Just when you thought you've had enough Vault 111 info over the past week, a new video surfaces, showcasing an extremely good-looking custom modded Fallout 4 Xbox One. 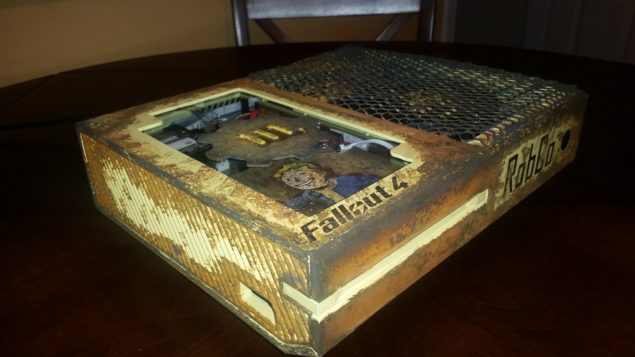 Past week has been Fallout 4 week, with massive leaks erupting from every little internet hole possible. To keep you hyped for Bethesda’s latest, YouTube user Thorhack has shared his custom-modded Fallout 4 Xbox One.

I have to admit – this mod looks fantastic, and looks like it comes straight from the post-apocalyptic Fallout world.

I am a massive Fallout fan, and I'm helping drive the hype train!!! Whoo whoo! This took me about two weeks, I learned a lot and I'm incredibly happy with how this project turned out. Hope you guys like it as well! The suspense for this game is figuratively killing me. I hope Bethesda appreciates my contribution. Please somebody show Todd Howard!

Thorhack also left some additional pictures on Reddit , which can be seen below.

Fallout 4 will be releasing next week, on November 10. The game was officially announced ahead of its E3 reveal by Bethesda, and sets the player into a world destroyed by a nuclear-war.