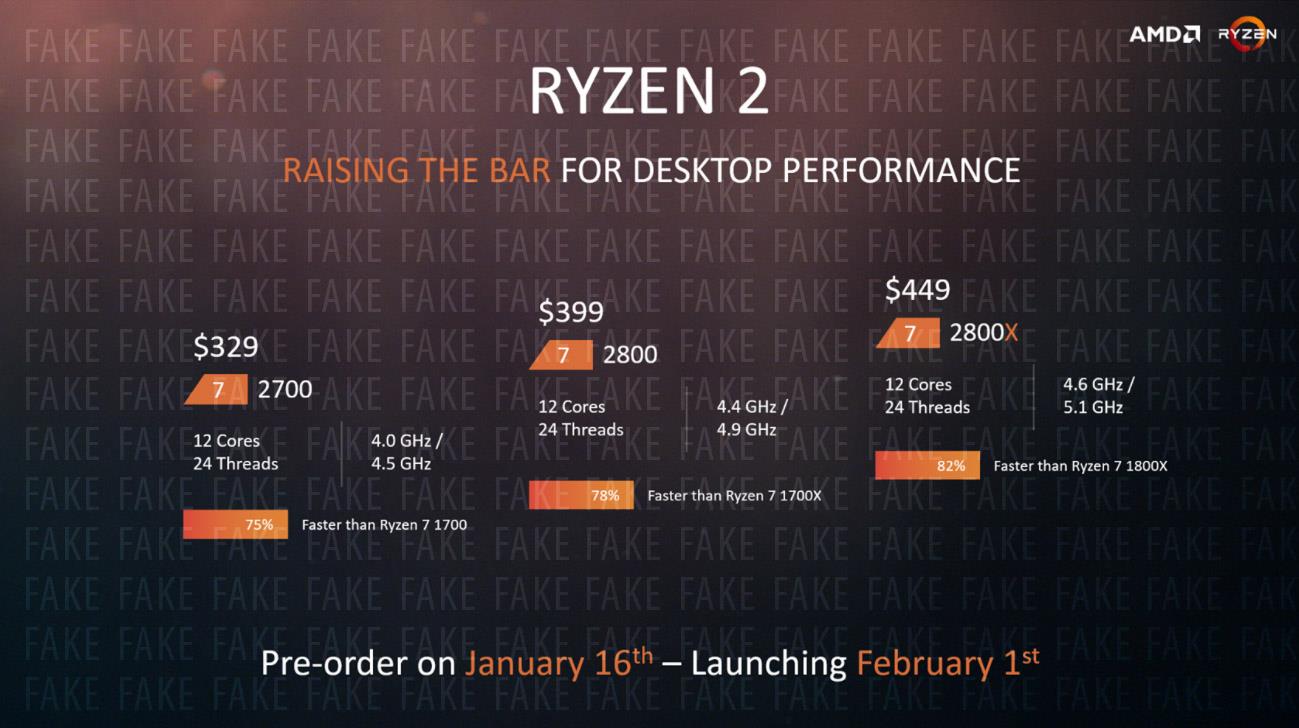 A purported "leak" has been making the rounds on the tech news media showing three alleged upcoming Ryzen 7 2000 series CPUs, Including Ryzen 7 2800X, 2800 and 2700. The slide in question is surprisingly detailed, outlining specifics such as core & thread counts, clock speeds, prices and launch dates.

The optimists among you will want to believe that this is true. After all who wouldn't want to see 12 core Ryzen processors for as low as $329 and with clock speeds as high as 5.1GHz, coming out on the 1st of February no less. The skeptics among you will point out that the specifications, pricing and timeline are all too conveniently fantastical. Sadly, the rumor has spread like wildfire with no evidence, other than the slide above, to corroborate any parts of it.

What's more, none of the news media reports surrounding this slide that we've come across include any references to its original source. And unfortunately, seemingly no effort has been put forward to identify the original source that had allegedly leaked it.

As a matter of policy we ignore any unsubstantiated rumors or leaks that we're unable to corroborate through our secondary sources. This time however, we decided to make an exception after seeing how quickly and wildly this fake slide has spread.

After seeing it for the first time it immediately jumped out at us as a fake for obvious reasons, but we've also tried our best to do our due diligence and ran it through the usual channels which have so far been coming out in agreement that it is indeed fake. We took it a step further and analyzed the slide forensically. Apart from dead giveaways like the fact that the font for some of the characters displayed in the slide is different from what AMD uses in its own slides we've also found evidence that indicates the image has been visually manipulated/edited.

We have also attempted to track the original source of the image down and after some effort we believe we have successfully done so. The image is more than a month old, and we believe that it made its way through the web via 4chan. We also believe that it was meticulously crafted to intentionally mislead and fool, rather than exist simply as a product of hopeful conjecture or a joke by some random enthusiast on some tech forum.

And as if 12 core mainstream Ryzen 7s weren't enough we also found a couple of other silly... I'm sorry "leaked" slides allegedly showing AMD's upcoming 3000 series Threadripper CPUs. Chips with as many as 24 cores and 48 threads and clock speeds as high as 5.5GHz...

Yes folks, we're apparently supposed to believe that AMD's new Threadripper lineup is comprised of diamond melting products. The same source also claims that the Ryzen 2000 series will be built on 7nm technology which we also know to be completely false.

If you want to know when AMD's upcoming Ryzen 2000 series lineup will be out and what the new parts will actually bring to the table, yesterday's article has you covered. In the meantime, try to take all rumors with the usual grain of salt.