AMD released its 2nd generation Ryzen CPUs to much fanfare earlier last month. The Ryzen 2000 series ticked all the boxes, by delivering significantly better computational capabilities, power efficiency and gaming performance at every price point. It comes as no shock then, that the overwhelmingly positive reception would contribute to meaningful market share growth for the underdog against its much larger rival Intel.

AMD's CPU market share rose from 11.15% to 15.96% in the single month of April alone according to the latest Steam Hardware Survey, amounting to no less than a 43% jump in the company's unit share in the CPU market.

[UPDATE 12:47 PM ET , Friday May 5th 2018]
Steam has published a statement affirming our earlier suspicions. The Steam survey has been updated to avoid over-counting of Chinese internet cafe systems, which had over-inflated NVIDIA's and Intel's market share. The April figures merely reflect the effect of the newly applied fix.

The latest Steam Hardware Survey incorporates a number of fixes that address over counting of cyber cafe customers that occurred during the prior seven months.

Historically, the survey used a client-side method to ensure that systems were counted only once per year, in order to provide an accurate picture of the entire Steam user population. It turns out, however, that many cyber cafes manage their hardware in a way that was causing their customers to be over counted.

Around August 2017, we started seeing larger-than-usual movement in certain stats, notably an increase in Windows 7 usage, an increase in quad-core CPU usage, as well as changes in CPU and GPU market share. This period also saw a large increase in the use of Simplified Chinese. All of these coincided with an increase in Steam usage in cyber cafes in Asia, whose customers were being over counted in the survey.

It took us some time to root-cause the problem and deploy a fix, but we are confident that, as of April 2018, the Steam Hardware Survey is no longer over counting users.

AMD CPU Market Share Jumps 43% in April Alone, According to Steam Survey - But Did it Really?

A 43% growth in unit share in a single month is unprecedented. We simply have never seen anything like it reported by the Steam survey, ever.

As much as the folks over at Steam wouldn't like to admit, the Steam hardware survey is less than perfect at representing the broader market to put it gently and has had a spotty history when it comes to accuracy over the years . The survey's CPU and GPU figures have never matched those routinely published by the rest of the market research community.

Why The Steam Hardware Survey Sucks

Well established market research firms like Jon Peddie and Mercury Research have always painted a different picture of the market than the Steam Survey for as long as Steam had been running it.  The survey figures have tended to especially under-report AMD hardware, both on the CPU and GPU sides. Often times by a very significant margin. For example, in the first quarter of 2018 the Steam survey had AMD's CPU market share at 10%, which is half what it actually was at the end of the quarter. 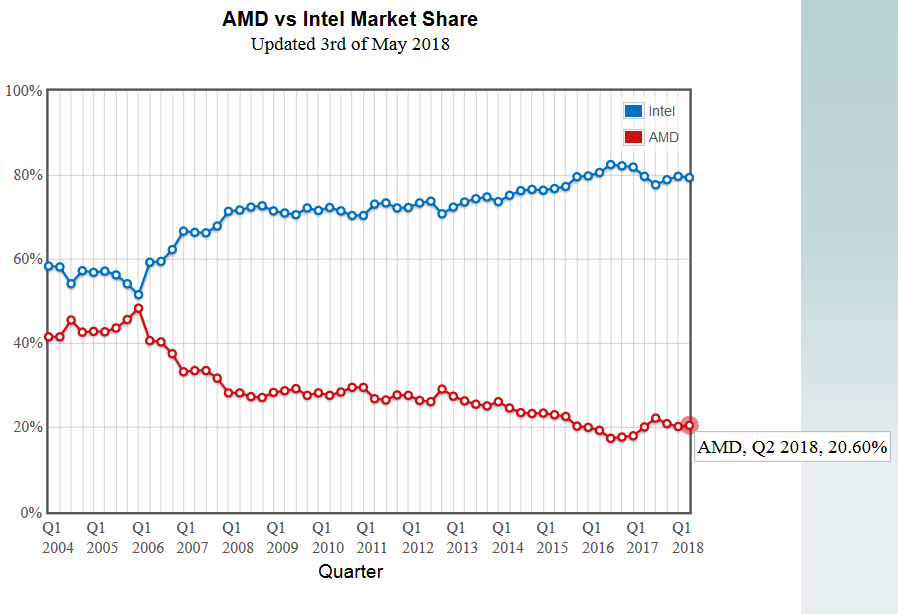 One key factor that has often been cited to explain the disparity is that the Steam userbase represents only a small subset of the PC market. Although within the PC gaming market itself the Steam survey has also been wildly inconsistent in many regards, except in its ability to significantly under-report AMD hardware. There have been a lot of theories and speculation as to why that is, but the phenomenon has never been fully explained.

The jump for AMD we're seeing in April is likely the result of an improvement to Steam's ability to detect AMD processors, rather than a massive and sudden share gain. We do hope to see the Steam Hardware Survey become more reliable in the future, because unfortunately at the moment none of the CPU & GPU share figures that it reports can be taken seriously.