Over the years, we've learned that Facebook doesn't have its users' best interests at heart when it comes to handling sensitive information. If you still think that Facebook will handle your data responsibly, that's on you. Facebook just unveiled its market research app called Waypoints. The app will award you for partaking in surveys via points that can be redeemed for money.

Once you've signed up for Facebook Viewpoints, you'll be asked to participate in short surveys known as 'programs.' Successfully completing a program will net you points. Rack up enough points and you'll be able to redeem it for cash. For example, 1,000 points give you all of $5 via PayPal. Since this whole endeavor is relatively new, it is unclear as to how many points a survey will net you.

Based on what we can see in the screenshot below, it is possible to get 1,000 points by engaging in a fifteen-minute survey comprising of 83 questions. It is unlikely that all surveys will be that long,  so it's best if we treat it with a healthy dose of skepticism. 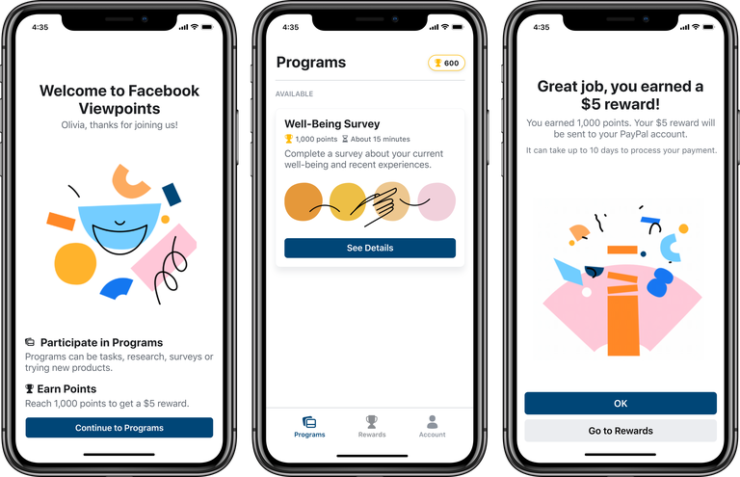 Facebook promises that they'll handle your data responsibly and won't sell it to third parties. The company says that these insights will be used to improve their services such as Facebook, Instagram, and WhatsApp.

Facebook Viewpoints is available only to users who are 18 years old or above in the US. Additionally, each individual 'program' will have its own set of criteria that one needs to fulfill. Facebook says that it will make Viewpoints available in other regions over the next year. The app is available on the Google Play Store and App Store.

Facebook Gaming Streaming Service Is Now Live in the US

Facebook Introduces Campus; a Place for College Students to Interact and Virtually Hangout