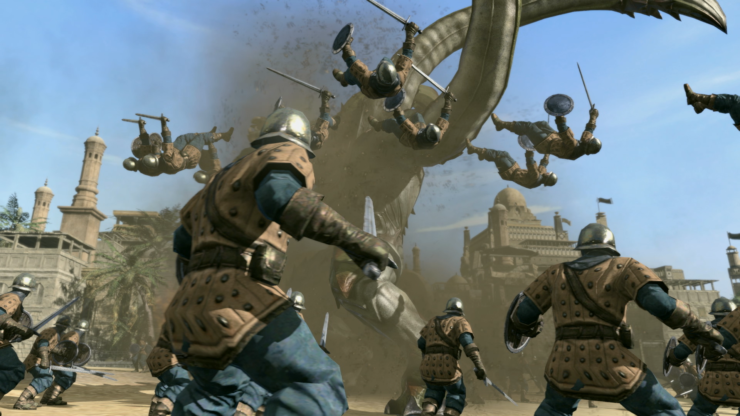 Kingdom Under Fire II is coming soon. Admittedly, even writing these words feels a bit unreal after over ten years of waiting for the MMORTS/RPG hybrid game, sequel to Kingdom Under Fire: The Crusaders, and yet publisher Gameforge will launch the game next month in North America and Europe for PC.

Today, we're delighted to unveil exclusively on Wccftech two of the five classes that players will get to pick in the game: the melee warrior 'Berserker' and the ranged mage 'Elementalist'.

Summary: In the carnage of battle, the Berserker stands out for his brute force, huge health pool and staying power. Drawing on a core of rage, he can carry out debilitating attacks while benefiting from a shield that absorbs damage. Armed with weapons imbued with dark energy, he is the ultimate front-line warrior, capable of smashing enemy ranks with his obliterating attacks.

Lore: Legends from a mysterious race of Exiles spoke of a great man with unparalleled power who was destined to be the one to unite and lead the Exiles. There was such a man, who listened to the ancient legends and began a quest to find the sword once wielded by the mightiest of creatures. However, just as he was about to attain the glorious goal of all the Exiles… he was viciously betrayed and lost everything. After barely managing to survive, he turned to the Azilia Knights of a faraway land to regain his power and one day punish his betrayer.

Summary: The Elementalist is a skilled and versatile mage, capable of channeling the power of the elements in both attack and defense. Don’t be taken in by her diminutive stature: despite her size, she can use magic to summon companions to fight at her side and terrorize her opponents.

Lore: There was once a garden of the Elementalists in the Elven holy land that was unknown to humans. Elementalism is an ancient secret, kept hidden by the Elves… This lost power began to manifest itself among some of the Elves after the War of Heroes, and a baby with great potential was born, just as the Elves had predicted. The elders believed that the land of heroes would be the most suitable place for the child to start its journey into the world, so the child headed for Azilia, the state of freedom.

We'll have more on Kingdom Under Fire II ahead of the release, so stay tuned.

Kingdom Under Fire II Gets Info & Media Blowout From Gamescom 2015