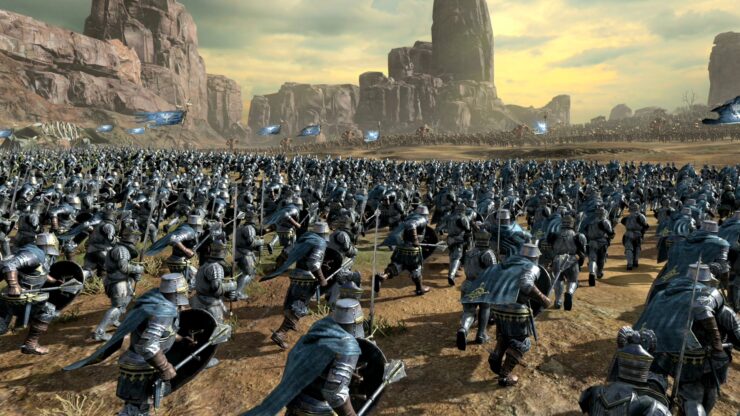 Kingdom Under Fire 2 just might be the long-lost Korean brother of Duke Nukem Forever when it comes to game development time. Originally announced in 2008, the ambitious MMORPG/RTS hybrid (sequel to the highly acclaimed 2004's Kingdom Under Fire: The Crusaders for the original Xbox) seemed to be in literal development hell for a long time. Then it became available in select Asian markets and later, briefly, in Russia, but never truly made it to North America and Europe.

That is going to change soon thanks to publisher Gameforge. After that news, we reached out to Korean studio Blueside to learn more about this late, but still greatly anticipated release.

First of all, we have to ask: why did it take so long for you to find a Western partner to launch the game with? How was Gameforge able to convince you?

Kingdom Under Fire 2 is a hybrid game combining 2 very different genres. It takes a great deal of challenging spirit to develop a genuine hybrid game. Blueside and Gameforge are deeply committed to the quality of its games, we feel that KUF2 is ready to be fully published after further optimization.

We’ve decided to launch the game together with Gameforge because they are one of the western
industry leaders specializing in publishing games with long lifespans and hardcore communities who enjoy playing their games after many years. Kingdom Under Fire 2 is not just another MMORPG, as there is a big tactical component mixed in with all of the action, and we believe that Gameforge can help us introduce that to players across the world.

Is the game going to be free-to-play? If so, what kind of microtransactions will be found in the in-game shop? Will there be any loot boxes?

Gameforge will publish Kingdom Under Fire 2 as a buy-to-play (B2P) title. Through KUF2 was released as F2P title in other regions, Gameforge will publish KUF2 as a “buy to play” title, as we see this as the best approach to ensure the best possible game experience fitting the content of the game. We are still evaluating in-game purchase options at this time but will have more information on this soon.

Earlier this year you closed down the Russian servers, mentioning it was due to your work on other projects. Was this referred to the Western release of Kingdom Under Fire 2? How do you plan to change the game from the Russian to the Western version?

The developers felt the game still needed some additional fine-tuning before releasing it globally. We have made troop acquisition and growth relatively less complex. Now it's easier to get more various troops than the previous Russian version, and it has been improved so that the players can set their desired troop configuration and engage in the mission. Also, the game has been improved so that players can enjoy various contents more easily by adjusting so that players can get more supply of gold, consumables, and materials. If there are more improvements in relation to the troops, the role becomes clearer for each troop.

Are you still planning to introduce the Paladin, Dark Sorceress and Vampire Prince classes? What about additional races, factions, and units (such as the Swamp Mammoth) for the recruitment pool?

We are working on optimizing the core content of Kingdom Under Fire 2, which are the
current classes and the troops. New troops and classes like the Paladin and Dark Sorceress are currently also under development, and we will have more to share on these topics following the launch.

Will the faction reputation mechanics return in this version?

Although the reputation system presented certain challenges, we continue to receive positive
feedback from players and testers regarding its function. We are still analyzing this topic and will have more to announce as we get closer to launch.

Do you plan to regularly collect feedback from the Western community to improve the game
accordingly? How often do you think we can expect updates, and will those be free, paid or a mix of both?

Absolutely. Feedback from our testers and our players has always played a very important role
in the development of this game. We are currently planning a thorough and detailed plan for the content update cycle and how it will be published. More on this soon!

Did you update the graphics engine to make sure it's up to par for a game releasing in 2019? If so, can you detail the improvements made?

We have been developing the game with a heavy emphasis on optimizing and speeding up the large-scale combat by taking advantage of the Blueside engine. Currently, we are striving to develop content, such as the expansion of troops and improvement of war contents, rather than graphic improvements that are not as crucial for the gaming experience given the rich graphics that are already available.

The press release only mentioned KUF 2 coming out on PC, but I know you were also working on a PlayStation 4 version of the game. Is that, or any other version of KUF 2, still coming beyond PC?

Kingdom Under Fire 2 has been perfected for PC, and now we are ready to focus on additional
platforms.

Is the PC launch to be expected in late 2019 (November-December) or a bit earlier than that?

We will fully launch the game with Gameforge for PC in November 2019 (pre-orders are live now on the official site), with additional free content updates included with the initial purchase following the launch.

Is there another currently unannounced game you are working on, or are you still focused on expanding Kingdom Under Fire 2 for years to come? In the latter case, can you talk about some of the things that might be added to the game?

Perfecting Kingdom Under Fire 2 and developing additional content to follow the launch are
currently the highest priorities of our company, and also to work actively with our publisher Gameforge to have the players to continue to enjoy playing our game.