Escape From Tarkov May Be Coming To Consoles; New Stunning Screenshots Released 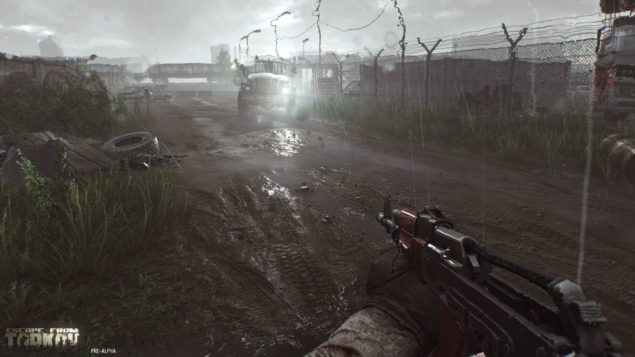 Escape from Tarkov is quickly garnering a lot of attention among hardcore gamers. Last month, we reported about its features and first gameplay trailer; now, Battlestate Games has shared more information through a FAQ, including the fact that they are considering the possibility to bring Escape from Tarkov to consoles.

Q.What is Escape from Tarkov? Who is the developer?
A.Escape from Tarkov is a hardcore story-driven MMO that combines FPS/TPS with RPG elements. It is being developer by Battlestate Games, the Russian game studio based in St. Petersburg.

Q.Will the game be free to play?
A.No, the game will be distributed as buy to play, bought once and for all. There will be no microtransactions in the game. However, we do intend to release paid DLCs later on.

Q.Will the Escape from Tarkov be a session-based shooter? What game modes is it going to have?
A.In the classic meaning of this term - no, the game won’t be session-based. It has several playing modes. The player only has one life, and, with dying, he loses everything that was brought to the location or found in it.

The first and essential mode will be available with the game release, the story mode. The game session (typically an hour or hour and a half long) will take place on a large, about 5-10 sq. km., open location. The player will have to consecutively clear all of these raid scenarios, with several possible exits, each determined by the game story. By completing one scenario, the player unlocks the next one. Players can return to the previously unlocked scenarios in search for particular loot or more detailed exploration (which can lead to the uncovering of side quests and locations)..

When all scenarios (there will be around 10 of them) are completed, a free roam mode will be unlocked. In this mode, player can move around a 15 sq. km. area without any time limits. Moreover, the game is going to have an Arena mode, which closely resembles gladiator fights.

Thus, although EFT technically does have a session in the scenario mode, it is only determined by the story, where player’s character has to escape from Tarkov. The free roam mode will have no time limitations, and in the Arena the game session will be limited by death either of player’s character or his adversary.

Q.Will Escape from Tarkov have a story?
A.Escape from Tarkov is a story-driven game, despite ins online foundations. Everything happening in the game will be determined by the story of either main chain of events or by numerous side quests. Side quests, by the way, can be handed out by traders, but some of them can only be discovered and solved by the player, without any hints whatsoever..

Q.Where and when is Escape from Tarkov set?
A.The events of Escape from Tarkov take place in an alternate universe around our present time, in the fictional Russian city of Tarkov, the northern industrial and financial center of the country, and its suburbs. The game events, in turn, set background for the Russia 2028 universe. The city of Tarkov is caught in a plight of the war between two private military companies, triggered by illegal activities of the Terra Group transnational corporation. For the reasons yet unknown, the situation in the city quickly went out of control and the local populace was evacuated. The only ones left behind were either private military contractors, the local Scavs gunmen or shady characters of unknown origin and allegiance. The details of the story can be found here -https://www.facebook.com/escapefromtarkov/photos/a.1495753754052273.1073741827.1495556504071998/1507450666215915/?type=3&permPage=1

Q.Can I complete EFT alone, single-handedly?
A.We do not intend to make an offline single-player campaign, though anyone is free to try and clear the game alone, without help from partners in co-op. However, we do recommend to find trusty partners for the final locations.

Q.What kind of RPG elements does the game use?
A.The main RPG elements in the EFT are the inventory system, leveling and character skills upgrade. New levels will be gained by acquiring new experience - combat, looting, healing, exploration, lockpicking etc.

There is one more thing that is truly unique about our bonuses and skills system. It is not limited by improving the stats of the character - he starts to to use different weapon grips, reload in a more skilled way, use medication smarter than before.
With every skill upgrade the player discovers new tactical opportunities, and the stats maxed to the top give access to the elite skills. Another new feature makes player forget skills that were not used for too long.
The inventory system is represented by a classic slot-based inventory, split into backpack, vest, pockets, weapon equipment slots, etc.

Q.Will there be clans or other types of player groups in the game?
A.Yes, the game will feature a clan system that will allow players to assemble their own groups. There are no limitations in terms of clan activity. It can be a combat-centered clan that hunts other players, or a trade guild that has both traders and loot collectors, or something else.

Q.Does the game have an economic system?
A.Yes, the game features a wide open dynamic economic system, where players will be able to trade both with other players and NPCs. The dynamics of economic system includes variable factors that are out of the player’s control. Floating exchange rates, shortage of goods, even trader’s health - all of this is controlled by the game AI.

Q.How realistic is the game?
A.The team of developers loves hardcore and realistic games, and, naturally, we would like to make EFT as realistic as possible in all aspects - health, combat, inventory management, character interaction, graphics, sound etc.
Your character can fall victim to a number of hazardous influences, such as wounds, infections, dehydration, starvation and so on. He is also affected by hypothermia, concussions and obfuscations. Players will have to use correct medications at the right time, load weapons manually, use it carefully to avoid jamming... The list goes on.

Q.How realistic is the shooting physics?
A.Shooting physics, as well as weapons and their customization, are something we are very proud of. The weapon is going to behave very realistically in combat, it will have recoil, jamming, misfiring, and bullets will have real ballistic model - they will shift trajectory after hitting an obstacle, will split and ricochet. Even the propellant gases will exit the muzzle brakes just like in the real life.

Q.How deep is the weapon customization?
A.You already may have had a quick look at how detailed the customization is in the Action gameplay trailer. Almost any detail can be removed and replaced. The customization offers the degree of freedom that will allow any player to create a unique weapon configuration that suits his or her playing style. Customization includes the change of mags, installation of flashlights and laser pointers, tactical grips, various scopes and so on. On some weapons, even the trigger or charge handle can be replaced.

Q.How many weapons will the game have?
A.Many. For instance, we are going to have absolutely everything from the AK lineup that was ever issued. Beside weapon customization, we are also going to let players build their own MOLLE systems, adjust clothing and other equipment. .

Q.Will there be an item crafting in the game?
A.The game is going to feature crafting, but not in the classic game meaning of this word. You won’t be able to make a machinegun out of wooden plank, duct tape and screws. The weapons can only be assembled from the real weapon parts, e.g. you can assemble the AK74M only if you find all of its details (mag, receiver, dust cover, bolt, barrel, etc).
Apart from weapons, there will be other items to combine as well.

Q.Will the game be available in Steam?
A.Yes, we do intend to release on Steam.

Q.Will the game support Steam Workshop and player modifications?
A.Maybe. Workshop mods will be properly evaluated by us to be accepted and introduced into the game. Mods that alter gameplay will not be allowed, since the game is online-based.

Q.Shall I have to buy early access to play the closed beta?
A.No, that is not a requirement, though, naturally, pre-ordering players will be guaranteed access. The rest of the beta participants will be selected from the newsletter subscribers.

Q.What are the hardware requirements? Will the game support gamepad?
A.The hardware requirements are yet to be determined, but we will try to keep them as low as possible. Right now, the game shows 120+ FPS with ultimate graphics on the PC that is above average, but not overpowered.
We have already tried playing with gamepad in one of the experiments, so there is a possibility that it will be supported.

Q.What is the engine that powers the game? Will there be a cross-platform Mac and *nix support?
A.The game is based on Unity 5, but many essential functions were created by us from the scratch. We plan a Mac release, but it is yet unclear if the Mac players will play with everyone else on common servers.

Q.Is this game related to the Stalker?
A.There have been numerous mentions on the net that label Escape from Tarkov as a game that is being developed by "S.T.A.L.K.E.R. creators" or "S.T.A.L.K.E.R. developers". Hereby we officially disprove this claim. There is exactly one person on our team that has worked on the S.T.A.L.K.E.R. before, so it would be massive overstatement to assert our project this way.

The Battlestate Games developers have previously worked on multiple projects in a variety of genres; however, we share a common passion for the quality hardcore shooters, which are yet so few.

Q.What about the console version?
A.We are considering it, but it’s too early to talk about that.

Q.How do I sign up for beta?
A.As was mentioned above, preordering the game opens up a guaranteed beta access. However, due to the large scale of the testing, we will also need the help of the lucky people who will be chosen among our newsletter subscribers - http://www.escapefromtarkov.com/signup/

Q.When are the beta testing and release of the EFT?
A.The closed beta is planned for the first quarter of 2016, with release in the second quarter.

Q.I trust my level design (modelling, programming etc) skills and would like to join the team. Are you hiring, and, if so, what are the requirements?
A.If you really have professional experience in the game development industry, feel free to contact us at hr@battlestategames.com with your speciality in the subject and attached CV. We are always looking for talented experts for our team.

Q.Are you financially independent or is there a publisher or sponsor? What should I do if I want to finance the game?
A.Publishing and sponsoring offers can be sent to info@battlestategames.com

Q.Are you going to make a special edition with artbook / figurines / caps and so on?
A.Yes, oddly enough, but we plan to make a box version of Escape from Tarkov, including special edition.

The Russian studio also shared some beautiful new screenshots of Escape from Tarkov and a new trailer focused on inventory and looting. Check them both below.