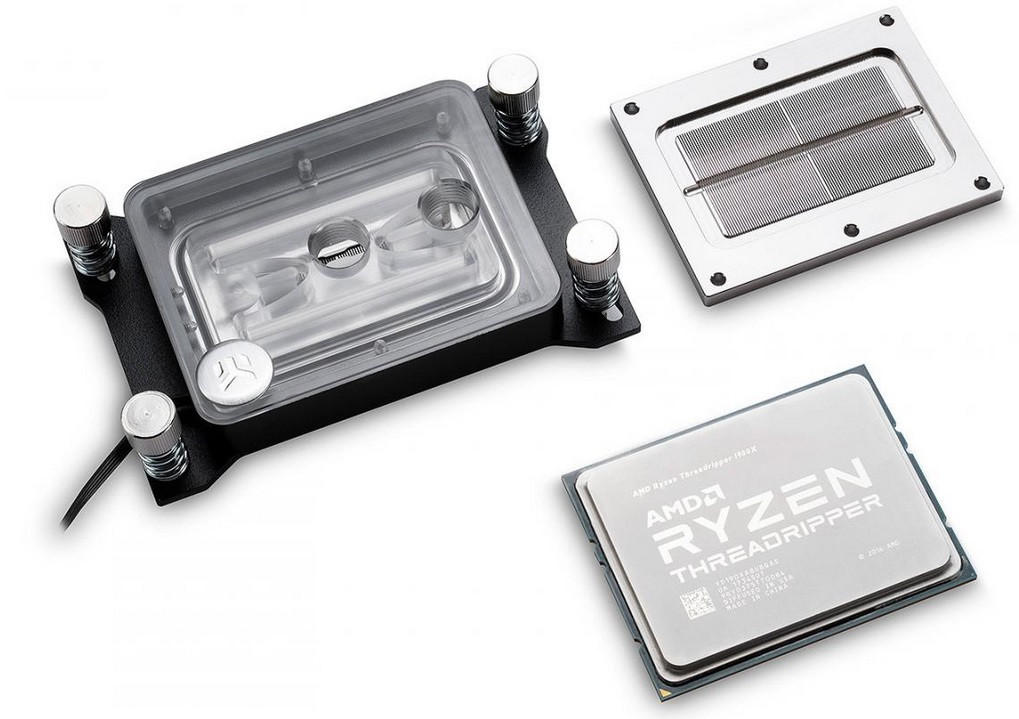 EK is now releasing dedicated EK Supremacy sTR4 waterblocks that are specifically designed for AMD Ryzen Threadripper processors, they are also releasing new RGB variants of their Vardar fans which come in 120mm variants. For the Supremacy sTR4 the cold plate covers the entire IHS of the AMD Ryzen Threadripper processor and the fin structure is fine-tuned for multi-die CPU cooling. The new Vardar fan also packs the Extended Range (ER) of PWM operation feature and the special Start-Stop function which brings a true 0dB experience for the absolute silent fan operation. The electronics of the new EVO 120ER RGB fan has been specially tweaked so that the fan stops spinning if the PWM signal falls below a certain duty cycle value. Not only will you be able to enjoy a totally silent PC, but this feature is also very useful for preventing radiator dust buildup in idling PCs and prolongs the life cycle of the fan itself.

The EK-Vardar RGB is a high-static pressure computer cooling fan, designed and built primarily for highest-performance computer liquid cooling systems. The Vardar family of cooling fans carries the notorious name of a type of the cold northwesterly wind blowing from the mountains down to the valleys of Macedonia. It is a type of ravine wind, enhanced by a channeling effect while blowing down through the Moravia-Vardar gap, bringing cold conditions from the north to the Thessaloniki area of Greece. Most frequent during winter, it is blowing in the rear of a depression when atmospheric pressure over eastern Europe is higher than over the Aegean Sea.

The perfectly balanced milky colored 7 fan blade design is optimized for light dispersion and high-pressure operation while maintaining the low noise profile throughout the whole operation range of the fan. Under the motor hub, there are total 9 LEDs making this the brightest RGB fan on the market, ensuring perfect light diffusion at broad daylight as well. The fan uses the standard 4-pin LED connector used on many motherboard RGB connectors.

The Start-Stop function featured with the EK-Vardar EVO 120ER RGB models will ensure the user a true 0dB noise environment. When fan curve is set with the minimum threshold point below 25-30% PWM duty cycle (depending on motherboard model), the motor and the electronics will turn off and the fan will simply stop spinning. EK-Vardar EVO 120ER RGB restarts operation automatically as fan control ramps up its operational duty cycle past threshold start-stop point. EK-Vardar EVO 120ER RGB models also feature Double-Ball bearing which has superior durability compared to Hydro-Dynamic bearing. Double-Ball bearing fans can tolerate higher temperatures and can be mounted in any axial orientation without concern for bearing lifespan degradation.

The release of AMD X399 chipset based HEDT processors opened new opportunities and challenges for cooling solutions. EK was first on market with a liquid cooling solution, but now it's time to go for the pole-position. The primary goal in designing the new EK-Supremacy sTR4 water block was to cover the entire IHS of HEDT AMD Ryzen Threadripper processors and to optimize the fin structure according to the CPU die layout. A dense micro-fin structure that counts 91 grooves is split in half in the center so that the CPU dies are cooled more directly. The water block features a patent-pending technology called TDC (Targeted Die Cooling), which is a unique approach to cooling of multi-die processors in order to maximize the cooling performance of every single die by addressing them directly.

Every EK-Supremacy sTR4 water block comes with a precisely machined copper base (sometimes referred to as 'cold plate') which is made from purest copper available on the market and is treated with nickel electroplating. Unlike some other CPU blocks, the sTR4 comes with a diamond cut unpolished cold plate to achieve the best possible contact with the IHS of the AMD Ryzen Threadripper processor, thus enabling better thermal transfer. The top is made from CNC machined POM Acetal, acrylic glass or nickel-plated brass (depending on the variant).

All mentioned water blocks are enclosed with a small tube of high-performance Thermal Grizzly Hydronaut thermal grease. It's suitable for high demanding users and for overclocking due to its excellent thermal conductivity. The thermal grease consists of a silicon-free structure, this makes it very light and highly flexible and easy to apply. It's recommended that users follow the EK-Supremacy sTR4 water block installation manual for the suggested method of thermal grease application for the best-expected results.

They are announcing 4 versions of the Supremacy sTR4 waterblocks

The base plate is covering 100% of the of the AMD Ryzen Threadripper processors Integrated Heat Spreader (IHS). The EK-Supremacy sTR4 cooling engine implemented into the water block is the key to a high-flow design with low hydraulic restriction combined with high-performance cooling. The RGB version of the EK-Supremacy sTR4 water block is compatible with popular RGB sync technologies from all major motherboard manufacturers. The arrow marking on the 4-pin LED connector is to be aligned with the +12V marking on the RGB header. You can easily remove the LED strip cover which is mounted with two screws to replace the LED strip with some other type LED strip.

Gammaxx GT CPU Cooler has been Updated by DeepCool