I spent some time at the bigger sights Rezzed had to offer doing some red carpet chats with John Carmack and David Braben as well as talking to Creative Assembly about Total War: Warhammer which is coming soon, but now we get to the meat of Rezzed and for this article, I had a play around on Featherpunk Prime and a chat with one of the developers from Super Hatch Games.

As a side note to the article, Super Hatch are looking for testers so if anyone is interested in genuinely helping them test the game prior to launch, please email them at hey@superhatchgames.com to get more info. It's currently on Steam Greenlight and you can find out more about it here.

Featherpunk Prime is a modern retelling of the old school twin stick shooters. It’s a side-scrolling glory years, cyberpunk, flamingo laden shooter with continuous action, weapons, upgrade tech trees, and bad guys aplenty. I spent some time attempting to get to grips with it and had various pieces of my anatomy handed to me several times over. It’s been a few years since I played a game that was this fun! The sound is also a great piece of any good thumping shooter like this and you can tell that Super Hatch have devoted proper attention to it. 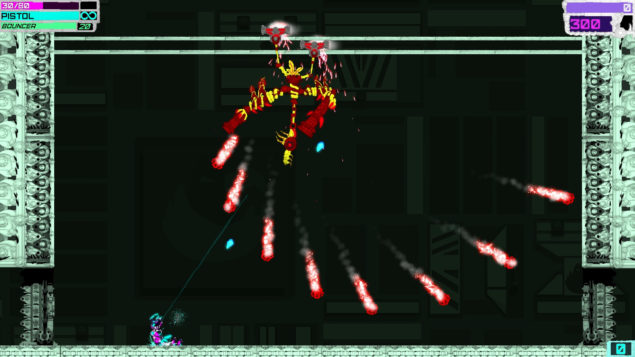 It's time to get your feather on...

The basic principle is that you’re a kind of cyborg flamingo gone rogue. Normally the cyborg flamingos are programmed robots who do the bad guys bidding, but you are a hero from another era. Taking on the evil hordes in twin stick shooter glory!

Basic mechanic controls are as you’d expect. It’s a 2d scroller with one stick being movement, the other being 360 aim. You also have jump and shoot along with various power up abilities. As with many good games, easy to pick up, difficult to master is the order of the day and the action is good and keeps you on your toes, constantly moving and shooting, jumping, dodging and aiming.

I sat down to have a chat with Dan, one of the makers of the game.

D: So it’s a team of two of us as the core guys who make it are ex-Sony developers, I used to be a gameplay programmer at Sony and Steven used to be an animator, we’d work on augmented and virtual reality games most recently and have been inspired by lots of indie developers, saved up money to last us just long enough to make this game and we’re doing it!

W: So how long have you guys been working on this game then?
D: We left end of July last year and started working on the game, that’s Steve and I, we’ve also got a sound engineer who came onboard 4 months ago and some musicians as well so I can’t take all the credit as the music and sound are a big part of the game.

W: And the game is PC only initially?
D: Well we’ve built it for PC at the moment but we’re hoping to get onto Xbox too as it makes sense for a twin stick shooter since it’s quite a console controller friendly setup. We’ve built the game in Unity so it shouldn’t be too problematic for us to get it running there and we hope we can convince Microsoft! We’ll probably aim for a Steam/Windows launch first and see where we are with Xbox after but we’ll play it by ear. 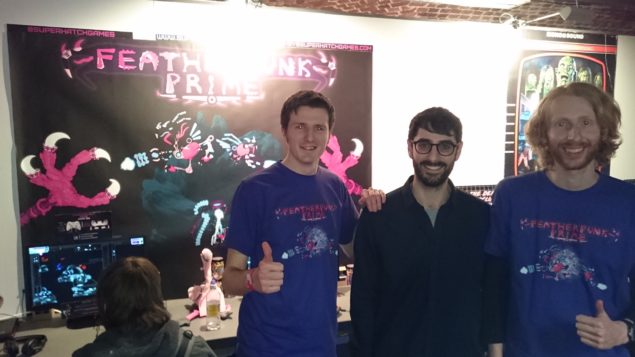 W: Inspiration for Featherpunk then?
D: Well we’ve obviously got this cyborg flamingo so there’s some inspiration from various cyberpunk things over time like Bladerunner and William Gibson and also then Sonic and some of the great mascots you’ve had historically. Personally I always loved Super Metroid and still have posters up of it at home but I also loved twin stick shooters like Smash TV or Robotron and Geometry Wars it was just part of my mind for a long time so you’ve got to find space and you’ll get waves of things coming towards you. We’re aiming for it not to be too easy a game but it should be ok for you to pick it up, play a bit, put it down and come back to it with relative ease.

W: Yeah, I saw you had these tech cells in the game…
D: Tech cells that’s right, it’s kind of your tech tree with all these abilities, weapons and moves. We’ve got a few things in prototype in there at the moment that we’re looking forward to sharing as well. We’re aiming for a Steam release in August so hope to have all those things nailed down and finalised soon before the year end AAA games all launch.

W: So what’s left to do to finish off the game? It already looked pretty complete to me.
D: Well it’s mostly content really, some extra weapons, abilities and bosses. We’re aiming for somewhere between 10-20 hours for a playthrough depending on the ability of the player and how much you want to upgrade your tech cells.

We’re thinking of a kind of new game + system where if you play through and upgrade your tech cells, you can start over with all the upgraded abilities you had and upgrade them even further but of course we’ll increase the difficulty of the game if you do that.