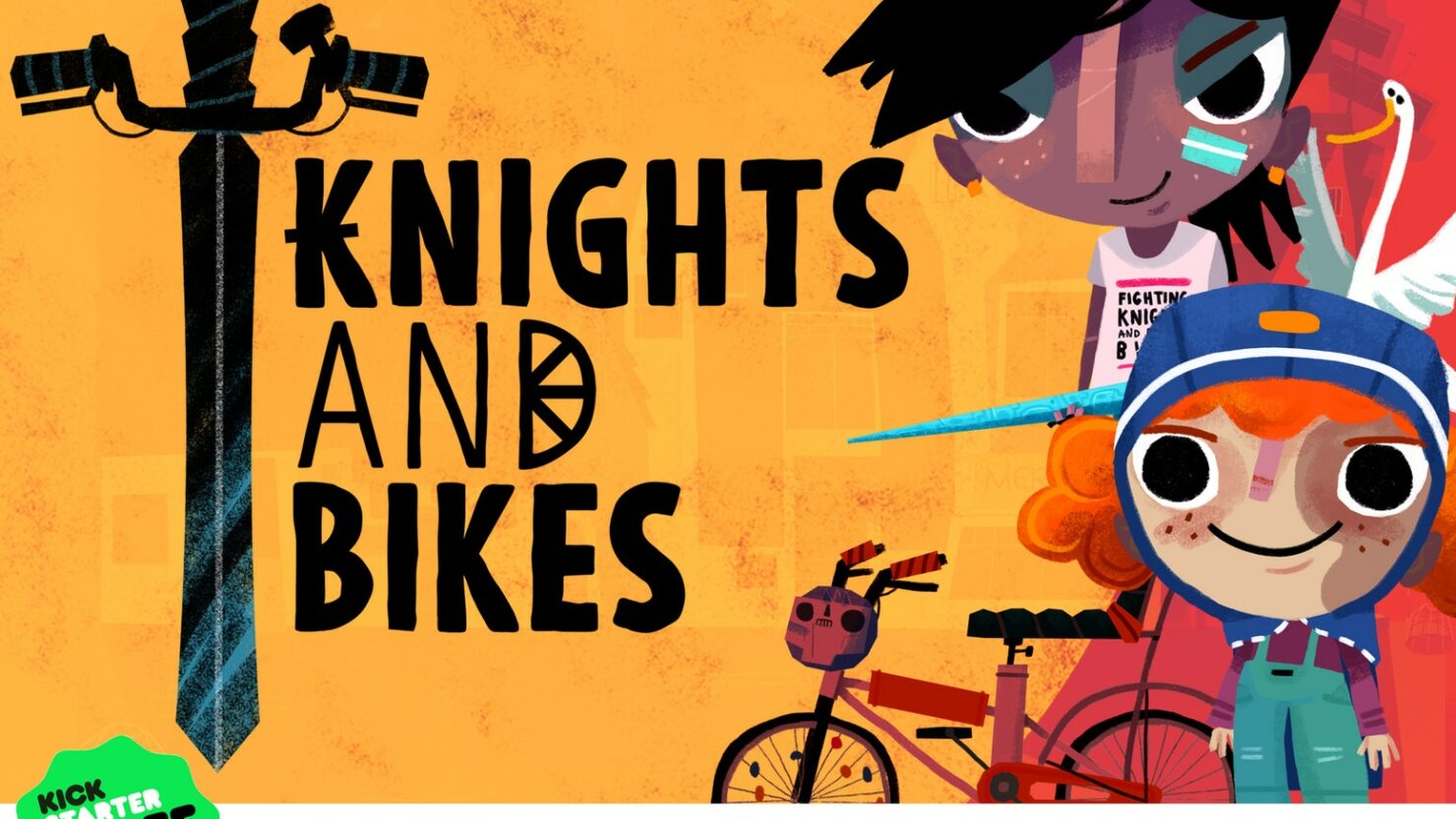 Do you remember when you used to have an extremely vivid imagination? A time where you could imagine a garden hose coming to life, attacking you like a Boa Constrictor. Where playing out with friends and going just two streets away was a huge adventure. My late twenties were a fantastic time, one recently brought back when playing Knights and Bikes by developers Foam Sword Games and publishers Double Fine at EGX Rezzed.

That's exactly what Knights and Bikes is, a story built all around the imaginations and the actions of children set in the '80s on a fictional island just off of Cornwall, UK. Specifically, the characters are two young girls called Nessa and Demelza, plus the childlike extravagance and whimsy that comes with the setting.

Everything within the game features the same childlike extravagance. You notice this from the very beginning thanks to the games beautiful art style, combining a colourful hand-drawn (or painted) style with the outlandish imaginations of the children brilliantly represented. From angry guard-Geese to the knights guarding and bandits trying to seize the treasure of the currently closed mini-golf course. A golf course that happens to be far more run down and decrepit than you would expect it to be. It's only the off-season.

The same running theme also applies to the abilities of each girl. Knights and Bikes has been primarily built as a co-op game, either online or local, letting each player play as a different girl. Nessa, there on vacation with her family, has wellies that let her stomp on the ground and kick things. She can also get her bike, which she naturally makes an audible "brum" sound to highlight the fact she's going fast. Demelza gets a flying disk (Frisbee is trademarked) that she can use to attack with, with Nessa able to kick it and knock it further away to extend the range. Or grief your co-op partner, because I know for a fact that if I could do that as a kid, I would have. It's all a bit of fun. Even more when you're healing your partner, which is done by giving them moral support in the form of a high-five.

Hell, I even did that while playing with one of the developers while at EGX Rezzed. Not only did I enjoy kicking his flying disk away, but I also loved stomping in puddles and kicking water from puddles at him (he took the role of Demelza). At my most cruel I kicked some Goose poo at him. Yes, you can kick goose poo. After feeding the Geese, they become happy enough that you can pet them but also, the food goes through their digestive system as you could expect it to. They poo it out. The fact that I could pet the Geese put a huge grin on my face. The fact they would poo out the food and I could kick it at somebody who asked me not to was more than enough to sell me on the game.

It would be so easy to think of Knights and Bikes as something just for a younger audience. However, just from what I saw in playing just half an hour of the game, that isn't the case. While it isn't exactly going to be a Sekiro in difficulty, there are elements you'll find yourself facing a bit of challenge. Sometimes this is as simple as figuring out how to hit a target that is further away (hint: Kick it with Nessa) or you'll be defending against waves of cardboard cutout enemies. That's just from the first level, or day as they are in the game.

From what I was told, the game will take place across six days, each day featuring a level as well as an open-world map of the island to explore. To go through the story, without exploring, it should take you around five to eight hours to complete. I would say that exploring should be rewarding enough if only from the loot that you collect. The loot flashes up on the bottom right of the screen and in the form of any random tat a child would normally pick up, from worms to stickers, rocks and... eyeballs. That one threw me off a little.

All things considered, Knights and Bikes is a game I'll be more than keeping my eye on. With a tentative release date over the next few months and releasing on the PC and PlayStation 4, with the potential of more formats in the future (it would be perfect on the Switch), I hopefully won't have long to wait until I can get my hands on and start petting more Geese.

Psychonauts 2 Will Have an Invincibility Mode, Devs Says Anyone Should Be Able to Enjoy Games