Just a few days ago Axiom Soccer was finally released into a savage, wild place where monsters, demons and the cruellest of society reside: Steam Early Access. Just a little before that I was able to get a hands-on with the game at EGX Rezzed and over the previous few days, I've also been able to supplement it with a little extra game time. Do I find it fun? Definitely. Challenging? Oh god yes.

Other thoughts? Well, I'm concerned that much like me, Axiom Soccer could be a little premature.

So why exactly do I think this? There are a few reasons. First and foremost, the user interface and menu system is, frankly, crap. While it is all self-explanatory in how you move from menu to menu, it's simply a slow process that dramatically needs improving. This is something that I mentioned during my time at Rezzed and fortunately, I was told by Colin Anderson of developer & publisher Earthbound Games that it's one of the first things they'll be working on improving. They're well aware of issues there.

Indeed, during my time speaking to Colin, the team were happy to raise and address any concerns I had, mostly before I was able to raise them. As it stands your time with Axiom Soccer will be spent playing in either 1v1, 2v2 or 3v3 matches. Yeah, the format you'll be more than used to from playing Rocket League, and it's impossible not to mention Rocket League when talking about this. Just to add a little element to the normal match, if you're drawing at the end then you will go to a penalty shootout. Sadly, there are no other game modes, though others are in development. I would have appreciated the ability to even just play penalty shootouts.

Other areas are also pretty thin on the ground at this point, though set the line on what's the come in the future for the game. There are only three drone types, three shot trails, a handful of paint schemes and similar things to choose from when customising your drone. Many of these, the standard ones, are unlocked through gaining experience while playing matches. However, this is where you can see where Earthbound will look to monetise Axiom Soccer.

Much like the League of Rockets, Axiom Soccer will monetise itself through cosmetic additions. However, and this is why I prefer the game already, you will simply be able to buy what you want directly. At least that's what I was told is the plan. No loot boxes, no keys. You see a drone, design, trail - whatever - that you want, jump into the in-game shop, buy it. Do you remember when games let you buy what you want and not pay for the random chance of receiving a piece of what you want? I do, it was a brilliant time.

Despite my issues with how thin the game has launched, there are positives. You can have a lot of fun just from playing the regular game mode. Part of this is how the game strives to differentiate itself from Rocket League. This isn't a case of driving your car into the ball - you have no car! Rather, you're in a drone and you will be shooting the ball, though you do have the ability to nudge into it too. The aspect of shooting the ball, which is also determined by the type of shot, the power and also where exactly you hit the ball determines so much. It also adds a tactical element as you pick between multiple shot types, from a grenade that creates a larger explosion to a machine gun shot that won't hit the ball far but offers a good amount of control, there's a lot to think about.

Most of all, there's a lot of teamwork in games with multiple players due to the energy restrictions on shots, energy that can only be recovered by sitting in your own box. There's a lot to be said for communication in games like this, where you'll actively have to tell somebody you're heading back to recharge. Another element that could cause a lot of confusion is the inclusion of a keeper. Essentially, this is a big wooden board that you can direct within your net to try and 'save', or more accurately block a shot, which is done simply by clicking an area of your net with the middle mouse button. More than one of you clicking? Well, I can imagine things will get a bit confusing.

Within a game, you will also have other things to think about, not just the physics of the ball or even if you want to hover further off of the ground with your drone. Yes, you can fly, and I honestly recommend it, though only a little high. Why? Another element found in the fields of Axiom Soccer are activatable buttons which send blocks raising from the ground, acting as an obstacle to both the ball and any players who have forgotten they can actually fly. Everything adds just that little extra to the game, moving it further away from the Rocket League comparison. 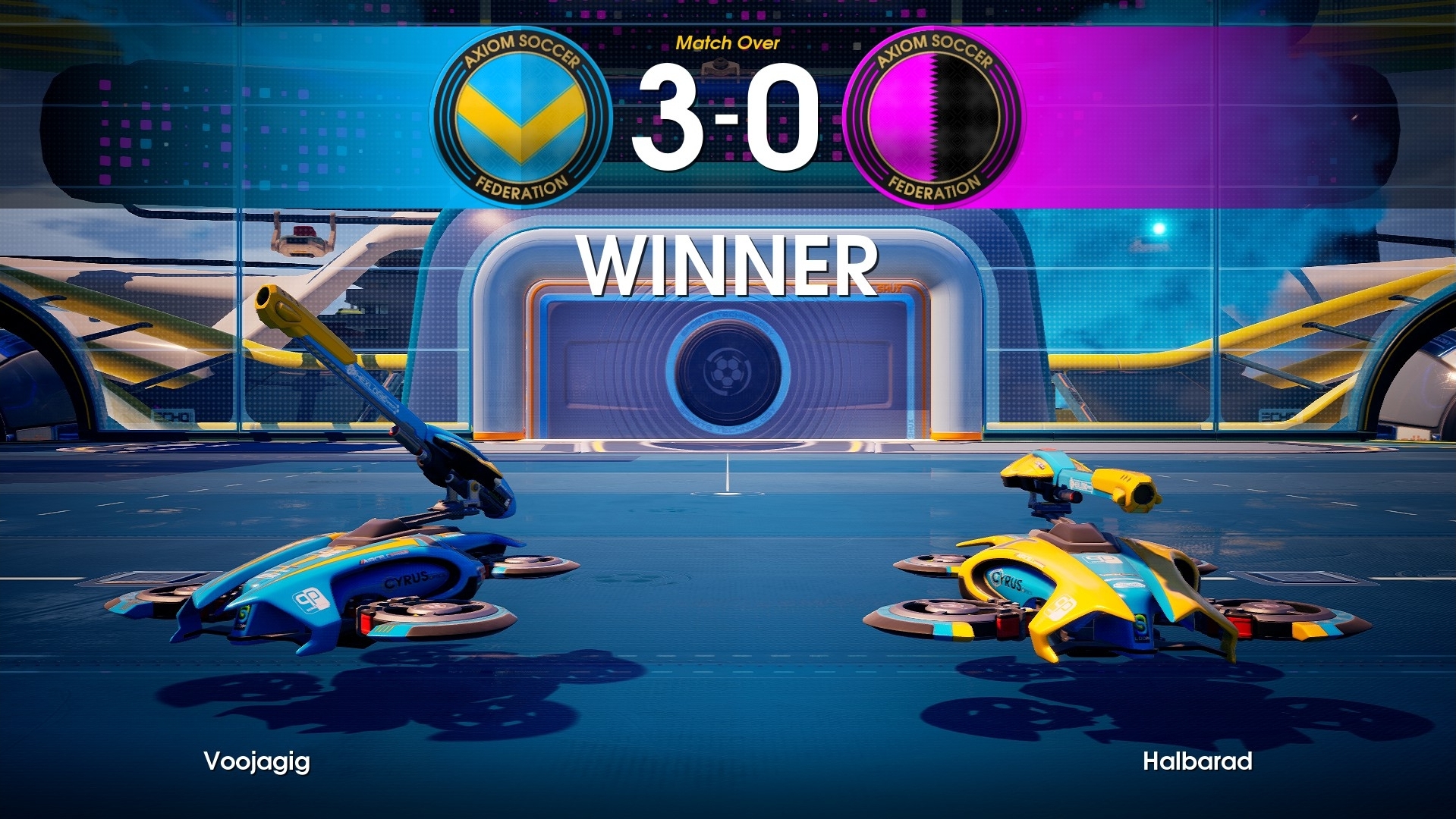 The thing that moves it furthest away is actually playing it. This is a game designed for Mouse & Keyboard because this isn't a driving/flying game with guns added in, this is a third-person shooter where you just so happen to be controlling a drone, where the objective is to shoot the big ball and get it in the oppositions net. Let me tell you, it's certainly enjoyable, especially when the chaos starts and the ball is flying around like a lunatic. That's when the stasis shot helps, stopping the ball dead.

Another smaller difference is just how this has been built for eSports. It's not a game that has thought about eSports after the fact, every facet has a link there somehow. One of the primary examples comes from the audience of a match, which if you look are monitors. People can view a match and they will be visible in the audience. Not only that, those in the audience will have the ability to interact with the match, throwing up flares and such as that to show their support for a particular side.

Despite how fun and engaging the gameplay is with Axiom Soccer, I can't completely shake my concerns. Will people jump in and give the game time enough to see if they enjoy it? Will the menus put them off? Will the lack of extra game modes and the current small number of players leave the game feeling dead? All in all, was the launch just a little premature? Only time will tell when it comes to truly answering those, and other, questions. With the passion that Earthbound have, I have no doubt they'll get it to a great state, it's just if the players will be there for it.