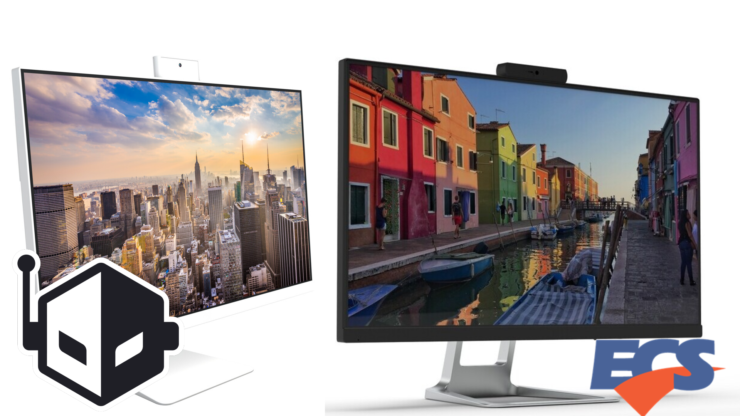 EliteGroup Computer Systems or ECS has announced two new All-in-One PC models called the E22-MH410 and the E24-MH410. Both of these models are designed to be powerful and feature an elegant style for any home office or as a home PC. Both of these models feature Intel's 10th generation processors and use the Integrated graphics from these processors. ECS has yet to announce the pricing for either of these All-in-One models or when these models will be available for purchase.

The EliteGroup Computer Systems, or ECS, has announced the E22-MH410 and the E24-MH410 all-in-one PC models. These models offer uncompromising performance, partly due to the Intel 10th generation processors and DDR4 RAM with a RAM speed of 2,666. This unparalleled performance also offers support for dual storage, combining the breakneck speeds provided by M.2 SSDs and a larger capacity but slower, 2.5-inch SATA drive. This dual storage allows for faster boot times, while the 2.5-inch SATA connection allows for easier mass storage.

These models' design is incredibly similar; both the E22-MH410 and the E24-MH410 AiO PC utilizes a 21.5-inch and 23.8-inch screen, respectively. Both of these screens support Full HD resolution that delivers stunning visuals while offering high color accuracy for photo or video editors.

These models also have the option to include a 10-point touch screen that supports swipe, scroll, drag, and pinch gestures, which are perfect for any user who wishes to navigate a webpage or scroll down on a long word document. These models come included with a 2 MP webcam allowing for clear and concise video conferencing for nearly any home office; the webcam is also certified with Windows Hello, which allows for easy unlocking of the computer.

Both the E22-MH410 and the E24-MH410 AiO PC feature similar connections, having two USB 2.0 ports, two audio jacks ( split into one headphone and a single microphone jack), a single Multi-card reader (which is optional). These ports are all located on the side of the device; the rest of the ports are located towards the models' rear.

The Rear IO included one Gigabit LAN, one HDMI output, one D-Sub, two more USB 2.0 ports, and two USB 3.2 ports. ECS has yet to release pricing for either models or availability for either of these models.