Ubisoft Montreal has revealed its next big game today at Ubisoft’s E3 2015 press conference. Coming as a brand new IP in a new genre, For Honor is a melee-only multiplayer-focused combat game that will allow players to fight brutally against each other in three factions: vikings, knights, and samurai. Offering smooth and a unique gameplay experience, For Honor will be released as a next-gen exclusive title on PC, PlayStation 4 and Xbox One in 2016. 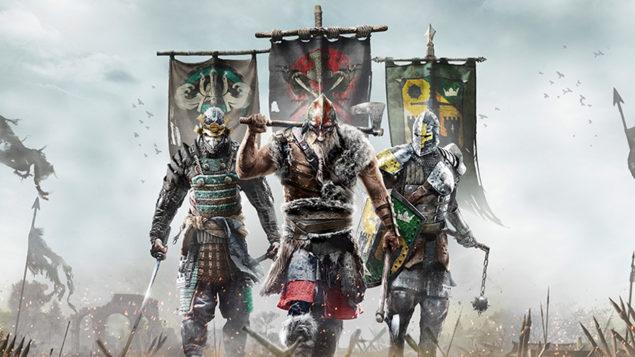 For Honor Allows Players to Fight as a Knight, Viking or Samurai - Gameplay Trailer Shows "the Art of Battle"

Creative Director Jason VandenBerghe took the stage today at Ubisoft’s showcase to talk in detail about For Honor. A four-on-four live demo showcased the objective-based swordfighting multiplayer being run on Sony’s PlayStation 4. The goal of each time was to move toward a central object with a huge army of in-game AI units. The gameplay footage was quite bloody, with gruesome executions putting end each fight. According to Ubisoft itself:

“For Honor puts a blade in your hand like no game ever has before and sets you loose in a medieval battle. This is a game for everyone who grew up dreaming of knights and epic melee battles. Step into the boots of some of history’s fiercest combatants – the loyal Knights (the Legions), the fierce Vikings (the Warborn) and the brutally efficient Samurai (the Chosen).”

For Honor emphasizes on sword combat and allows the players to control their swords with the right stick and move the character with the left stick. Ubisoft says that the upcoming game comes with a completely new way to play fighting game. Here’s some official description explaining the combat system of the game:

“Using the new Art of Battle system, you will have full control over the placement of their weapons. You can attack and move around just like you normally would, and then you can also lock onto a single opponent and enter into a dueling mode. The second you lock onto a target, your right stick goes from controlling your camera to controlling your stance. If you flick to the right with your stick, you move to hold your sword or shield on the right side.”

For Honor will be coming to PC, PlayStation 4 and Xbox One next year.