What good is E3 without the presence of a Call of Duty title? This year’s most anticipated first-person shooter from Activision is a sequel to the ninth main installment in veteran Call of Duty video game franchise, unlike previous games in the series, the upcoming game will have timed-exclusive content released first on PlayStation 4, Sony announced at its E3 2015 press conference today. Check out this multiplayer gameplay trailer for Call of Duty: Black Ops 3 that Treyarch showcased today for yourselves and see how "deepest, and most Engaging Call of Duty ever created" is shaping up. 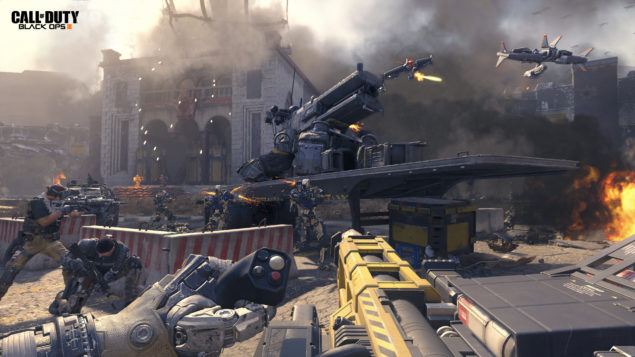 Following a number of leaks and teases a couple of months ago, Activision finally announced the next title in the highest grossing first-person shooter veteran video game franchise known as Call of Duty with a reveal trailer. The upcoming twelfth main installment in the series is named Call of Duty: Black Ops 3, and it marks the continuation of the sub-series of the Call of Duty franchise known as Black Ops. Activision and the developer Treyarch have already released a lot of details about the title, including a release date, but it is now that we are seeing Call of Duty: Black Ops 3 in full action at Sony's E3 press conference.

Call of Duty: Black Ops 3 takes players in a dystopian future forty years after the events of Call of Duty: Black Ops 2. Set in highly advanced futuristic world of 2065 where the advancements in science and technology have pushed humans to a point where they are considered to be more machine than just flesh and blood. The game, according to the developer, will stand apart from its predecessors due to the new player control system on current-gen platforms. The new Call of Duty AI plays a special role in making the upcoming game unlike any Call of Duty title. The game’s Human AI will adapt to the special abilities that players bring in based on classes. Robots are a big part of Call of Duty: Black Ops 3, and they have their own unique AI.

In the new gameplay footage, the developer showcased four player co-op filled with a lot of action. Sony's group CEO Andrew House declared that "PlayStation is the new home of Call of Duty" while announcing that  PlayStation 4 players will be able to jump into Call of Duty: Black Ops 3 exclusive multiplayer beta soon. A variety of maps and in-game features will be made available to beta players who will help in testing servers and weapon balancing. House also that additional content for the upcoming game will now be released first on PlayStation 4 as timed-exclusive.

With a full-scale blockbuster title release every year, Call of Duty can be counted as a strong iterational game. So far, it’s yet to come out with that massive technical leap that comes with a hardware shift. Call of Duty: Black Ops 3 is coming to last-gen consoles as well, so it will be interesting to see how the developer manages to offer a completely unique graphical and gameplay experience on current-gen platforms while keeping the last-gen versions on side. Call of Duty: Black Ops 3 will launch simultaneously across all platforms later this year on November 6.