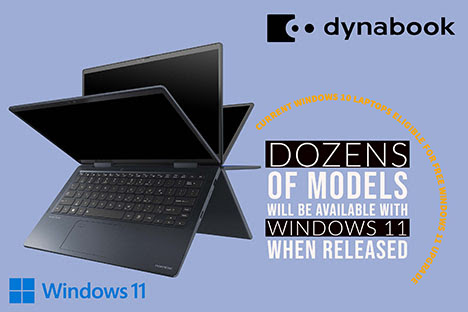 Dynabook Americas, Inc., formerly Toshiba PC Company, announced that they are planning to initiate shipping laptops with Windows 11 pre-installed in the fourth quarter of 2021. This covers their "corporate, education and channel partners."

Dynabook Americas line of laptops is the "Portégé, Tecra, Satellite Pro & Dynabook E series. As of this writing, any laptops currently being shipped are Windows 10-based, so once Windows 11 is available for companies to ship with their products, Dynabook Americas will be ready to quantify orders with Windows 11. The company does state that all of their existing orders will be eligible for free upgrades to Windows 11.

It is to note that earlier it was reported that Microsoft would be offering free upgrades to Windows 11 for anyone who currently is using Windows 10. The official date was released recently as October 5, 2021. Microsoft plans to roll out the upgrade in measured phases as Windows 10 was upon release. To see if your system is eligible for an upgrade and meets requirements, go to Settings > Windows Update > Check for updates on your Windows PC.

“Dynabook is excited about Windows 11 and ready to pair the new operating system with our world-class portfolio of business laptops. We are ready to assist. Whether your organization is looking to be a Windows 11 early adopter or choosing to stay with Windows 10, Dynabook will have the right laptops available.”

Dynabook has also stated that the company will "offer [, when the time comes,] its laptop portfolio with either Windows 11 or Windows 10. Users can customize the laptop’s processor, memory, storage, screen, security options, and operating system via their BTO program."

Dynabook Inc. is a company of the Sharp Corporation, which originally owned the Toshiba PC Company before the recent name change.