Last month our very own Rosh Kelly had a hands-on with Dying Light: Bad Blood, needless to say, he enjoyed what he played. It's understandable, the freedom of movement found within Dying Light combined with the tense action found within both the core games (particularly against more difficult opponents) and the battle royale sub-genre could make for an exciting mixture, to say the least.

Well for those of you waiting, the time has finally come. At least it has for the PC audience. Dying Light: Bad Blood has launched on Steam Early Access and is available to buy right now. Did you just say buy? Why yes, voice in my head, I did. This early access is only available for those who buy the founders pack, which costs £15.49/$19.99. This founders pack, in addition to giving you early access, comes with a number of added extras.

To be exact, the founder's pack includes:

What has been said by Techland is that the game will transition to a free-to-play model when released fully. It will then work on the in-game currency of Blood bucks. Also, for those who buy into the early access, they will also get extra content as it is patched in.

Throughout Early Access there will be free content updates appearing regularly in Drops, providing players with new items, characters, maps and more. 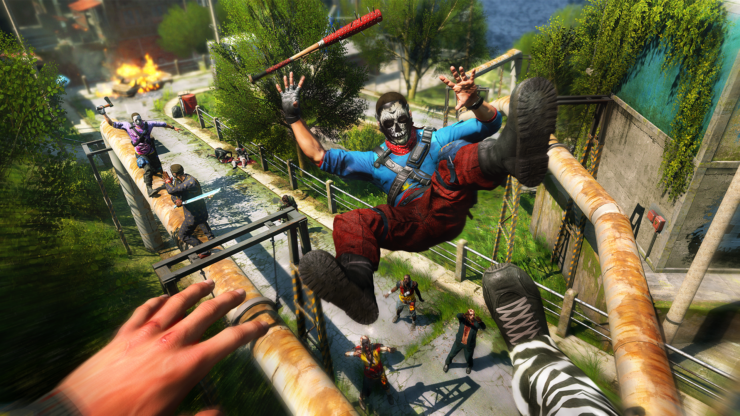 This is the whole premise of Dying Light: Bad Blood. "12 go in. 1 comes out." It indicates clearly one of the core differences between this and the many other battle royale style games out there: there are 12 players per match. This reduces the need for a larger player base and, from what has been said, the game more than makes up for it with the mixture of both PVE and PVP gameplay.

The twist here is that the key objective isn't to kill the other twelve, it's to be the first to collect blood samples from the affected. Once you've collected these, you'll radio for evacuation. The problem then is that only one person can be evacuated on the chopper. It's a race for survival against 11 other players, using your wits and the fast-pace parkour-style movement of Dying Light to keep yourself alive, collect the samples and beat the rest to the chopper.

There is no full release date for Dying Light: Bad Blood as of now, but when it's released it will be out on the PC, PS4 and Xbox One. One issue is that Techland has entered a very busy market. Fortnite and PlayerUnknown's Battlegrounds currently rule the roost, but games like Call of Duty, Battlefield, and more, are looking to jump on the Battle Royale bandwagon. Maybe the smaller game size and unique features of Bad Blood will help set it apart. I'll certainly be giving this a go.