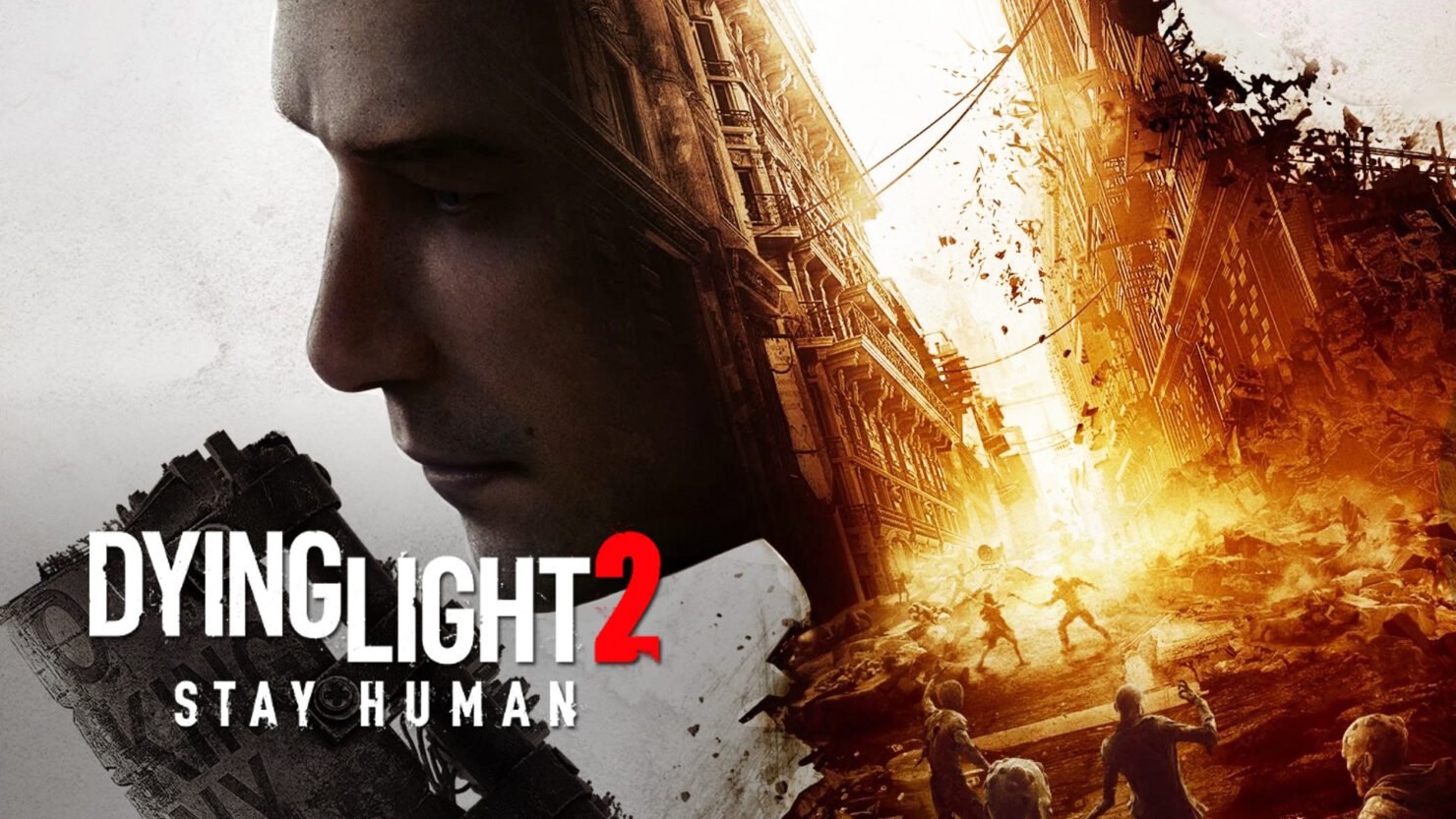 Like most big open-world games, Dying Light 2 Stay Human had its share of hiccups at launch, but overall the game is a major success, selling over 5 million copies to date. Developer Techland has been steadily ironing out issues since launch (the game’s most recent update just dropped yesterday) and has boldly promised at least a full five years of post-launch support. That would seem to be a great indication of Techland’s confidence in their new adventure, but what exactly will that new content look like?

With Dying Light 2’s early launch period now largely behind us, it’s time to start looking to the road ahead. I recently had the opportunity to grill Dying Light 2 lead designer Tymon Smektała about the game’s upcoming story DLC, and the potential for new modes of play, factions, drivable vehicles, weapon repairs, and more. He hints at a lot of interesting stuff, so jump into the interview, below. 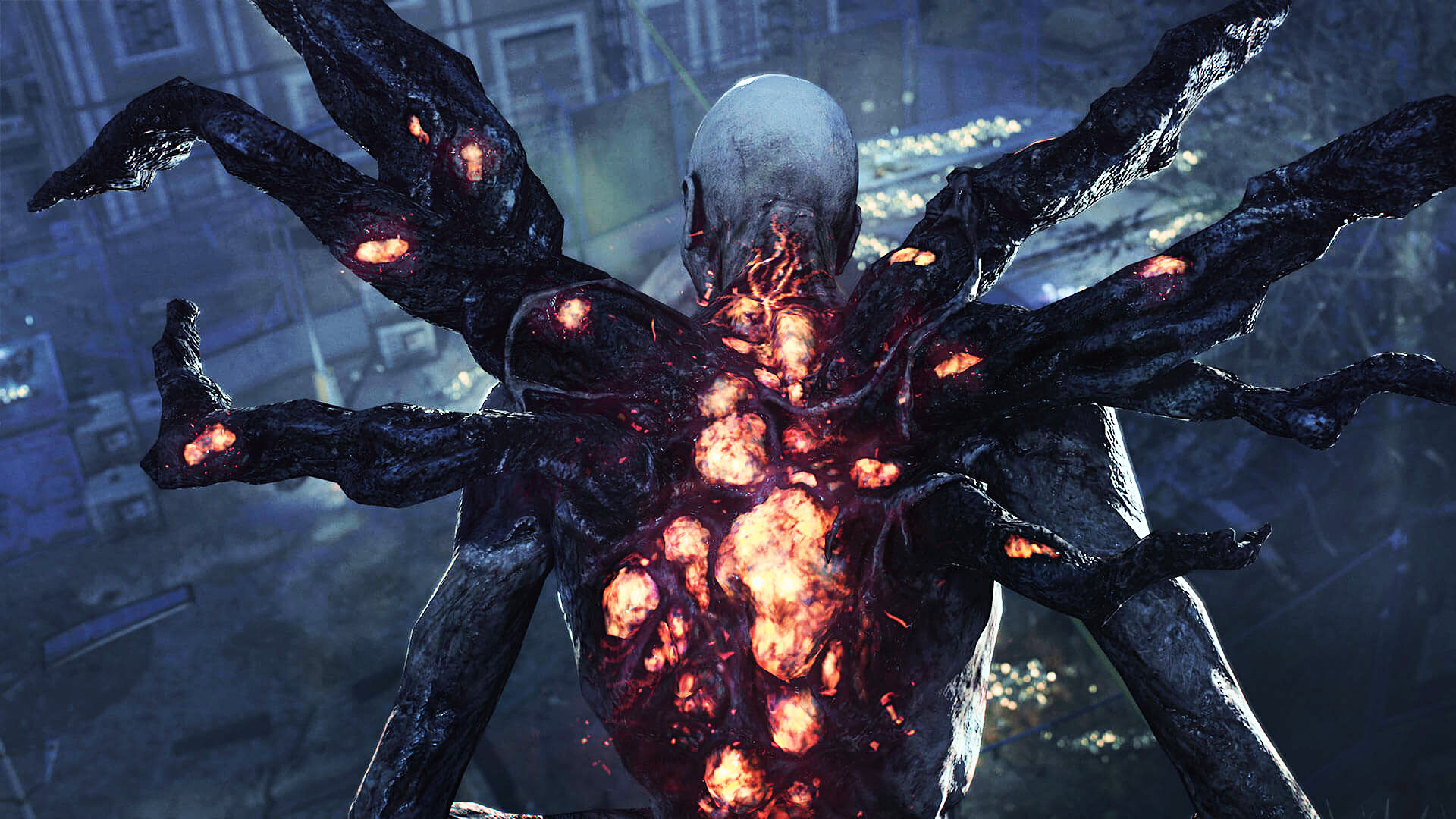 I feel like the Dying Light fanbase is one of the more underrecognized in gaming. How has Techland managed to build such strong brand loyalty? Why do you think you were successful in getting the community to jump to the new game, with over 5 million copies sold already?

First of all, I need to say that all of this wouldn’t have been possible without the great community that supports both Dying Light as a franchise and us as a developer. Since the release of the original game, we’ve treated our gamers as the most important thing we have and we do that because of all the love and good words we received back then. It was the gamers that got into Dying Light quicker than the media, and this is just our way of giving that love back. Before the sequel, we tried to analyze every meaningful feedback sent to us through Reddit, forums, Steam reviews, etc. hoping that we could identify the biggest needs of the community. We still do that while planning the post-launch content, so if you have anything to say about the game, please don’t be shy about it. Reach out to us and make sure we hear your voice.

Dying Light 2 Stay Human had a lengthy development cycle, marked by some well-publicized delays and changes in direction. What were some of the biggest challenges you faced along the way? Are there any lessons you learned that you’ll be taking forward with you?

It’s always a little funny when I get that question since, internally, we don’t have a feeling that we went through any drastic transitions or transformations. Right after Dying Light: The Following and Dying Light: Bad Blood, when we started to focus more seriously on the sequel, we created a short, half-hour movie, where we tried to present our vision for Dying Light 2 using assets from the previous game. We used it to explain the core ideas of the game to the team internally, as well as some of our partners. I rewatched that movie a few weeks before the release and you could feel it’s the same game years later. Of course, details changed and the quality of graphics got significantly better, but the feeling, the essence, the DNA was very close between that concept video and the released version of the game. 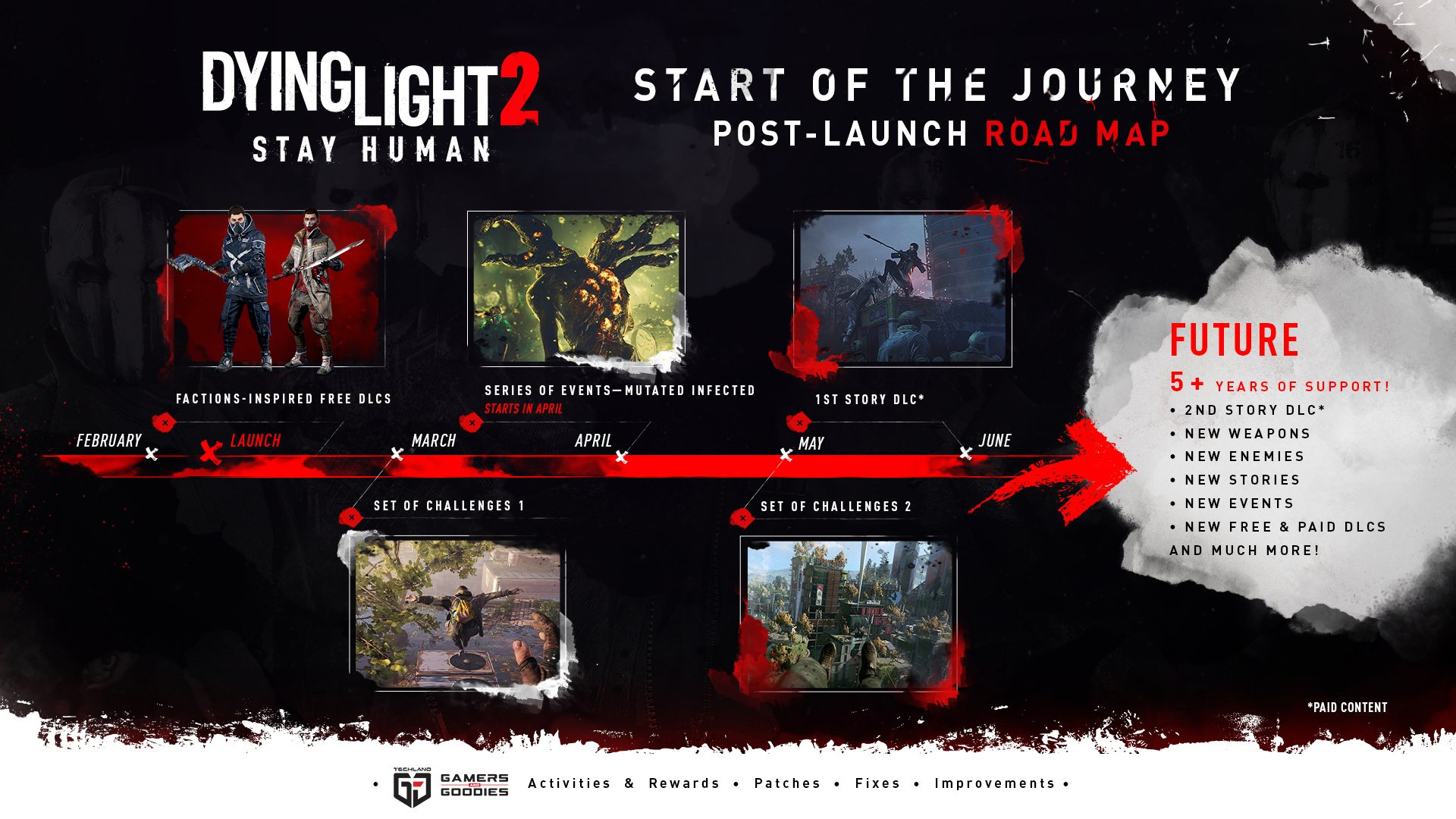 Looking ahead, you’ve promised two story expansions, the first of which arrives in the coming months. Can you share any details on what to expect from that?

What I can say right now is that the first one runs parallel to the main story, so it can be started right after Aiden arrives in The City. Since it’s the first one out the gate, we didn’t want to force players to finish the game before they’d be able to have fun with it. I went through some of the speculations our community has expressed online, but I haven’t seen any of those theories get it right. So I hope that we’ll positively surprise people with this DLC.

Will the story DLC tie into the overall branching narrative? Will you be able to make choices that affect events outside of the DLC’s story?

Its story is centered around a specific place outside of the Villedor city limits. But of course, there will be some choices to make!

Some of the updates for the original Dying Light ventured into new genres and styles of play (the Hellraid DLC comes to mind). Is there anything similar planned for Dying Light 2 Stay Human? I recall you mentioned something about a survival mode during one of the Dying 2 Know shows.

We’ve promised 5 years of support so I expect a lot will happen in the universe of the game. I don’t want to go into specifics as of now, but the first year or two of post-launch content is us experimenting with different ideas, different models, and different types of content. We want to do it like this to see what our community wants and what they hit it off with.

What about co-op? Could we see more content specifically focused on co-op? Or maybe PvP?

Absolutely. Some of the content updates that we’ll introduce this year and next year will be centered mostly on various types of online experiences. We definitely feel that there’s a lot we could do with Dying Light multiplayer, from adding more co-op mechanics to lots of different, fun gameplay modes. 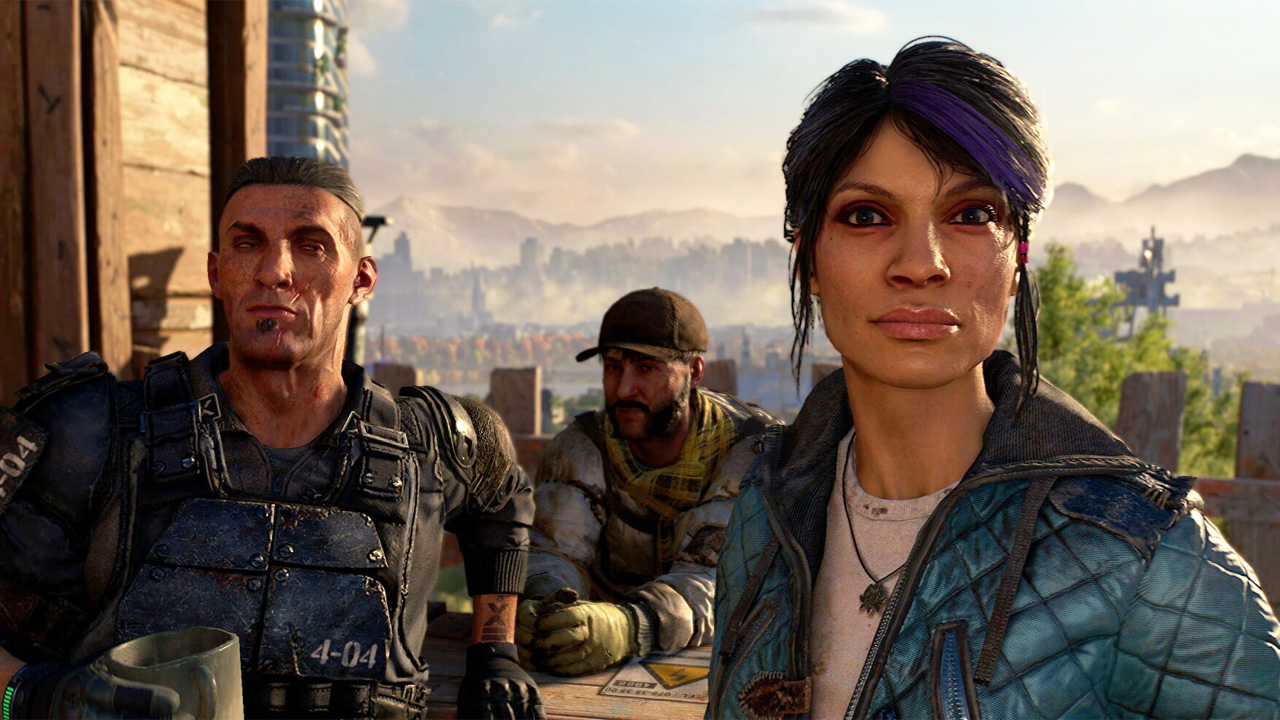 Are there plans to expand the factions system? Could, say, the Renegades become a full-on third faction?

We don’t want to do that with the Renegades, but the factions in general are a very interesting and very scalable system. So who knows…

Probably the biggest real gamechanger in Dying Light 2 Stay Human is the paraglider, in that it totally alters how you play and the way the world is designed. Does Techland have any ideas for other seemingly small, yet disruptive additions to the Dying Light formula?

If you look at our easter eggs you’ll see some signs of it already—the bicycle, the flying broom, the Doom level. We understand that players want a serious, frightening Dying Light experience first… and then they want to demolish it with the craziest ideas and mechanics possible. I hope we’ll make fans of the game happy over the whole period of post-launch support!

Speaking of the world, you mentioned the first story DLC takes place in a new location. Could some of the areas we saw in early previews that ultimately got cut make a return?

It’s not that easy and it’s not really the way to approach game production. Some people don’t understand that when they find remnants of something in the game it doesn’t necessarily mean it’s cut content. Usually, it’s just that -- remnants of old prototypes, most often from the pre-production or early production stages, traces of past work that we either missed during clean-ups or left in the game for other reasons. Bringing them back costs more than creating something from scratch, even if the community creates these urban myths about them. New DLCs and other content will definitely bring new areas for gamers to have fun with, but these will be created from scratch or will use the early prototypes more as an inspiration than actual resource.

Could drivable vehicles return at some point? Aside from that bike, of course… 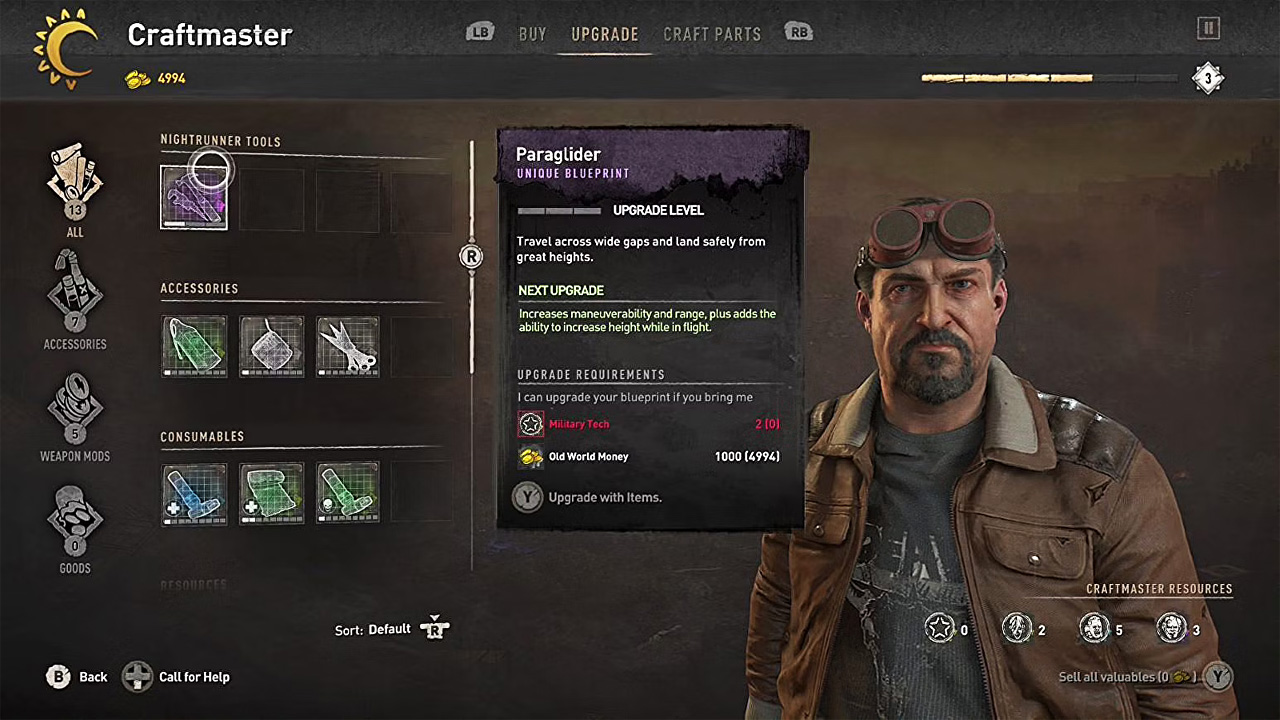 This one’s more a request than a question, but will you let us repair weapons again? Pleeease?

It’s funny since the actual life of a weapon -- the number of successful hits you can perform with it -- it’s roughly the same in Dying Light 1 and Dying Light 2 Stay Human. The only thing we did was remove the hassle of paying for their maintenance, though probably we underestimated the psychological implications of the previous system. It’s a big topic between the game’s designers as the majority of the open world loop in Dying Light is based on that survival aspect of dwindling resources and the player’s need to keep searching for a new arsenal. So will we allow for weapon repair? I can’t promise that. What I can say is we’ll have some updates to the system which will hopefully make the whole thing more interesting.

Dying Light 2 already supports DLSS and FSR, so are there any plans to implement Intel's XeSS upscaling technology?

I can’t comment on the topic right now, but rest assured that Intel is one of our closest development partners and the cooperation so far has been amazing for us.

I played Dying Light 2 on PS5. I was wondering if some PC features and options might eventually make it over to Xbox and PlayStation. I’d love to see a FOV slider, for instance.

That’s definitely the plan; we just didn’t want to make things more complicated than necessary for the initial release. Since a FOV slider on next-gen consoles was one of the most requested features from our community at launch, we’re adding it with the newest patch.

Note: This interview was conducted before a FOV slider for next-gen consoles was officially announced. Thanks, Techland! 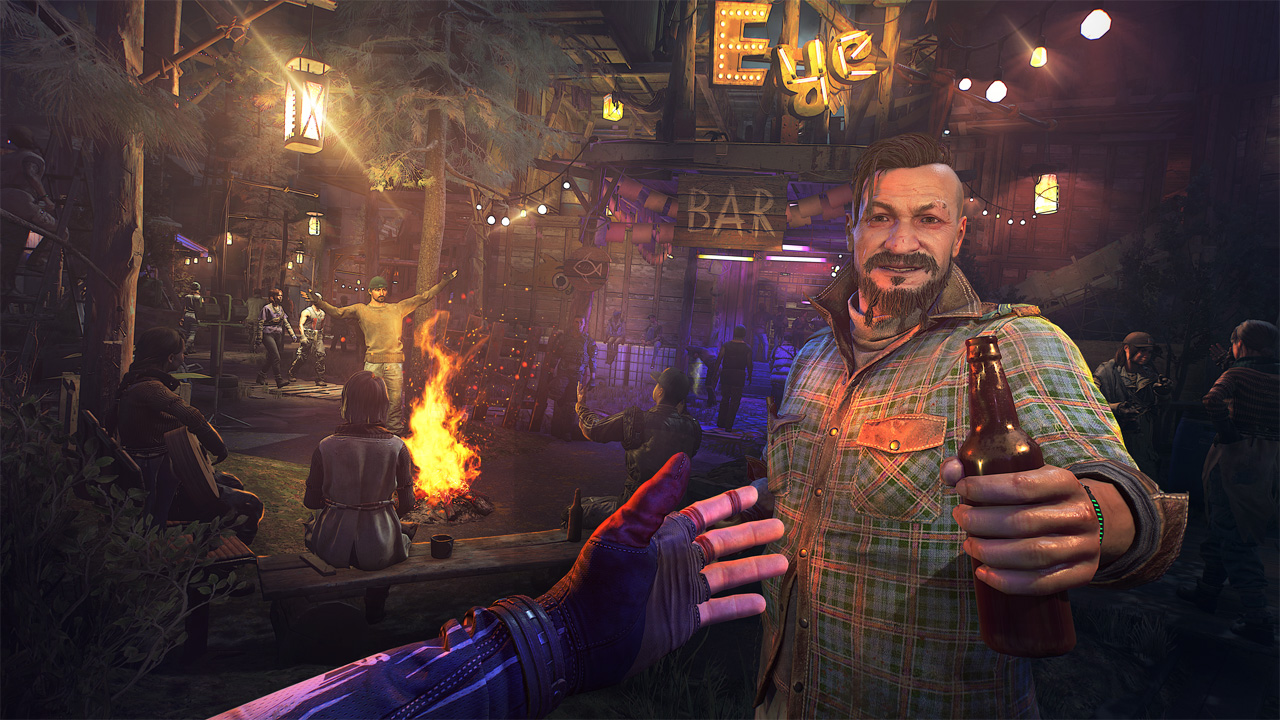 You’ve promised 5 years of support for Dying Light 2, which is obviously great for the community, but it’s also a long time for developers! Do you plan to add anything else to your plates in that time?

As a company, we have announced that we’re working on another game -- a AAA open world in a fantasy setting. It’s being built by our Warsaw team, without any rush -- building a completely new IP brick by brick. It has the potential to be an amazing game and I’m keeping my fingers crossed for it. Actually, I’d love to work on it. 5 years is a long time, so I think players can expect even more surprises from us… But no matter what happens, Dying Light will be our beloved baby. It’s a game where you can dropkick a Biter off a rooftop!  How can you not love that little brat?