Dreams Full Release Date May Have Leaked, and It’s Sooner Than You Might Think

Sony and Media Molecule’s 3D game maker Dreams has been in early access since April of this year, and thus far, there’s been no real hint about when a full release may arrive. Media Molecule seems pretty happy about how early access has been going, so could the game end up lingering there for a long time to come? Perhaps not – the game's final release date has seemingly been leaked, and we may not have to wait much longer for the full version of the game.

UK retailer ShopTo recently tweeted that Dreams is due for a February release date and budget price point. They quickly deleted the tweet, but, of course, the Internet never forgets. 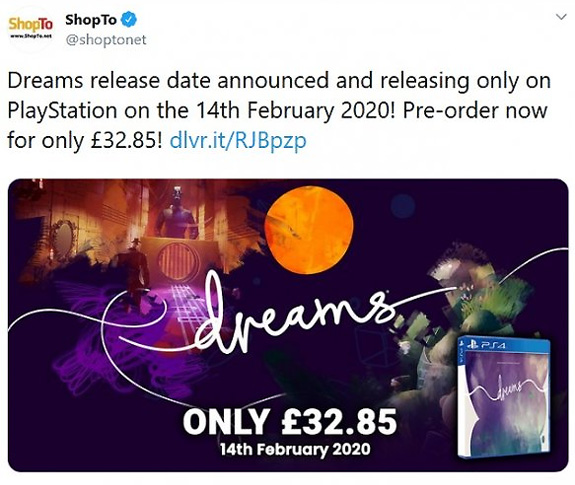 Dreams release date announced for and releasing only on PlayStation on the 14th February 2020! Pre-order now for only £32.85!

If we assume this is the real deal, it looks like Sony is essentially giving The Last of Us Part II’s old release date to Dreams. TLOU2 was originally supposed to come out February 21 before being delayed to May, so Dreams coming out on February 14 fills a gap on the calendar nicely. Of course, maybe the plan was to release Dreams and TLOU2 within a week of each other all along…but I highly doubt it.

Those playing the early access version of Dreams already have access to the game’s full creative suite, but the final version of the game will have a campaign as well as more tutorials and guidance for those looking to get into 3D game creation. Media Molecule have big plans for Dreams, as they’ve said they’d like to bring the engine to PC and allow people to publish the games they make on multiple platforms, but for now, leaving early access is the next big step for the game.

Anybody out there already tinkering with Dreams? Do you plan to jump in once the full version is released?