Today, Capcom proudly announced that its Free to Play MMORPG Dragon's Dogma Online was already downloaded over a million times, even though it's been only ten days since the service started in Japan; it also exceeded 100K simultaneous links. 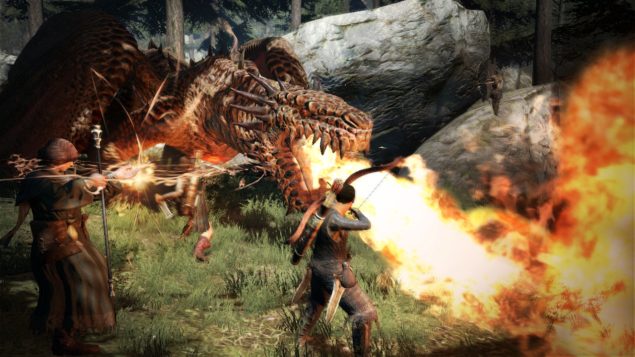 "Dragon's Dogma" is an action role-playing game in which players enjoy various adventures in an expansive open world setting. The fantasy world of this game includes swords, magical powers and many other elements. The main character, which is the player, had his heart taken away by a dragon. The player then embarks on a journey to eliminate the dragon, but must solve a number of mysteries along the way. The game has become very successful by combining spectacular action with the characteristics of a social game, in which players can borrow and loan pawns with friends through online interaction. Since the launch of the first title in 2012, as a home video game, the "Dragon's Dogma" franchise has become one of Capcom's successful series. Cumulative sales were more than 2.3 million units at the end of June 2015.

Capcom is marketing "Dragon's Dogma Online" as a title that allows people to use Internet connections for passing on adventure stories to others forever. This new title incorporates the intricate worldview, spectacular action and other characteristics that have made the series successful. Moreover, "Dragon's Dogma Online" is an online open world action game that allows players to enjoy online multiplay. Communicating with friends makes it possible to use even more complex strategies. Furthermore, the title has a high degree of freedom so that individuals can enjoy this game alone. In addition to surpassing one million downloads, this title has become one of the very few online games in Japan to exceed 100,000 simultaneous links. These accomplishments give "Dragon's Dogma Online" a strong start to becoming one of Capcom's new core titles in its online business.

Capcom will actively conduct a series of campaigns in Japan and overseas to boost user numbers. Plans also call for increasing collaboration with "Capcom Bar", produced by Pasela Resorts. Capcom will also monitor trends with an eye on introducing the game to Asian markets.

Capcom remains firmly committed to satisfying the expectations of all users by making the most of its industry-leading game development capabilities in order to create high-quality gameplay experiences also for the growing market for online games.

Dragon's Dogma Online has been developed for PC, PlayStation 4 and PlayStation 3, and all of these versions share a single world via cross-play. The game is similar to Guild Wars, in that you can either play alone with AI (pawns) or with up to eight players in the whole party; you'll meet many other players while idling in towns.