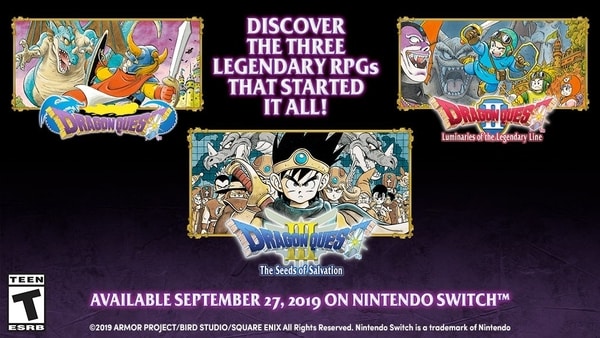 The first three entries in the Dragon Quest series are releasing in North America and Europe later this month on Nintendo Switch, Square Enix confirmed.

Dragon Quest I, II and III will be available for purchase separately on the Switch eShop from September 27th for $4.99, $6.49, and $12.49 respectively. The three games will sport some graphical enhancements and the same gameplay experience seen in the original release.

The first three entries in the popular JRPG series are also known as the Erdrick trilogy and introduce some of the staples that will come back in later entries in the series.

The iconic Erdrick trilogy begins in the acclaimed Dragon Quest where players begin their voyage as the “Hero,” a descendant of the valiant hero Erdrick in an epic journey through the historic realm of Alefgard. Dragon Quest II: Luminaries of the Legendary Line takes place a century later, where the young prince of Midenhall embarks on a journey to find the other two descendants of Erdrick in order to defeat the nefarious Hargon. The third and final title in the Erdrick trilogy, Dragon Quest III: The Seeds of Salvation, takes players through the land of Aliahan, where a young hero has been charged with an impossible task of slaying Baramos, the master of darkness.

September 27th is also the day Dragon Quest XI S releases worldwide on Nintendo Switch. The new version of the latest entry in the series comes with an improved soundtrack, new content and the 2D mode that will allow players to enjoy the game as if it were a classic entry in the series.

Dragon Quest I, II and III launch on September 27th on Nintendo Switch in North America and Europe.