Apple has just released iOS 7.0.6 (Build number: 11B651) for all the new iOS devices. You can get this latest for iPhone, iPad, and iPod touch from OTA and direct download links shared below.

The update seems quite hefty with more than 30 MBs of size on iPhone. As shared on the release note, iOS 7.0.6 includes a security update fixing SSL connection verification.

This security update provides a fix for SSL connection verification. 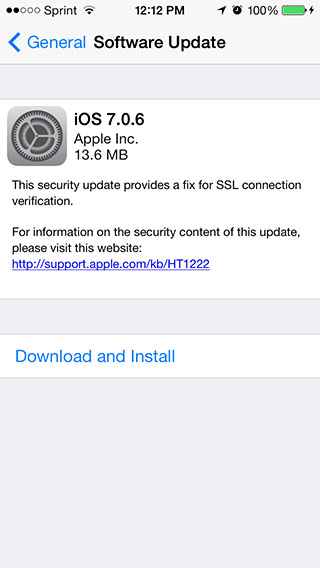 Impact: An attacker with a privileged network position may capture or modify data in sessions protected by SSL/TLS

Description: Secure Transport failed to validate the authenticity of the connection. This issue was addressed by restoring missing validation steps.

This update has come as a surprise for many as Apple's next iOS 7.1 is expected to be released in a time of a couple weeks. While iOS 7.1 will be launching packed with major performance enhancements, introducing iOS in the Car, and general bug fixes, this update is here to fix the security issue. The flaw in SSL connection could let an attacker with  privileged network position to capture or modify data in sessions protected by SSL/TLS.

For those who have jailbroken their devices, it is saner to wait for evad3rs official update on this before updating to this latest iOS 7.0.6.

[Update x1]: It is advised to stay away from iOS 7.0.6 until evad3rs team doesn't officially announce it jailbreak safe, as this update seems to be critical:

@MuscleNerd: Same advice as last time! Stay away from 7.0.6 if jailbroken, and we'll update evasi0n7 if possible (this sounds like an important fix!)