As we go beyond the latest iOS 7.1 Beta 5 release for developers, there is a rumor going about Apple finally being ready to publicly launch iOS 7.1. Apple has released both the iOS 7.0.5 and iOS 7.1 beta 5 in the past week. While earlier reports claimed Apple making iOS 7.1 release date as March, it seems to be closer than that.

Apple may release the upcoming iOS 7.1 for public in coming weeks, reports BGR. While the same publication had earlier reported March being the official release time, seems like beta launches are finally over after the 5th build was launched earlier this week.

We have learned that Apple will most likely not release another iOS 7.1 beta for download, meaning that the public release of the software should be available sometime in the coming weeks. One of our sources pegs the release happening in early March, though that does seem far away for us. We expect a gold master build to be available before iOS 7.1 makes it way into general customers’ hands, though there is currently no hard date for that.

The latest Beta 5 release did include some tiny little new features and small tweaks here and there. While it may not be that big, iOS 7.1 is surely expected to include some new functionality. 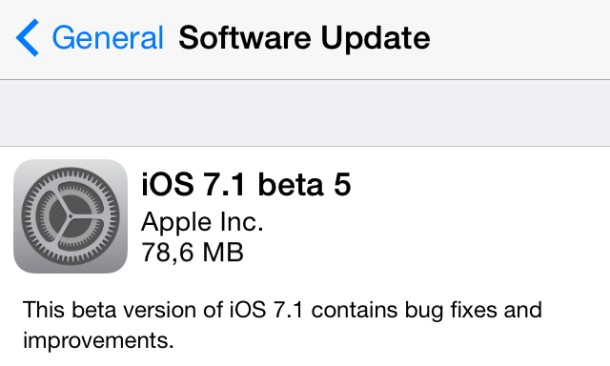 It should be noted that iOS 7.1 will be an incremental release, hence the wow factor of iOS 7 is certainly not expected. The more interesting and looked-forward to bit is for the jailbreaking community. It is yet to be seen if Apple successfully patches up the security exploits used by team evad3rs in the next public release of iOS 7.1!

iOS 7 Crash on iPhone / iPad and iPod Touch – What to Do?