Yes Arkham City released a couple of months ago but Rocksteady has decided to reward its fans now and give the ones who yet to finish the game or want to replay the game a free DLC surprise, while most of the DLC is from pre-order (Except Catwoman) they have given fans a specific Batman costume for free and its redeemable via the XBOX LIVE Marketplace, the PlayStation Network Store and Games for Windows Live Marketplace but without entering a special cheat code in the form of a series of directions you will only have half the DLC. 😀 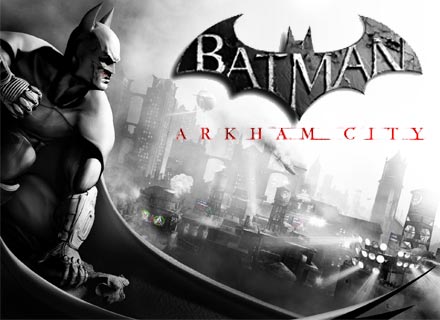 While the game has been out for more than a while now on the consoles and suffered a month-ish delay on the PC version Rocksteady has decided to award their fans by giving them a free DLC costume redeemable from your nearby marketplace no matter what the platform. This is really great and all but couldn't they have announced this sooner so that people who were still playing the game could have taken advantage of this? Although if you are looking to beat the game again on New Game+ This DLC costume would give a great excuse to do so 😀 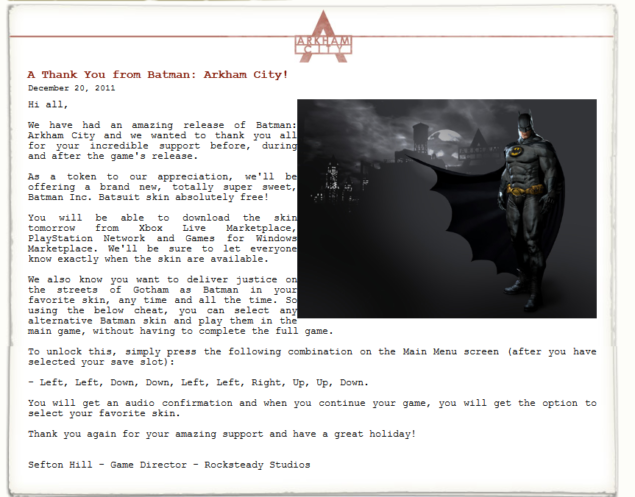 You will hear an audio confirmation and will then be able to redeem your new costume, the costume can be applied at any time even DURING a play through so you don't need to start a new game or beat the game to be able to use the costume.

Here is a full statement from the people at Rocksteady

We have had an amazing release of Batman: Arkham City and we wanted to thank you all for your incredible support before, during and after the game's release.

You will be able to download the skin tomorrow from Xbox Live Marketplace, PlayStation Network and Games for Windows Marketplace. We'll be sure to let everyone know exactly when the skin are available.

We also know you want to deliver justice on the streets of Gotham as Batman in your favorite skin, any time and all the time. So using the below cheat, you can select any alternative Batman skin and play them in the main game, without having to complete the full game.

To unlock this, simply press the following combination on the Main Menu screen (after you have selected your save slot):

You will get an audio confirmation and when you continue your game, you will get the option to select your favorite skin.

Thank you again for your amazing support and have a great holiday!