Evasion7 1.0.3 is now released to fix Retina iPad Mini reboot loop issues that were affecting many users. As shared with you earlier, iOS 7.1 Beta 3 that was seeded to developers by Apple did not fix the exploits used by Evasion7 by the evad3rs team. Hence, only a patch up was required to jailbreak updated iOS 7.1 beta 3 powered iOS devices.

Evas3rs have now released a new version to jailbreak iOS 7.1 beta 3 and also fix the boot loop issues that had been faced by many Retina iPad Mini users. Evasi0n7 1.0.3 is compatible with these iOS 7 devices: 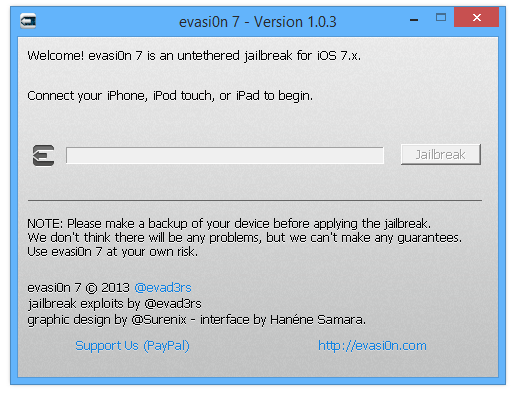 Pod2g confirmed that if you have already jailbroken your iOS  7 device, you need to re-jailbreak it.

People already running evasi0n7 1.0.2 on their devices do not have to update. evasi0n.com software updates are for new installs.

if we need to update the evasi0n untether in the future, it will be available in Cydia.