As the release date of Destiny, which is one of the most anticipated upcoming video games, is closing in, Bungie, the developer of the game, is working to wrap things up by pushing the game into Beta testing and eliminating final bugs and glitches that will be reported by Beta testers. Expected to launch on September 9, 2014 for all major video game consoles except Nintendo Wii U, the game will enter its Beta stage in about a week, but you can download the Destiny Beta on your PlayStation 4 console right now, following the method given below. 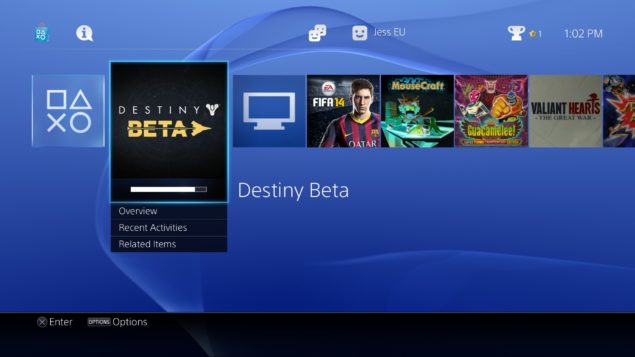 This is How to Pre-Load Destiny Beta on PlayStation 4 Right Now; Requires 14.3GB HDD Space

Bungie's upcoming always online action role-playing first-person shooter is about to enter its Beta testing stage soon. Bungie first launched the Alpha version of the game that ran from June 12 to 16 exclusively for PlayStation 4 players, and according to the reports, more than 6 million games were played during the Alpha test period. Now, Destiny Beta will launch first on the PlayStation 4 and PlayStation 3 consoles and players will be able to enjoy it starting from 1 p.m. EST July 17, and at the same time on July 23, the Xbox One and Xbox 360 users will also gain access to Destiny Beta. The Beta will end on July 28 on all platforms.

The Destiny Beta is still less than a week away from launching on the PlayStation consoles but it seems like some lucky players are already able to pre-load it on their PlayStation 4 consoles. Apparently, Destiny Beta can only be pre-loaded right now by those who pre-ordered digital version of the game on PSN. According to details revealed by those who received the pre-load, "download queue needs to be active".

According to the Destiny Beta download screenshots given below, the initial build download of Destiny Beta is 179MB in size, the second download is 13.2GB in size, and after un-packaging, the total space that will be covered on your HDD is 14.3GB. Comparing this size with the size of Destiny Beta on Xbox One, it is 12.63GB.

If you own a PlayStation 4 and want to pre-load Destiny Beta right now, then this guide might help you. Thanks to PS4Daily, now we know how to pre-load Beta version of the game in regions other than Europe. During the process, you will need to pre-order the game from European PlayStation Network, but don't worry, if you don’t want to pre-order the game through the European PlayStation Network, there is also a guide on how to cancel this pre-order.

How to cancel the pre-order:

If you have completed each step given above correctly, you should be able to download Destiny Beta and play it once it goes live on July 17th on the PlayStation consoles. Note: you can still play with your main account even though you downloaded the client from a different region.

Head to the gallery below for a picture guide.