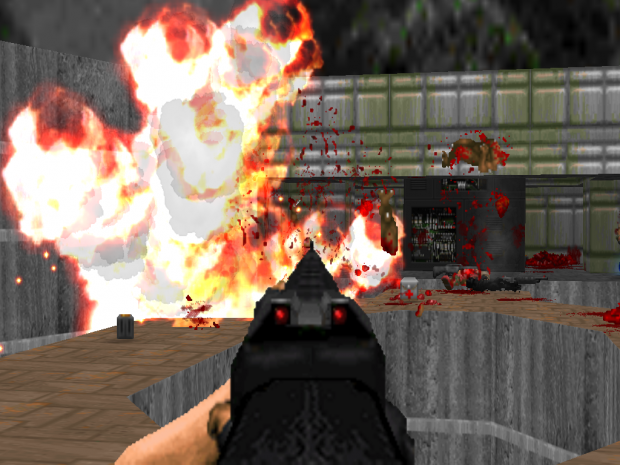 History of Doom - The FPS That Started It All

Briefly after the stroke of midnight on December 10th, 1993, id Software's Jay Wilbur uploaded Doom to the University of Wisconsin's FTP server. Since id Software likely didn't have the technical means to distribute the Doom shareware package themselves, they had to rely on the state-of-the-art network infrastructure that the University of Wisconsin (so generously) had to offer. To the dismay of id Software and the university administration, the sheer number of users trying to access the game took their network offline.

The world (at this time) had almost never seen such a high demand for digital content before, let alone a game. Had you told id Software at the time that their game (or even some variant of it) would still be living on amongst other brand-new titles in the year 2013, they would have laughed in your face. Even with the high critical acclaim at the time, nobody could have predicted that. Not even Doom's biggest die-hard fanatics.

One such deciding factor of Doom's longevity was mod support. During the development of Doom, the development team got a bright idea: instead of following the traditional corporate route and locking their game up, they did the opposite. Not only did they make it easily moddable; but they provided the community with the tools to do it. As gamers, we should appreciate this decision as it likely redefined the future of modding. Before the release and massive success of Doom and its mods, game publishers (for the most part) weren't too happy with the idea of people tinkering with their intellectual property.

The reaction to Doom's mod support from the gaming community likely turned a lot of corporate heads and changed a lot of corporate minds. Not to say Doom wouldn't have been any good without mod support, but with it Doom remains an unstoppable force. Especially after id Software officially opened the source code to the world in 1997. Doom's compatibility with mods and its open-source nature brings me to my next topic, one of the best Doom mods I have ever played: Brutal Doom.

One of the great things about having a game or piece of software opened up is that it gives the community a chance to tweak and update things that need it, even in the case of the original parent company abandoning the project. This was definitely true in the case of Brutal Doom. Although id Software didn't necessarily "abandon" it, patches and updates decreased in frequency pretty quickly after the release of Doom II (as do they with most other games as well, developers have other projects to move to). Had Doom been developed continually by its original creators, the end product would be very similar to what Brutal Doom offers. More enemies, more gore, modern graphical effects, companions, over-the-top taunt kills, and a hilariously Nukem-esque main character. Had id Software not made that fateful decision, today we wouldn't only be devoid of Brutal Doom and other excellent mods like it, but the industry would likely be much more hostile toward mods. Modding helps everyone, which brings me to my next point: the importance of mod support.

Modding is an important freedom in today's market for both gamers and developers. It helps gamers for many reasons. For one, it allows them to fix gameplay details that they may not agree with (and share said fixes with others). Secondly, it gives them a taste of what game development is like (sometimes turning them into game developers themselves). Thirdly, it reduces player dependency on DLC to simply enjoy the games they've already paid for. Even while giving up the option to sell (some) DLC, supporting mods is also a smart choice for developers. The first argument (for developers) is profit, i.e. the sole purpose of a company's existence.

Just look at Arma II. After the release of the highly successful DayZ mod, sales of the (already old) game increase ten fold! Arma II isn't nearly the only game to see success on this scale as a result of mods. Almost any game that is given mod support will continue to sell long after release if it has a healthy mod community. In conclusion, Doom is one such game that remains a shining example of how beneficial it can be to open a game to the gaming community.