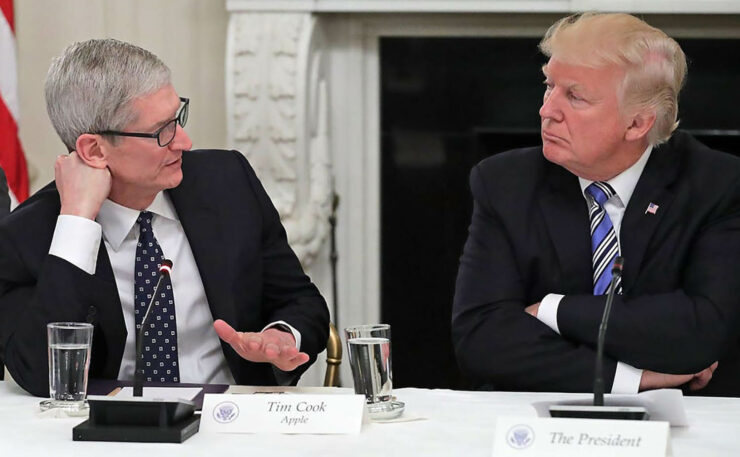 Looks like at some point, U.S. President Donald Trump may have upgraded to Apple’s latest iPhone model; one that doesn’t ship with a home button. Since the official model name hasn’t been disclosed, it could range anywhere between the iPhone X back from 2017, to the latest iPhone 11 Pro Max. According to the details, Trump isn’t too happy with Apple’s design direction of the latest models and he’s letting CEO Tim Cook know about it.

It’s possible Donald Trump may have upgraded to one of the latest iPhone 11 series. We believe this is the case because even on Apple’s website, the company is selling the iPhone 8 and iPhone 8 Plus starting from $449, so he could have bought one out of the two just to get the home button back. The aforementioned price was introduced shortly after the technology giant launched the 2019 iPhone range, comprising of the iPhone 11, iPhone 11 Pro and iPhone 11 Pro Max. In short, the 45th President of the United States isn’t pleased with Apple removing the home button and Donald Trump is letting Apple CEO Tim Cook know in the form of a tweet.

It’s possible Trump upgraded to the latest model in order to experience an additional layer of privacy as well as experience more reliability from an Apple product. Strange enough, he hasn’t commented on the removal of the headphone jack, which means that either he doesn’t listen to media with his headphones plugged in, in which case he’d carry around AirPods or Bluetooth-enabled earphones, or he hasn’t used an iPhone model that ships without a headphone jack, which would be the iPhone 7 and iPhone 7 Plus onwards.

To Tim: The Button on the IPhone was FAR better than the Swipe!

Regardless, we personally believe that the swipe gesture is more intuitive and wastes less time in getting back to the home screen or switching between apps than performing the same actions using the home button. If Donald Trump really wants to see the home button again, he should either switch to the iPhone 8, the iPhone 8 Plus or wait for Q1 2020, since that’s the rumored release timeline for the upcoming iPhone SE 2.

The model rumored to arrive next year is said to come with an affordable $399 starting price, a Touch ID-supported home button, and Apple’s A13 Bionic SoC. Do you think President Trump is right about the home button being better than swipe-based gestures? Let us know down in the comments.