Do Not Disturb Feature In iOS 6 Setup Guide

We're still getting to grips with Apple's latest iOS update. iOS 6 comes bearing some interesting new features. The Do Not Disturb feature in iOS 6 is a new addition to this superb mobile platform. Configuring it is not exactly a tough job, but some people seem to be having difficulties. This particular guide will show you how exactly you can enable the Do Not Disturb Feature in iOS 6, just through a couple of very simple steps. 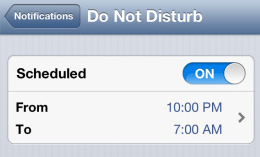 iOS 6 is a follow up update after Apple released iOS 5 last year, which was the biggest iOS platform update ever boasting well over 200 new features. iOS 6 is not that big an update, but it has a decent set of features. For example there's Facebook integration, which is no doubt a very welcome addition. Moreover there's a new Passbook app as well that allows you to manage e-tickets and vouchers straight from within the app itself. Siri comes to the iPad with iOS 6 apart from bringing much needed improvements to both Siri and the Notification Center.

Do Not Disturb is yet another major feature of iOS 6. Think of it as bedside mode, reinvented. Upon being toggled on, Do Not Disturb will automatically put your device in silent mode and will automatically stop the screen from lighting up every time an alert comes up on the device. Alerts have a tendency to keep popping up if your iPhone, iPad or iPod touch is connected to a WiFi or data connection and lighting up the screen. This can cause disturbance if you're sleeping. The Do Not Disturb feature in iOS 6 takes care of this issue.

Step 2: Locate Do Not Disturb toggle.

Step 3: Tap on the toggle to turn Do Not Disturb feature on

Step 4: Tap on Notifications and select Do Not Disturb

In the case of an emergency, you can received calls or alerts from contacts marks as favorite even with Do Not Disturb toggled on. You also have the option to allow repeated calls to come through, meaning that for example if you're called from one particular number thrice, the fourth time Do Not Disturb mode will automatically let the call come through to you. This is how you set up Do Not Disturb feature in iOS 6.