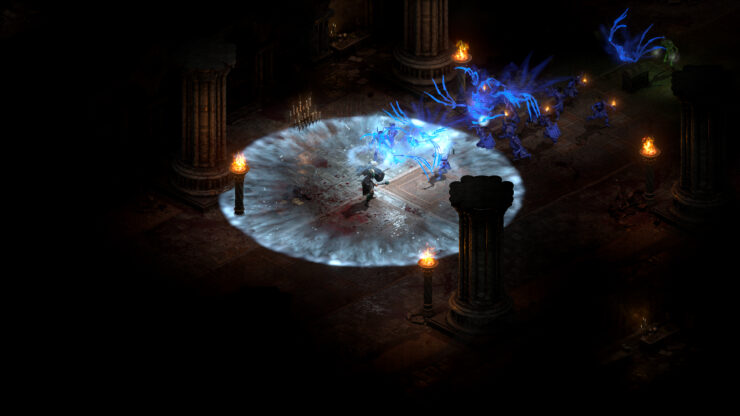 Following the Technical Alpha that took place earlier this year, Blizzard has revealed the main improvements that they're going to bring to Diablo II Resurrected thanks to the feedback gathered from the testing phase. Several visual effects have been improved, for starters, and accessibility options will be expanded across the board.

The Sorceress may use Lightning, a powerful skill which shoots a bolt of electricity from the Sorceress’ fingertips. Based on community feedback, the Lightning VFX has been enhanced with a whiter and thicker visualization that is more reminiscent to the original VFX.

The Sorceress may summon an ice storm to rain cold death onto her enemies. Like Lightning, the VFX for this spell has also been adjusted to better capture the destructive force of the original.

Using this aura, the Paladin can constantly slow and freeze enemies in near proximity. The VFX for this AoE aura has been updated to better represent the distinct wispiness and colors from the original game.

The VFX for when monsters are damaged or immobilized by spells (i.e., cold spells), poisons, or other status effects underwent a color revision based on community feedback.

From auto-gold pick up, large font modes, UI scaling (for PC players), and gamma/contrast settings to enhance readability, we’ve taken strides to equip players with customization options to suit their needs. With these options, players may tweak the visibility of their HUD and graphics, finding the ideal balance between beautiful and gritty, or whatever their preference may be. We’ll be touching on our efforts to make Diablo II Resurrected more accessible in a later, more detailed blog post.

Characters will no longer spawn in a hostile place until the game is fully loaded, preventing characters from getting attacked or harmed during a loading screen. Additionally, the overall load times will be faster.

Based on community feedback, we’ve removed extra grunts and yelps that were initially added.

Diablo II Resurrected will be available starting September 23rd for PC, PlayStation 4, PlayStation 5, Xbox One, Xbox Series S|X, and Nintendo Switch. An early access beta for pre-order customers will begin as early as next month, though.