A curious tweet was posted by the Twitter account of Detroit: Become Human, which stated the following: "When you wake up and #DetroitBecomeHuman is still a PS4 exclusive and you're still an @Xbox owner."

After its publication, the tweet was removed in less than three hours, but luckily some users managed to take the following capture. Nothing escapes the Internet, after all. 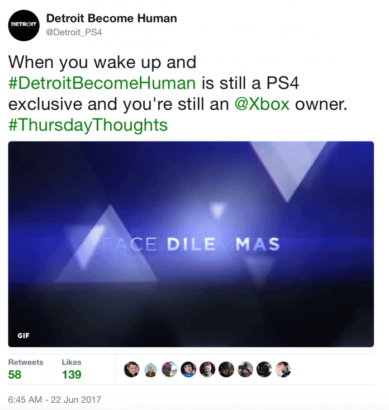 And as usual, the wrath of the Xbox players and the responses to this exposure were not particularly friendly.

The rivalry between Sony and Microsoft in the console business has existed for over a decade, but it is definitely supported mainly by the fans of the PlayStation and Xbox brands and less by the actual manufacturers themselves. In fact, Head of Xbox division Phil Spencer often frowned upon the console war.

Personally, I consider this kind of statements to be quite unfortunate as I think that the decision to purchase an Xbox One or any other console should not be taken to the mocking level.

One question, however, remains: will there be a follow-up statement by Microsoft and is it really necessary? Finally, we invite you to tell us about what is your opinion on this tweet that was published on the official Twitter account of Detroit: Become Human.

The game will launch on PlayStation 4 at some point next year.