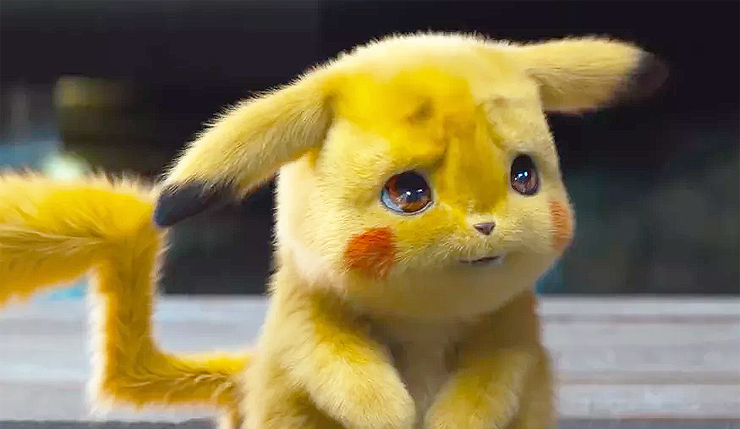 When it was announced relatively obscure Pokémon 3DS game Detective Pikachu would be getting a Hollywood live-action/animation hybrid movie starring Ryan Reynolds as the titular electric rat, most of us took the information, filed it away in a dark corner of our minds and tried not to think about it again. Just one more bewildering headline amongst the dozens we’re bombarded with every day now. Well, while most of us were trying to forget the project existed, Warner Bros. actually went off and made the damn movie, and now they’ve released a Detective Pikachu trailer. Look upon it and despair…

Shudder. Pikachu covered with realistic rodent fuzz is odd enough, but some of the supporting critters are even worse. Like, why is Jigglypuff covered in fur? Mr. Mime and his human flesh face gives Pennywise a run for his money. I mean, yes, the trailer has lots of fun nods to Pokémon trivia, and is, to some degree, intentionally off-putting, so if you think the gag is funny, more power to you. Personally, I’m…probably going to pass. Here’s your official Detective Pikachu story synopsis:

“The story begins when ace detective Harry Goodman goes mysteriously missing, prompting his 21-year-old son Tim to find out what happened. Aiding in the investigation is Harry’s former Pokémon partner, Detective Pikachu: a hilariously wise-cracking, adorable super-sleuth who is a puzzlement even to himself. Finding that they are uniquely equipped to communicate with one another, Tim and Pikachu join forces on a thrilling adventure to unravel the tangled mystery.

Chasing clues together through the neon-lit streets of Ryme City—a sprawling, modern metropolis where humans and Pokémon live side by side in a hyper-realistic live-action world—they encounter a diverse cast of Pokémon characters and uncover a shocking plot that could destroy this peaceful co-existence and threaten the whole Pokémon universe.”

Detective Pikachu scampers into theaters on May 11, 2019. Oh, and if you’re thinking about checking out the game in anticipation, we’ve got a review right here.