Gameinformer is among the few privileged enough to get sneak peeks at Naughty Dogs upcoming action / adventure title, after their success in the Uncharted trilogy the developers have decided to work on something new, their latest project is the last of us and Gameinformer March issue details some of the features of the game we can come to expect along with HD magazine scans of the game.

While we saw a peek at some screenshots earlier its still good to see more material. 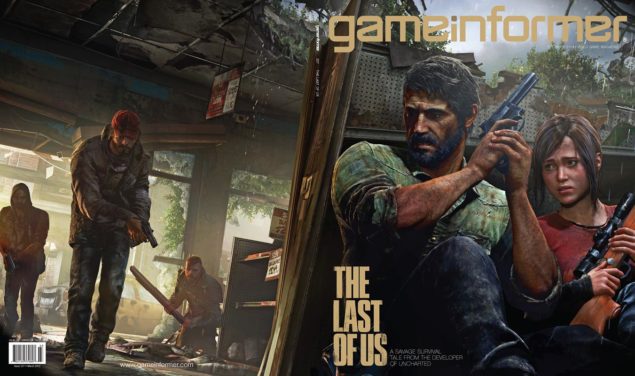 The Last of Us is a gripping story of a father and a daughter like relationship caught in a post apocalypse zombie world, while the pair have to survive against zombies they also have to watch out for other survivors who like them believe this is a time for "every man for himself" rather than "United we stand" the game has been under development for 2 years now and was premiered at last years SPIKE VGA awards but after the first trailer there has been no new game play footage and instead we have had to settle for screenshots and now magazine scans. We can always fall back on the basic saying of "A picture is worth a thousand words" right?

In the March issue of Gameinformer the game is under the spotlight: we learn about the release date, online and more into the game such as story and combat.

So far the confirmed details on the game are

The details below MAY contain spoilers to read them at your own discretion:

-First described scenario: Joel and Ellie are driving in a pick-up truck and see a road that is blocked off into a single narrow passage. Someone clutching their stomach comes running up and asks for help. Ellie asks if they're going to stop and help, but Joel says they're actually looters who want to steal their stuff, so they try to drive on past them, causing the scavengers pull out guns and start shooting at them. Joel and Ellie almost get away, but just before they do, but their truck is hit with a city bus, knocking it into a storefront. Joel and Ellie get forcefully pulled out of the truck by the scavengers and a big fight erupts, and then the description just stops. This is presumably the hobo scene we seen in the screenshots.

-The second team came about due to constant requests from both internal and external studios to license their engine. However, the engine doesn't have a toolchain or documentatin set to facilitate that, so the only way to leverage their technology on a second game was to create a second team. The other reason was that they didn't want to lose their staff to other companies because of career ceilings or burnout from working on too many Uncharted games, so creating a second team let them promote a lot more people and let them work on something new. As such, the second team was created. Unlike many other multi team developers, Naughty Dog's teams are actually completely separate, so staff doesn't move between the two projects.

-Gustavo Santaolalla is composing. He worked on Brokeback Mountain and Babel.

-The second team was originally considering making a Jak & Daxter sequel along with some other unnamed ideas. The Jak & Daxter idea was explored quite extensively, and Game Informer will have more about it on their website. However, they felt the direction they wanted to go as a company would end up making a poor Jak game, so they ultimately shelved the project. I don't want to put this in the OP since it's about The Last Of Us, so I'll link to it here.

-The game is built around the idea of expanding the Drake/Tenzin relationship into a full game concept.

-The game's plot setup: Ellie is a 14 year old orphan who lives at a bording house in a military quarantine zone and is fascinating with relics of how the world used to be (like CDs and books), and constantly gets herself in trouble. Joel is in his late 40's and smuggles guns and drugs to and from the quarantine zone. The issue with this is that the zone is guarded by military checkpoints, and if you're found to have any signs of the fungus during one of their frequent body scan, you're executed immediately. The fungus also transfers by air, but it needs a high concentration of spores in a confined space to do so, which is why you don't see everyone wearing masks. The game starts with Joel agreeing to smuggle Ellie out of the safe zone for some unknown reason, but things go wrong and the military starts chasing him. He was going to abandon Ellie, but a dying friend asked him to escort her to safety, so he does. They try hiding, it fails, and thus start fleeing West across the entire country. Their relationship is supposed to be like the ones you see in True Grit or Road to Perdition.

-Second described scenario: They describe a combat scene which makes the game seem pretty melee heavy where you're primarily fighting with things like bricks, fists, and wood planks. Bullets are very scarce, but kill enemies in one shot. The weapons you have and the events of combat also effect the behavior of the AI, which is explained in a later bullet point. Plot wise, in this scene Joel and Ellie beat the scavengers who attacked them.

-The game sounds like a hard M rating. Here a snippet of what happened during that fight: "Joel elbows his attacker and turns the tables. He slams the man down on the glass shard and he comes up sputtering with blood pouring out of his throat."

-Everyone swears constantly during combat, especially Ellie. Expect to hear "motherfuckers", "fuck", "fuck face", and other such terms as often as you do in Battlefield 3, or perhaps even more.

-The game's plot is self contained, so were this game to bomb and the franchise die, you won't have to worry about a cliff hanger ending. They didn't directly rule out sequels though, but just said that they think about one game at a time. However, earlier in the article, they refer to this as a "new IP that we're definitelyl going to be supporting".

-The AI and game dynamic is explained a bit more. They want it to be like No Country For Old Men, so a single bullet will kill, but you have very few bullets to give it a "realistic" feel to the setting. The AI also uses a "balance of power" system, where they will stay in cover and try to flank you if you have a gun, but if they see you only have a melee weapon, they will rush you and try to overwhelm you with numbers. They also react based on other events that are happening. They get angry when their friends die, they warn each other when in danger, and they get frightened when they've lost the upper hand. Also, during combat you can do things like hitting people with a heavy object such as a thrown brick, which will stun them for a bit and let you get some melee hits in with something like a wood plank. This can also happen between the two characters, with Ellie throwing the brick to let Joel move in with the plank.

-The game has health packs and it takes time to use them, so the added lethality of your weapons goes both ways. This is to encourage you to avoid direction confrontation as much as possible.

-They're focusing on Ellie's AI a lot because they want her to be part of the combat. She gives you warnings and helps you out of jams, and her combat capabilities grow over time, though they didn't say how. Game Informer points out she has a gun on the cover. They're trying to make it so she doesn't become an escort question like burden though, as they feel no one would enjoy that.

-Third described scenario: After defeating their attackers, they find their resource stash behind a garage door. Ellie asks Joel how he knew this would be a trap, and Joel mentions that he's been on both sides of this ruse before (as in, he's jumped and killed people for resources himself with this trick). Ellie asks if he's killed a lot of innocent people, and Joel tries to dodge the question. Ellie says she'll take that as a yes, and he says to take that however she wants. Joel and Ellie then start walking toward a nearby bridge, which is the entry to a quarantine zone. They see tons of cars filled with bullet holes and dead bodies inside them. Ellie asks if it was more scavengers, but Joel says it was most likely the military, because they knew they couldn't let everyone inside the quarantine zone, and by killing all these people, they would have less infected to deal with.

-There will be platforming and puzzle solving in the final game. These were not seen in the demo, but will involve the dynamic of having two characters. However, these events will be grounded in reality, so you won't get wild jumping actions like Nathan Drake does.

-You will be facing humans more frequently than infected, as humans are the focus of the game. That's why none of the infected were shown in the demo.

-The game will also have (location-type and NPC-type spoilers) suburbs and rural areas. Also, not all humans you find will be hostile. Some will actually help you.

-They assert that once again the game is about the characters and their relationship, not the whole infected thing, which is why they showed the infected up front.

Along with these details here are some HD Scans of the March Gameinformer issue showing some more scenes in the game: 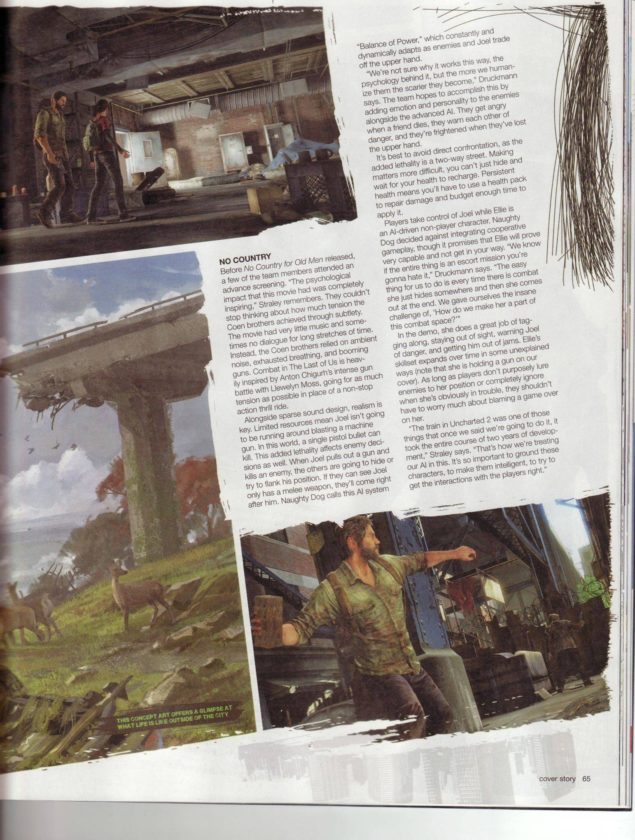 The game is going to be a HUGE change up from Uncharted, this time there will be no wild shootouts and no regenerating health. Making players more conservative and cautious about their health is a good step to make the game suit the theme its being set in and this is precisely why Naughty Dog deserves a lot of praise for this project but aside from that they are making sure that Ellie will not hinder the game for anyone, according to the developers the game will not be an escort mission as Ellie will be a smart AI and will hide out during fire fights and come out when its safe. Not to mention the game gives us more freedom to explore than Uncharted did in any of the games, you now have options to go into certain places if you want for additional exploration and the game will not be as linear as Uncharted which will really help make the experience more enjoyable.

While I am excited for a 2012 release date I am definitely awaiting more details on the game and hopefully more game play videos in the future :D.