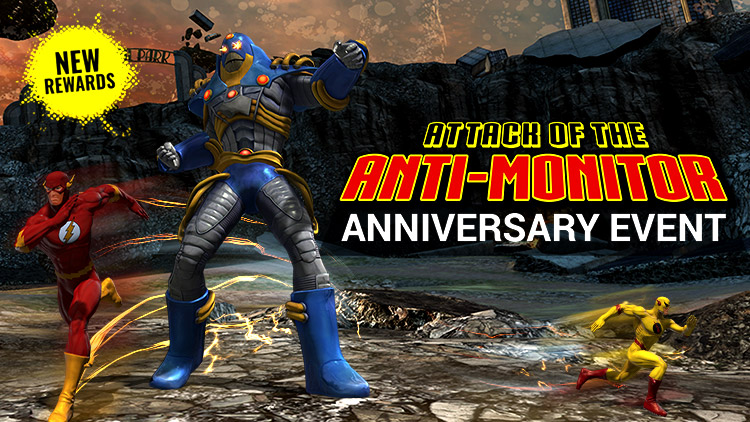 Fight against the Anti-Monitor as you time travel to the future in a twisted version of Metropolis, where the Qwardians from the antimatter universe have wreaked havoc on the City of Tomorrow. If you're familiar with the Crisis of Infinite Earths DC Comics' event, you'll know exactly what this villain is fully capable of.

The Attack of the Anti-Monitor anniversary event features:

If you want to play Centennial Collapse raid, you'll need to be a minimum of Level 10 and face off against the Anti-Monitor's forces. Your combat rating will be buffed to 230 when fighting in Qwardian Metropolis. The same goes for the new open-world missions. You can access the content by selecting the 'Monitoring the Situation' event mission in the Mission Journal.

Thanks to Booster Gold, Qwardian Time Capsules are available to earn as enemy drops during gameplay. In order to open the time capsules, you'll need a Stabilizer that you can buy from the Marketplace. The alternative is putting together Stabilizer pieces you find as drops.

The event brings a new currency, Qwardian Crowns, that lets you buy new gear inspired by the Anti-Monitor, so expect some huge armor and a lot of rounds pieces of gear.

DC Universe Online's 6th Anniversary Event is going to be active from now until January 31st. You can play the free-to-play MMORPG on PC, Xbox One, and PlayStation 4.