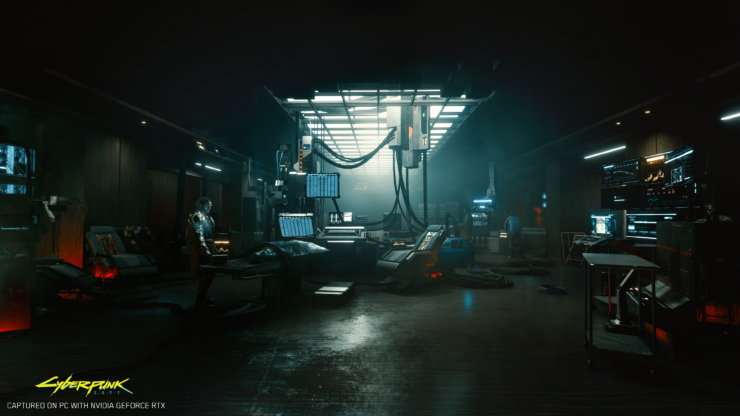 Cyberpunk 2077 RTX Launch Trailer Shows the Game at Its Best

According to PCGamesN, ambient occlusion is less impactful than diffused illumination in Cyberpunk 2077 with the former only adding a bit more depth to the scene.

“Rather it’s the diffused illumination that stands out”, the article reads. “This effect accurately portrays the way light reflects from one object and illuminates others around it. One clear example is the screenshot below, in which the light from the illuminated signs is seen bouncing back off the surrounding floor.”

“This effect has been rolled out in full force during the final boss battle of the E3 demo. V, the playable character of your own design, is locked into the lobby of an abandoned cinema with an irate gang leader that wants to hack you to bits, both digitally and physically. A close-combat battle ensues, with heaps of visual FX engulfing the scene, illuminated across one of the few glossy, polished floors in the building. This scene evidently a shining example of what’s to come.”

“But overall the implementation has been a light touch, at least so far in the game’s development”, the article concludes. “CD Projekt Red has been selective over where and when ray tracing is used, carefully crafting the demo environment to limit its scope. That’s easily done in the messy corridors and broken streets of Pacifica – the run-down district of Night City where this demo takes place – with objects and dirt littering the floor to obscure what may otherwise be illuminated by nearby light sources.”

In other Cyberpunk 2077 related news – the above mentioned 2019 E3 Demo video will be released the public during this year’s PAX West event.

“It's going to happen exactly during PAX West”, CD Projekt Red’s community lead Marcin Momot said on Twitter when asked about the release of the video.

Cyberpunk 2077 will release on April 16 next year for PC, PlayStation and Xbox.