Here are a few of the best custom ROMs for T-Mobile Galaxy S4 SGH-M919. With the amazing hardware specifications of Samsung Galaxy S4, same level of software support is also required to get the most of your incredible SGS4. Galaxy S4 is one of the best smartphones ever created, but it does lack a bit with its TouchWiz UI. Here are a few custom firmware giving your superb performance coupled with good battery life to help your phone meet the expectations.

For those of you who love the feel of pure Android and despise TouchWiz, Carbon ROM will probably become your most favorite custom ROM on Samsung Galaxy S4 SGH-M919. Carbon ROM is an AOSP based custom firmware, hence very light and fast. Carbon ROM has a very Holo like user interface with varied customization options letting you control every bit of the ROM. 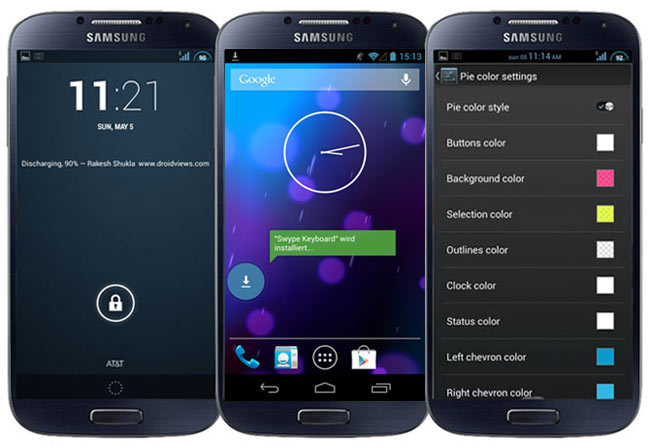 AOKP ribbons, PIE launcher, Holo notifications, theme engine are just a few of the features that Carbon ROM sports along with giving a good battery backup and performance. Some of the other features include:

Carbon ROM can be downloaded in two versions: download the Carbon ROM Nightly with experimental features and latest updates from this link. For the Stable version, download from here to get the stability and performance.

Wicked ROM is extremely customizable and highly tweaked powerful custom ROM that is fast and gives stable performance. Wicked is installed on your T-Mobile Galaxy S4 via Aroma Installer giving you complete power to decide which apps and features to keep. You can choose among a number of home launchers, lockscreens, themes, music apps, boot animations, camera apps, bloat packages and other stuff.

Wicked ROM also gives you complete control over user interface; you can select the clock style, statusbar, audio settings among others. WickedROM will give you stock TouchWiz with improved performance and better battery life. Not to forget the list of additional features!

After the AOSP based ROM and the TouchWiz, Infamous ROM is based on Samsung's stock firmware but is highly tweaked and optimized for some stellar performance. This custom firmware lets you exclusively control only the parts that you want to with the help of 3Minit and Xposed. Some of the notable features of this ROM include:

Download the latest Infamous ROM for T-Mobile Galaxy S4 i9505 from here.

Some of the Best Custom ROMs for Galaxy S4

How to Root ForceROM for Sprint Galaxy S4