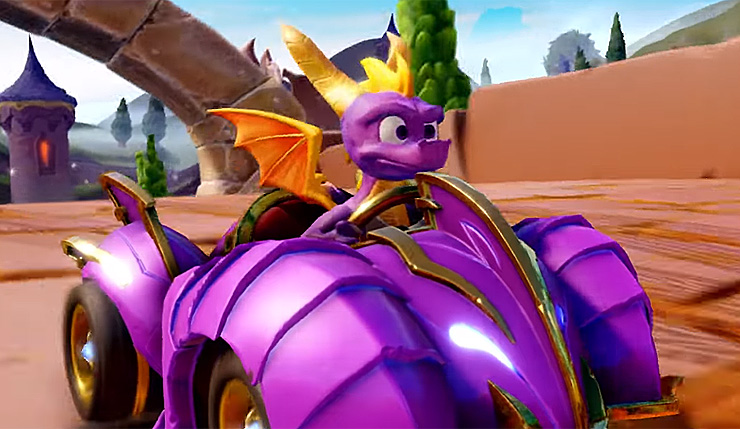 We’ve known Spyro the Dragon was coming to Crash Team Racing Nitro-Fueled for a while, but now Activision has revealed details about the kart-racing crossover. You can check a glimpse of Spyro in action via a new trailer, below.

Crash Team Racing includes Fortnite-like “Grand Prix” seasons, each of which includes a new track, characters, and a variety of challenges spread throughout the game that reward you with Grand Prix points, which can be used to buy special cosmetics. The first Grand Prix offered up Tawna and her “Nitro Squad” and an Egyptian-themed track, and the second gave use baby characters and a dinosaur-themed track. Here’s the official rundown of everything included in the Spyro & Friends Grand Prix:

This season you’ll see Spyro showing up all over the place in CTR -- in the opening menu screen, in the Grand Prix cinematic, and of course, in the game itself. Spyro, Hunter, and Gnasty Gnorc will be added as unlockable playable characters with all of the personality that you come to expect from them. You’ll also see some amazing new karts such as the Spyromobile and Gnasty Ride. In addition to these, you’ll have the opportunity to unlock amazing new decals, stickers and paintjobs to deck out your karts with, and a ton of awesome new skins for characters new and old, such as the Dark Spyro and Gnome Velo skins.

We can also finally reveal some details behind the creation of our favorite purple dragon’s track: Spyro Circuit. Spyro Circuit is a celebration of all things dragon. The design takes its inspiration from Spyro the Dragon all the way down to the gameplay ingredients themselves. Grab Wumpa Fruit from chests, travel through magical portals, and more!

Needless to say, this is the Grand Prix everyone was waiting for – might be time for me to hit the track again! All Grand Prix content is free or can be earned in-game, but players can buy Wumpa Coins with real money in order to purchase some cosmetic items.