As an illustration, ContextLogic was the most discussed stock on Reddit last week, featuring over 3.5K mentions as per a tabulation by r/market_sentiment. Even though the stock’s popularity remains unfazed for now, the sentiment around ContextLogic shares is indeed moderating after a 17 percent drop over the past couple of days, with bullish mentions cratering from 46 percent to just 4.4 percent. 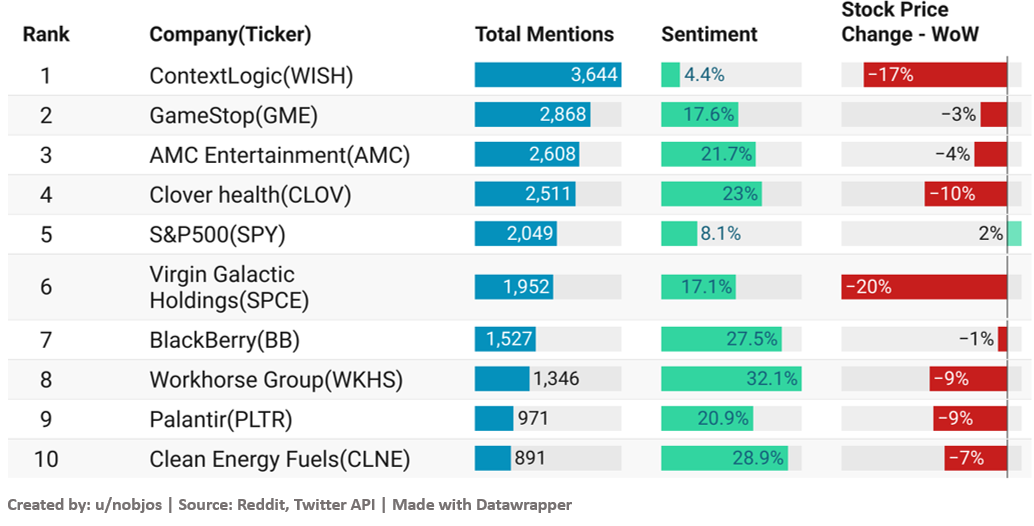 So, what factors are responsible for this brutal plunge in the stock’s bullish sentiment? Well, an eroding path to profitability and a pending class-action lawsuit seem to be playing an important role in moderating the euphoria around this stock. Let’s delve deeper.

As a refresher, ContextLogic's Wish is essentially a digital marketplace for cheap, unbranded goods sourced directly from Chinese warehouses. The products featured on the platform are often knockoffs with questionable quality. Moreover, the marketplace lacks a strong customer support service. Basically, Wish is emblematic of all that is associated – correctly or wrongly – with the Chinese way of doing business, and the company has proudly flaunted this business model. This approach did yield dividends during the pandemic when much of the world entered haphazard lockdowns and disposable incomes took a hit. For instance, the company claimed ahead of its IPO late last year that its platform featured 108 million Monthly Active Users (MAUs). However, as the global economy began to recover, Wish’s MAUs began to shrink. Incidentally, it is this factor that constitutes the basis of a class-action lawsuit.

On the 3rd of July 2021, the law firm Hagens Berman issued a press statement that called on eligible investors to become part of a class-action lawsuit. The complaint alleges that ContextLogic “materially overstated the company’s business metrics and financial prospects” ahead of its public flotation. For instance, by the time of its IPO in December 2020, Wish’s MAUs had declined materially. Yet, the company failed to disclose this information in a timely fashion. It was only in March 2021 that the company declared that its MAUs had already “declined 10% YoY during Q4 to 104 million.” Please note that this information was released around three months after its IPO. Thereafter, in May, ContextLogic disclosed another decline in Wish's MAUs to 101 million while also slashing the guidance for Q2 2021.

One of the most important functions of the stock market is to incorporate future information and prospects in the share price. Here too, ContextLogic fails to impress. The company can’t grow its MAUs without a gigantic marketing budget. In Q1 2021, sales and marketing expenses ate up the entirety of ContextLogic’s gross profit, amounting to $470 million vs. a gross profit of just $437 million. Given the razor-thin margins involved and a declining trend for Wish's MAUs, I find it quite hard to figure out a path to sustainable profits for the e-commerce platform.

Of course, nowadays, it has become a trend to pump anything with a high Short Interest (SI). As per the tabulation by MarketBeat, ContextLogic’s SI currently stands at around 5.38 percent, which is not that high. Moreover, its days to cover ratio is just 0.4. In light of these figures, I am extremely skeptical of a miraculous short squeeze.

Everything looks like a nail to a hammer. A generation of Reddit investors is now being trained to view anything with a material SI as a potential short squeeze. Such investors fail to take into account that often, a sizable SI is a function of markets working efficiently. Perhaps these investors would realize their folly when this current fad ends in tears. Until then, keep pumping!