The Wii-U is Nintendo's next big innovation in the world of console gaming, after stealing the show and sales from the PS3 and XBOX 360 in the past with the Wii and dominating the handheld market with the Nintendo DS series and then the 3DS Nintendo is looking to make a comeback this time around with something no console generation has done before. The Wii-U is another innovative idea which will make it so that console gamers won't need a television to play video games any more and many other robust features are definitely making the console a must buy on a lot of shoppers wish list. 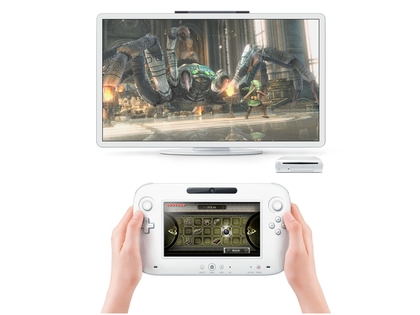 Rumors of the Wii-U continue to pour in but it seems that those rumors can finally be put to rest as the Wii-U has made an appearance on Amazon, while the site hasn't listed a price for the product as of yet we can easily speculate that Nintendo will keep it within the USD $200 - 300 price range. The site gives us complete details on the hardware, internal workings, features and even the launch titles.

The Wii U Release Software Lineup

Wii U will feature a wide variety of exciting first and third party games and software at the time of system launch. Just a few of those players can expect include:

and finally the new controller (Taken from Source)

In addition to its 6.2-inch screen, the new controller also features an accelerometer and a gyroscope, a rumble feature, an inward-facing camera, a microphone and speakers. Adding these features to the Classic Controller button scheme -- two analog Circle Pads, +Control Pad, A/B/X/Y buttons, L/R buttons and ZL/ZR buttons -- will enable a breadth of gameplay experiences while appealing to both casual and dedicated video game players. The Wii U system can also use up to four additional Wii Remote or Wii Remote Plus controllers and is backward compatible to all Wii games and all Wii accessories. The Wii console has sold more than 86 million units globally and greatly expanded the overall audience for video games. Wii U aims to expand that audience even further.

According to Nintendo President Satoru Iwata, "Wii U redefines the structure of home entertainment by fundamentally changing how the TV, the game console and the Internet function and interact together," he continues, "The experience enabled by Wii U and its new controller takes players deeper into their games, while reaching out wider than ever before to be inviting to all kinds of gamers."

A new Wii console experience that fundamentally changes how the TV, game console and the Internet function and interact together.
View larger. 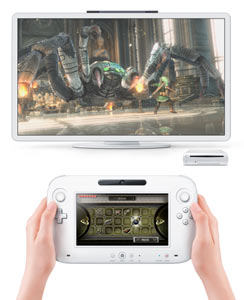 An exciting roster of new games and software available at launch, as well as backwards compatibility to all Wii games.
View larger.

Wii U combines motion-sensing gameplay with the ability to support full HD graphics. Each Wii U console will be paired with a new groundbreaking controller, with its 6.2-inch wide screen. Previously, video games played on a home consoles have been confined to the TV and offered identical viewpoints to each player in a multiplayer environment. The Wii U controller enhances that experience with different viewpoints available in-game and in differing games/game situations. Also, watching TV and playing console games have been completely separate experiences. The new controller removes these boundaries, creating a more dynamic and fluid gaming and entertainment experience.

As you can see the Wii-U and all it's details are here clear as day which means that the only thing still in the air is a proper release date and the price tag on this beauty, other wise the launch titles look pretty amazing with a good mix of first party and third party games which are sure to make this console like hot cakes. Its no secret that Nintendo's fanbase is one of the largest in the world so I am sure that fans across the world will be glad to buy this.