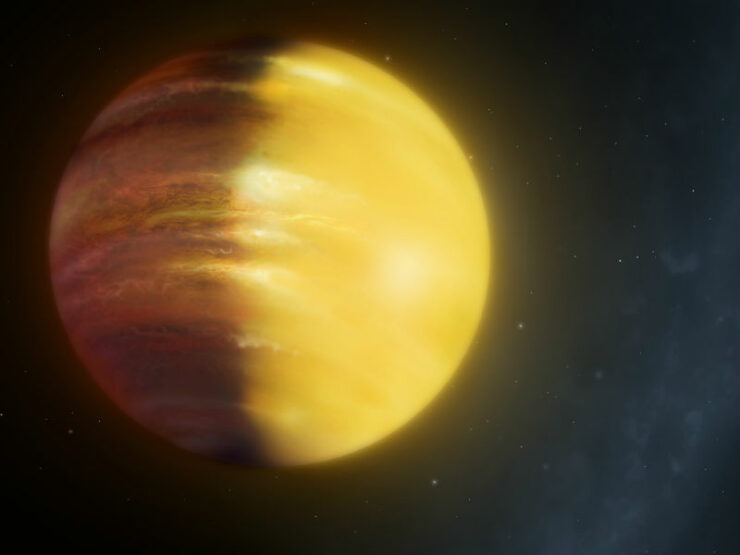 Scientists and researchers have been observing a planet outside of our solar system for the past 4 years now and you may want to know why it is so interesting. This planet is enveloped by clouds and winds which are literally made from corundum minerals, the building blocks of rubies and sapphires!

This planet has been named the HAT-P-7b and is located more than a 1,000 lightyears away from the Earth and is also 500 times more massive. Imagine the hues of bright reds and deep blues in its gushing gasses that surround it.

As gorgeous as it may sound, unfortunately, the daytime temperatures of the planet reach about 2,500-degree celsius. By that temperature, most of the solid minerals with their color here on earth will have completely vaporized. So we are not yet exactly sure what the color of the winds will be at that temperature.

"It’s a hellhole," said one of the researchers, David Armstrong from the University of Warwick. "It depends on what else is in the atmosphere. We don’t know the colour, but it would certainly be stunning."

This planet is located in the constellation Cygnus and has been nicknamed to "hot Jupiter". Why hot Jupiter? Well, the size and composition and mass of the planet is similar to that of Jupiter but it is so closely tied to its parent star that its surface is insanely hot.

After 4 years worth of research on a similar planet’s (HD 189733b) weather, it is bound to give us some more detailed look into this new planet itself.

What the researchers have been able to observe is that its clouds are made of 2 basic minerals: the corundum (a crystalline form of aluminum oxide and building blocks of rubies and sapphires) and perovskite (a calcium titanium oxide mineral used in solar cells).

"There is sufficient available material to form an optically thick cloud for corundum, but less so for perovskite, mainly because Al [aluminum] is more abundant than Ti [titanium]," the team concludes.

The HD 189733b is tidally locked to its star, the same way the moon is to our planet. So the HAT-P-7B can be assumed to be similar. What this tells us is that one side of the planet is cooler than the other. This is responsible for winds to usher through the planet due to temperature difference and evaporate on the hot side.

"These results show that strong winds circle the planet, transporting clouds from the night side to the day side," Armstrong says. "The winds change speed dramatically, leading to huge cloud formations building up then dying away."

More research and investigations will be done on the HD 189733b to give us a better idea of how the clouds will actually look like because it will absolutely be breathtaking.