Just about a few days ago, the eighth generation video game consoles crossed the first year of their life span, which is quite hard to accept figuratively. When launched back in the same month last year succeeding the last-gen hardware after more than seven years, the latest PlayStation 4 and Xbox One consoles were met with fervent anticipation, but despite all the record-breaking sales, it felt like something wasn’t quite right, and now that we are one whole year into the new generation of gaming, here is a chart that explains how drastically the latest generation of PC and console gaming differs from the last-gen gaming. 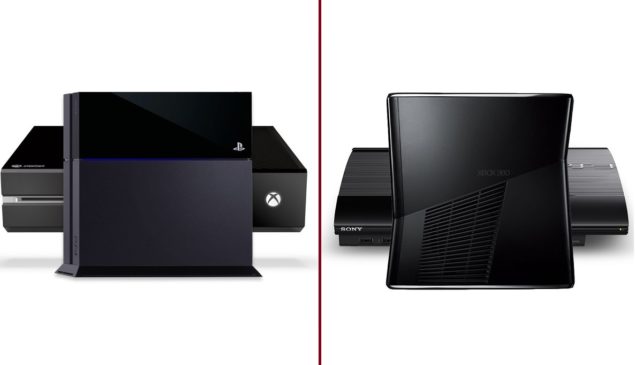 The launch of the latest consoles and the start of eighth generation of gaming (if you don’t count Nintendo Wii U in the process) was a very robust and earnest one, but despite all the hype, record-breaking sales, and big talks, there was that feel of something being missed out. Through the time till now, it has been somewhat settled that console gaming has become stagnant and is not progressing efficiently any further, yet still, the new generation of PC and console gaming differs drastically from the last generation, with several changes that have completely over turned the continuous state of affairs.

The start of a new generation of gaming opens paths for technological innovation, and brings about a fresh start for software developers as well as gamers. Though, rather than providing a fresh start and a jump ahead, the eighth generation of consoles feels like somewhat of a diverse case and a step back. Big players like Activision, EA, Ubisoft, and other are marching ahead by taking advantage of their customers, and releasing the so-called triple A video game titles which make gamers doubt the start of the next generation by keep on getting dipped into the water.

PC, however, is progressing towards the bright side and is growing stronger. Not only big manufacturers are focusing on PC hardware, well-known as well as small video game developers are also recognizing PC as a dominant console and are largely developing for it. Steam sales and value-focused deals come as an added plus, as they make piracy feel quite useless and unnecessary. All in all, the latest eighth generation of PC and console video games is drastically different, and is completely opposite to the last generation of video game.

Have any thoughts on the topic? Share them with us in the comments section below.
[socialpoll id="2234370"]