Black Ops, one of the most highly anticipated games gets leaked VERY early before its release date, almost 20 days early in fact, before this game Halo: Reach was leaked and it was followed by a ban wave from Microsoft and before Halo: Reach Modern Warfare 2 was also leaked on the XBOX 360. Here is a video showing a pirate running the game up to the first mission briefing (at least that's what I think this is)

EDIT: Video got removed by Activision due to copyrights so here is a picture instead.

They say a picture is worth a thousand words; lets start with leak 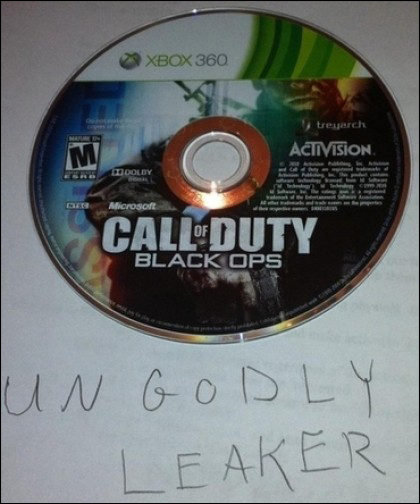 Whenever a game like this gets leaked for the 360 Microsoft ALWAYS begins a ban spree on those stupid enough to go on Live with their pirated copies of the game, its a shame that such a magnificent game had to get leaked early and make us people who own PS3's and PC's avoid spoilers just like the spoiler fiasco when Halo: Reach got leaked.

Activision is certainly not going to be happy about this but maybe this is a good thing, if I do find someone who has a pirated copy of the game I can ask them whether the game is really worth me paying for the PS3 version or not.

Those of you with hacked consoles and are planning on buying the game I highly recommend you keeps your XBOX's off the interwebs until the banhammer lightens up, but the main fun of a Call of Duty game does come from the online of it so these guys will be stuck without online play for days which is kind of a downer isn't it?