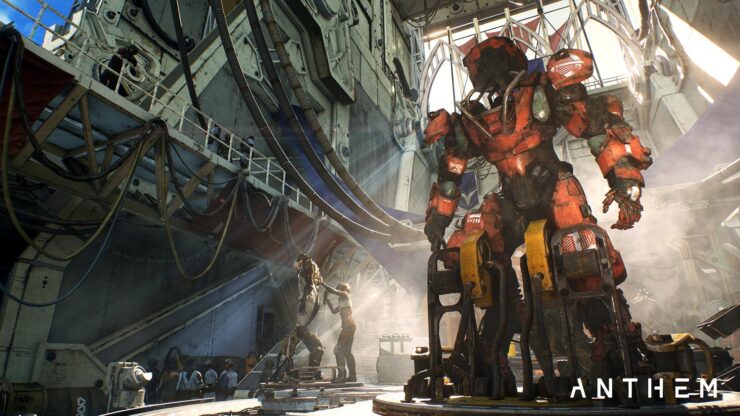 According to Hudson, known for his work on the Mass Effect trilogy as well as Jade Empire, Star Wars: Knights of the Old Republic, Neverwinter Nights and Baldur's Gate II, Anthem will finally solve the age-old issue of how to implement a proper story in a multiplayer environment.

I talked last time about Anthem being “a story you can experience with friends.” There were, understandably, some questions and concerns about story in multiplayer. Specifically, “what if I don’t want to play with randos?” “What if I don’t have friends that I play games with?” And, “I like to be the one making choices in my story—if it’s multiplayer, won’t the story get watered down?”

As a player, I worry about these things too—which brings us to the last line of our mission: become the hero of your story. In a BioWare game, you should feel like the story is about you. You create your own character, you decide what happens next, and you become the hero. I think the reason people are concerned about whether these things are possible in a multiplayer game is because it just hasn’t been solved well before.

With Anthem we’re taking this problem head-on and structuring the entire game design to provide a specific solution for this. We’ll be sharing details on how it works very soon. We think it creates a unique experience where you have control over your own story, but your story is set in an ever-changing multiplayer world. And yes, even though Anthem is meant to bring out the best parts of playing as part of an online community, you can choose to play through the story with only your friends, or even on your own.

It’s true—we’re trying something really different here. Anthem represents one way to deliver innovation and new experiences in the spirit of our mission. We also have teams envisioning future BioWare games, and they’re designing approaches that are different from Anthem—including one that’s very Dragon Age. As we try new things, I hope that you’ll come on the journey with us, and continue asking questions that will help shape Anthem into something we’ll all love to play.

Needless to say, these lofty promises only fuel the already strong hype surrounding the game. Concluding the blog post, Hudson promised 'lots more details' on how Bioware plans to implement the aforementioned structure during EA PLAY's Showcase, scheduled to take place at 10 AM Pacific Time on June 9th.

Anthem has been recently confirmed by Electronic Arts to be due on PC, PlayStation 4 and Xbox One in March 2019.