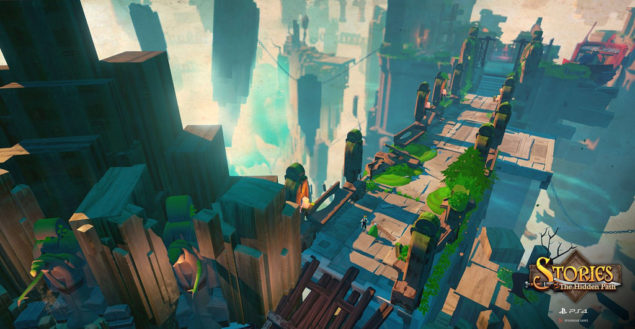 As the sole survivor of the vanguard, sky corsair Reynardo is the last line of defense against the mighty imperial armada about to overtake the entire realm. Reynardo fights against impossible odds, knowing that the fate of everything he holds dear rests on his shoulders.

Welcome to Stories: The Hidden Path, an action-RPG set in a vibrant universe filled with floating islands, majestic airships, and flamboyant magic.

Every choice you make in Stories affects the storyline in real-time, and the narrator adapts his tale dynamically to reflect your course of action. With beautiful illustrations at every turn of the page, Stories will have you diving deeper into the narrative nuances each time you play.

Spearhead Games Co-Founder Simon Darveau (who worked as Design Director on Assassin's Creed III) talked about the game on the official PlayStation Blog:

We’re building Stories to feel like an enchanted book with a different tale to tell each time you open it.

We want to make Stories more than a traditional action-RPG, so we’re crafting a fresh storytelling system that we think will bring extra charm — and maybe even a few surprises — to our newest title. We’re super-proud of how the game is turning out and very excited to share more with you all in the coming months.

Stories: The Hidden Path will be playable at PAX Prime in late August, so if you're attending you might as well check it at booth #6912; the game is coming "soon" according to the developers. Enjoy these first screenshots and the debut trailer!