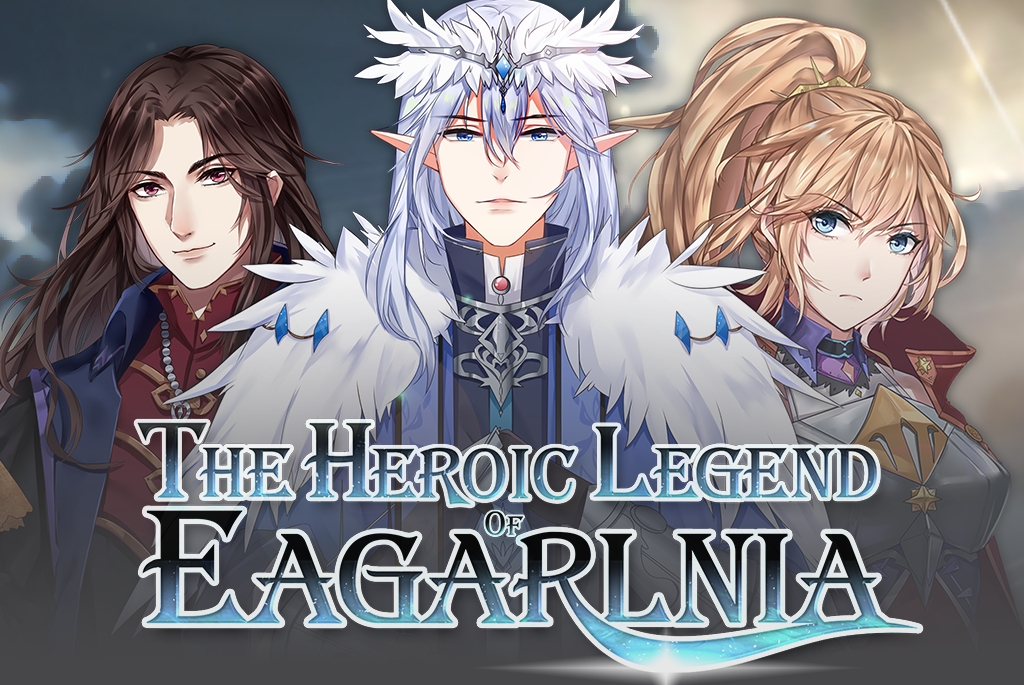 China will be one of the biggest driving points for all video games. For at least a decade, Hollywood has been acutely aware that success in China can and will make or break a film. Video game developers and publishers are acutely aware of China's growth potential, which is why we've seen many controversial issues. I'm not going to cover those again, though, because I want to talk about the most exciting aspect of gaming's rise in China: developers. These are what will lead to more games like The Heroic Legend of Eagarlnia.

Mobile and free-to-play PC games are already developed to a high quality in the country, and some free-to-play titles like Genshin Impact already have that big-budget feel. Still, it's been a while since we've seen full "made in China" releases like Alice: Madness Returns. Fortunately, quality indie titles like Devotion and Eastern Exorcist are paving the way. Adding to that list is The Heroic Legend of Eagarlnia, a game that is quickly making me an insomniac. 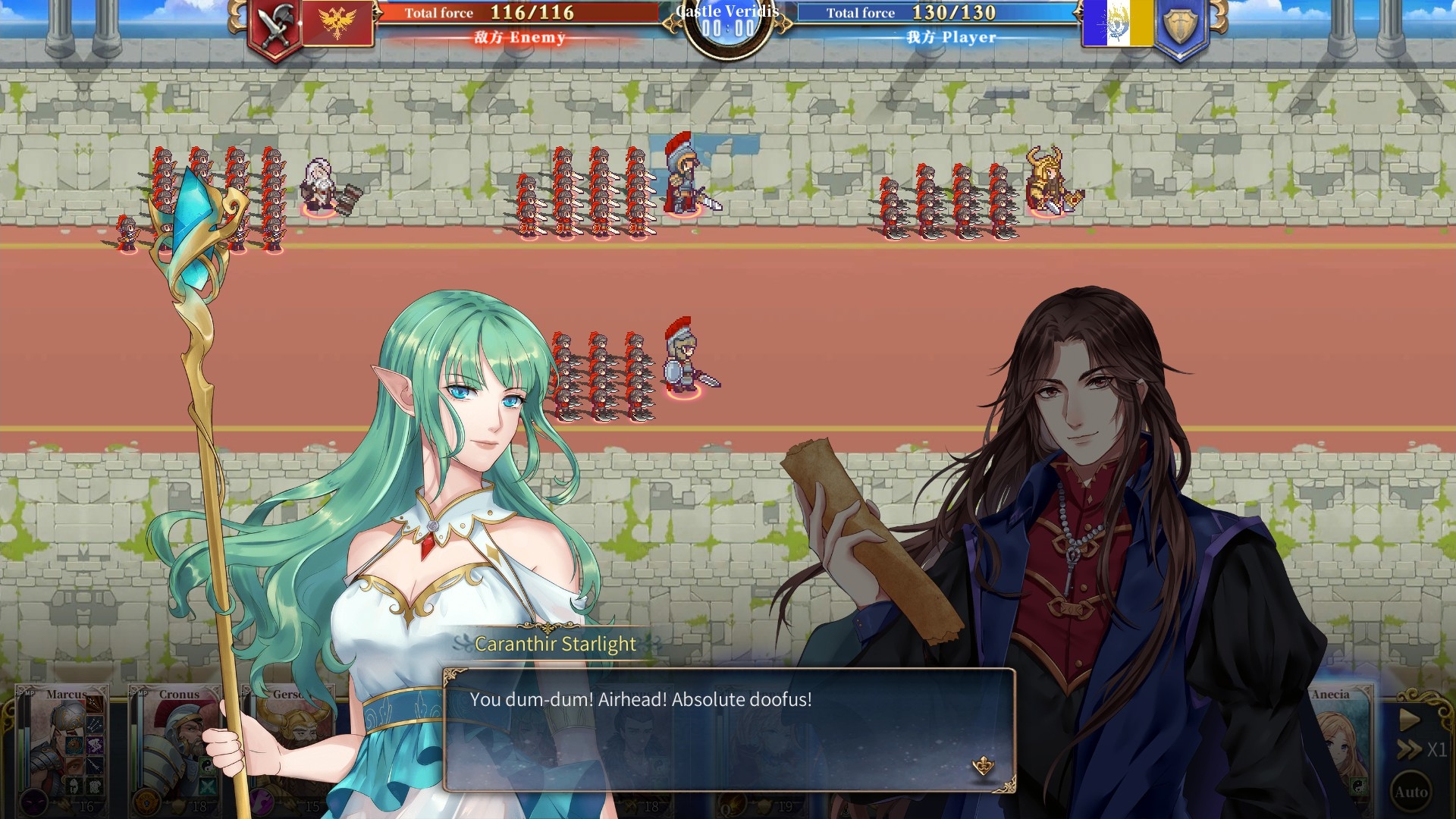 Let me get the criticism out of the way early on. HongShou Studio, please hire people more adept at localisation. If that's not possible, hire a natural English speaker - or even find a volunteer - who can proof-read the text. This isn't anywhere near as bad as the mess found in Orange Cast. This can even be charming, but it's still bad and always sounds unnatural. It also impacts learning different aspects of the game, especially since there's so much on offer. I need to learn Mandarin; I could be the localisation master for the whole industry.

My other main complaint is balance. If you've played a grand strategy game like Romance of the Three Kingdoms, or a game like Total War, you'll be used to having the option to automate a battle. I'm not sure if I'm just a god amongst men, or the game has fundamentally screwed up the balance when automating, but it's rarely a good option not to fight if you've significantly upgraded your troops. Fighting the battle, you're going to see that advantage. Automating, you won't. 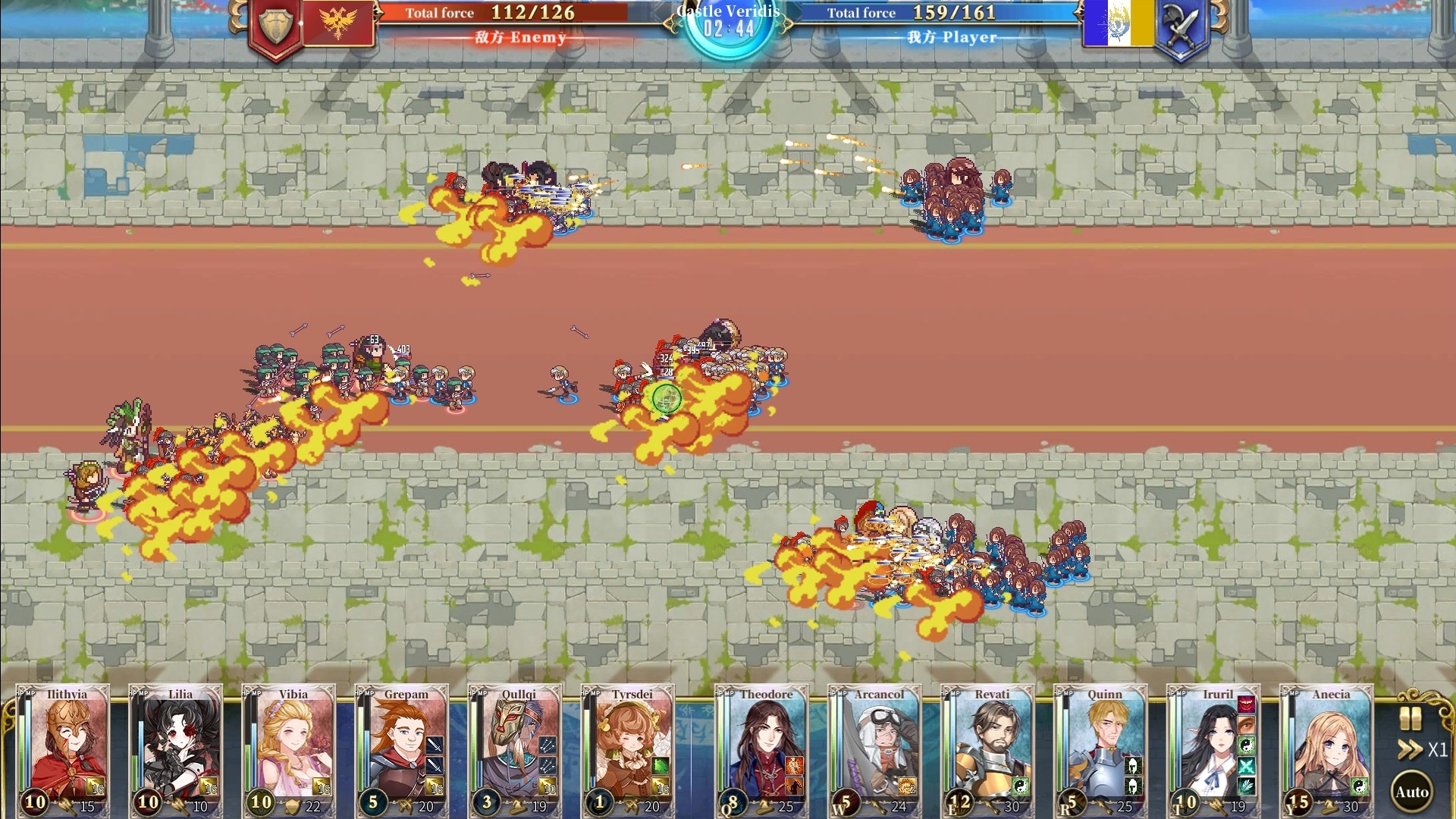 Now, those issues aside, when I've been playing The Heroic Legend of Eagarlnia, on more than one occasion, I've looked up to see that somebody has been messing with the clock, and it's almost, or even gone past 3 a.m. So yes, I've been massively engaged, and that's because there's so much going on that it's impossible not to find yourself dragged in, though some things are going to feel like wading through treacle, even if they're ultimately worth it.

Nobody really comes into these games looking for the story. Even those going into Three Kingdoms, Total War, or other similar titles aren't that interested in the back story; it's all about the emergent story that gameplay gives you. You'll find a drive to tell a story here, one that even plays through in the gameplay itself. Each army has links to another. You may have relatives on different sides of a war or others that have heard of the fame of another. It feels like a way to mimic the friendship system found in Three Kingdoms, and it works.

When you capture a character and want to recruit them, or if you're attempting to 'lobby' a hero from another faction, you're going to want to use a character related to or friends with that character, or even those with a rivalry and respect for each other. This link will be reflected in the percentage chance of success. Some of these links can be found by reading through the many stories of characters or dialogue before a fight, or you could look at a map on Reddit. Other times, you'll see an icon in the top corner of a character's profile. I also believe that the alignment of characters is meant to influence this and if they can even join your faction, but I've had a mixture of chaotic, lawful, good, evil and neutral, so I don't think that's been implemented yet.

Either way, there are hundreds upon hundreds of characters. Many of them have a huge amount of story text that you can read, which can build up a sense of the world HongShou Studio is trying to build. They all also have their own talents, some of which impact battle and others that help outside of battle. Skills that can be used within battle and proficiencies with different unit types, of which there are six, which is of key importance when you get into battle. It all leads to a lot of balancing, particularly when you bring in the empire-building aspects. 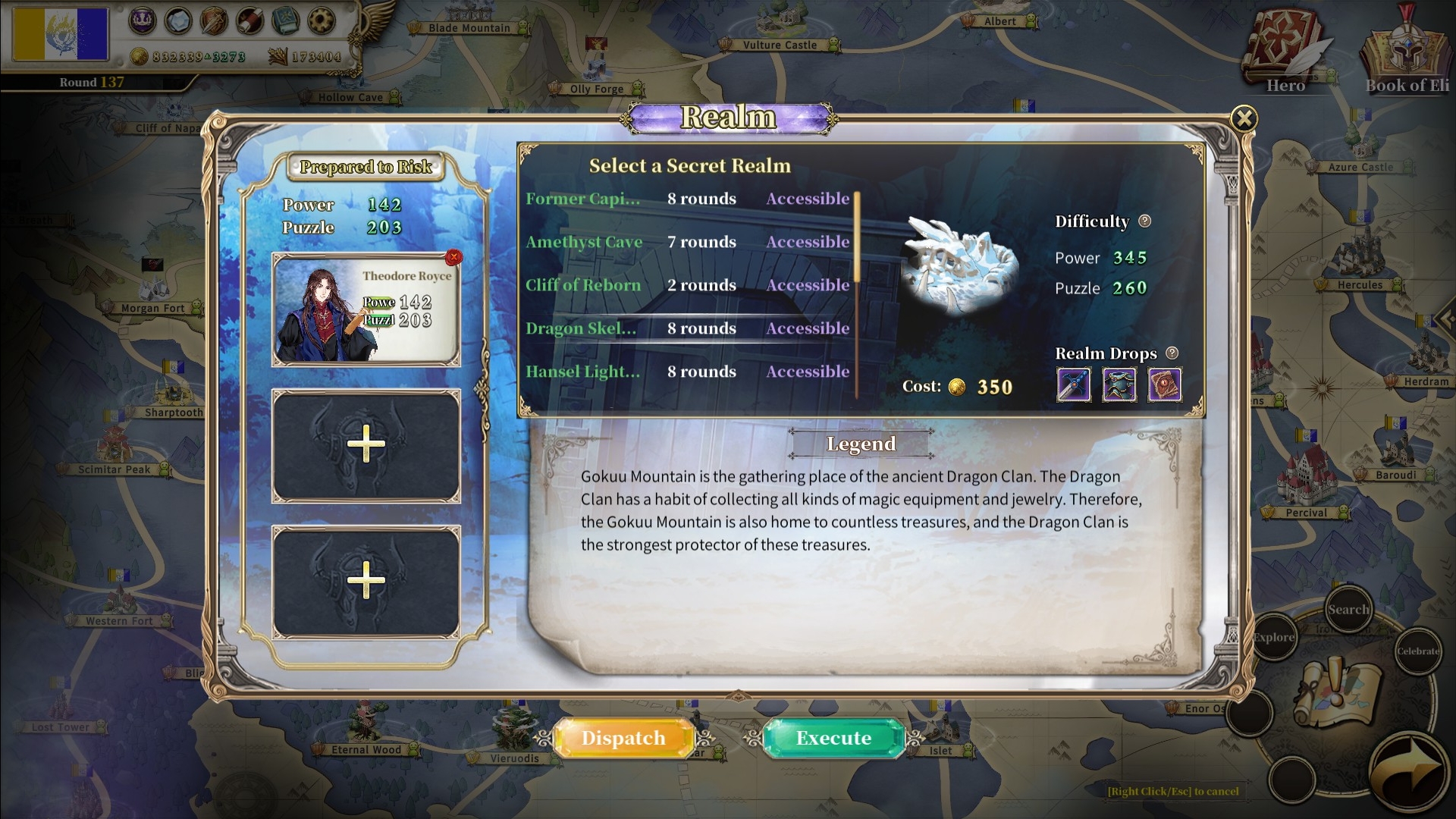 You're going to have to balance city development (invest) as well as building up the city walls (build). You can send a hero to search within your cities for various rewards, such as a new hero, gold, equipment or - if the RNG doesn't like you - nothing. Other features include a mini-RPG mechanic where you can send off up to three heroes to explore ruins in the world, returning with various rewards if their stats are high enough. An equipment system can improve these very same stats, supported by a quest system that can ultimately give you items with incredible stats to boost your heroes.

This is only scratching the surface of The Heroic Legend of Eagarlnia. Diplomacy, unit training and levelling, character experience and levels, a city happiness system impacted by taxation levels and the ability to throw celebrations all having an impact on the game and how well it'll be going for you at any given moment. This doesn't even factor in the fact that you can only use a limited number of heroes in battle, dictated by the camp system, and the ability to appoint four heroes in governmental positions to impact different aspects of the game further.

That's when we can finally look at the battle system, which is... different. I like it, but at the same time, there are things that I would improve. What I do enjoy is the side-scrolling, 2.5D aspect of the battle system. Add onto this unit positioning and the six types of unit, each of which has its respective strengths and weaknesses, and you end up with a system that has an amazing potential for strategic depth.

Add hero skills, and this is somehow both improved and quashed at the same time. The skills can be great, watching your mage lob fireballs on all enemies or having your sniper target the weakest of enemy heroes. Using these at the right time should be fantastic. However, this isn't how the AI works it, and ultimately, neither will you. You'll wait for the cooldown to end and mash the relevant activation key like it's going to give you gold, not worrying about mana conservation in the slightest. This is simply because the cooldowns seem arbitrary, and the AI spams them more than... a tin of Spam. 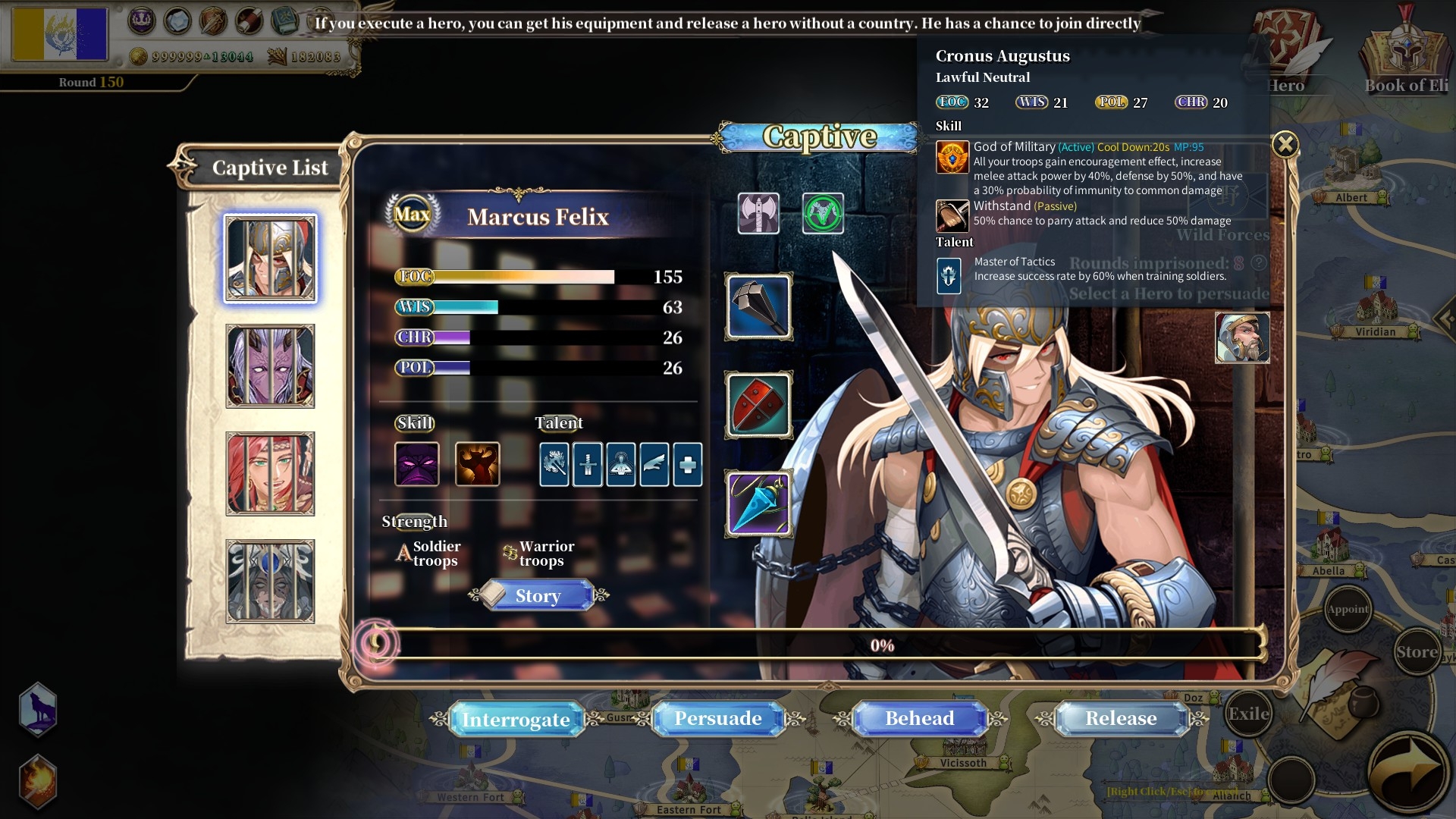 It should be remembered that The Heroic Legend of Eagarlnia is still in early access, so complaints about localisation and the desperate need for proof-reading could certainly be sorted by release. It was only earlier this month that more improvements were said to have been made to the text. In terms of gameplay, it could be balanced a little better. There are improvements still in development, such as attacking a city manually rather than always being an auto-attack. Even with these things to be developed, I more than recommend this to fans of the genre.