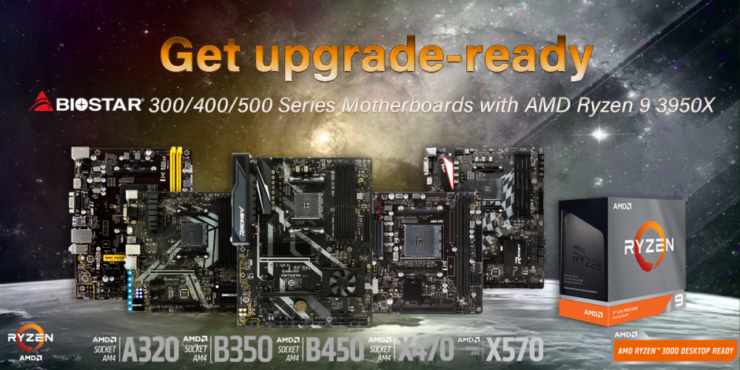 With the release of the Ryzen 9 3950x all set for tomorrow, November 7th, BioStar is getting ready by having a firmware update released yesterday so their motherboards would be ready for the 16-core 32 thread processor.

Biostar's motherboards will be updated with the newest AGESA 10.0.0.4 B Patch which will unlock support for AMD's flagship mainstream chip, the Ryzen 9 3950X & would also significantly improve boot times. The supported motherboards for this update will be the X470, X570, X370, B450, B350 and the A320 chipset series from Biostar.

The Ryzen 9 3950x will draw a lot more power, not only because of the 16-core count but also the higher boost clock speeds, dual-channel memory support for up to 3200Mhz. These features might be too much for the A320 and B350 chipset boards seeing as the rated TDP for this CPU is 105 watts, although the A320 motherboard seemingly only runs CPUs up to 8 cores (or a TDP of up to 95 watts) which means that the A320 motherboard will not support the Ryzen 9 3900x when it is running at 100% load. The A320 and B350 will not be able to access the full power of the AGESA 10.0.0.4 update seeing as they would not be able to use the PCIe gen 4 speeds and would be locked at the PCIe gen 3 speeds (due to chipset limitations).

The best motherboard to pair both this update with and the Ryzen 9 3950x would be an X570 or X470 board as they are able to take the most advantage of the faster boot times and faster boot clocks when pairing this CPU along with any high-speed DDR4 RAM.

Two motherboards that would offer the best features with this update would be the GEN4 RACING X570 and X470 from BIOSTAR. One of the only other companies to offer an update with the AGESA 10.0.0.4 with the updated patch to include the upcoming Ryzen 9 3950x would be MSI from the recent press releases. So if you have either a BIOSTAR or an MSI motherboard I would update to the AGESA 10.0.04 update, even if you don't plan on picking up the Ryzen 9 3950x because of the performance gain in boot times and overall clock speeds.