Six years since the release of Fallout 3, an open world action role-playing video game that still has its radiant tone to it; and after lots and lots of speculations, rumors, teases, petitions and what not, Bethesda finally prepared itself to greet us with a title that has been circling around for years, just waiting to see the daylight. Unfortunately; years of wait could not withhold players’ growing lust for miraculous visuals, and so, Fallout 4’s reveal trailer didn’t please many. But Bethesda doesn't care, as the developer believes the game "looks amazing." 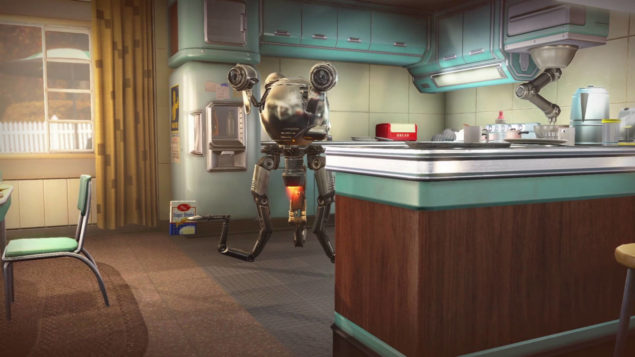 Bethesda finally took the internet by storm last week by announcing a title that every single gamer who has traversed through the post-apocalyptic world of Fallout had been desperately waiting for. The reveal trailer for Fallout 4 showcased a vibrant and diverse world, unlike the brown and shady world of Fallout 3, yet it left a large number of the desperate audience discontented.

While millions of gamers rejoice at the return of a video game series that has so much to offer, a significant amount of the crowd grumbles about the latest title’s graphical fidelity and in-game animations, claiming that it looked like something from the last generation. Bethesda, however, is sure that Fallout 4 “looks amazing,” and is nothing like people claim it to be. Replying to a fan on Twitter Bethesda VP of PR Pete Hines said that he doesn’t have any time or energy to care about what complainers think about Fallout 4, as he himself believes the game looks amazing.

@alexxmoose @NVaun game looks amazing. i dunno what they're looking at.

That flat-out statement apparently shows how confident the developer is about its new game. Perhaps Bethesda decided to save its fans the disappointment by not showcasing an overblown, pretentious trailer with visuals that only keep it to trailer and gameplay videos. The fact that Fallout 4 will never come to the last generation PlayStation 3 and Xbox 360 consoles is another reason to believe that the upcoming most awaited game will be much better than many fans expect it to be after watching the reveal trailer.

Bethesda’s Community manager Matt Grandstaff apologized on NeoGAF for the lack of clear mention of last-gen consoles on all preorder information, and clarified that their intention wasn’t to mislead the fans. "I apologize, my intention wasn't to be cryptic," he explained. "On our game websites, we list the platforms the game at the bottom of the page. It's also called out in our press release. We don't list platforms if we're not developing the game for them. As another example, you won't see PlayStation 3 or Xbox 360 listed at the bottom of the product page for Wolfenstein: The Old Blood -- that game isn't going to be on those platforms, either."

He further stated that Fallout 4 will never make it to the PlayStation 3 and Xbox 360 consoles because of the way the game is being developed. "It is not coming to 360 and PS3," Matt wrote. "The stuff we're doing will never work there."

Set in a post-apocalyptic version of Boston and the surrounding Massachusetts wasteland, Fallout 4, being a next-gen exclusive title, is targeted to release on PC, PlayStation 4 and Xbox One. Bethesda has not spoken about when the game will be made available for purchase (an announcement can be expected next week at E3) but if the rumors are true, it will be out later this year.