SW Battlefront Infographic Reveals That Players Prefer ‘The Dark Side’

DICE and EA have released a Battlefront infographic for the recently released Star Wars shooter with some interesting facts. 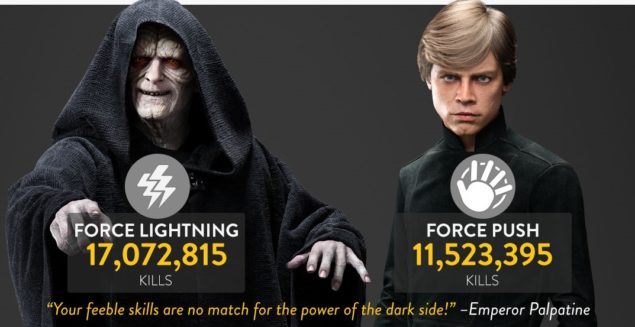 Star Wars Battlefront released less than a month ago on November 17 for PC, Xbox One, and PS4. EA Access (on Xbox One) subscribers were able to play the game ahead of its release for 10 hours.

“Based on the ongoing strength of our business and reception of Star Wars Battlefront, we are raising out full-year outlook for the second time. Our markets are very healthy, the digital transition continues to drive margins, and engagement in our live services and excitement for our upcoming launches is exceptional”.

Now, 3 weeks after Battlefront’s release, DICE and EA have created a infographic, revealing some interesting statistics. Check out the infographic below.

For instance, players seem to favour the ‘Dark Side’ of the force with 17,072,815 force lightning kills, compared to ‘only’ 11,523,395 force push kills.
While 36.3 million AT-AT’s have been brought to the ground, less than 1% of those kills were made using the Speeder and its tow cable.

Talking about the AT-AT, the Empire’s vehicle is the deadliest in the game with 61 million kills in the AT-AT.

Another interesting fact is that Boba Fett is the most played (in minutes) hero, with 29.8 million minutes played. Luke comes in 2nd, while The Emperor seems to be the least played villain.