DICE has released a new trailer showcasing their flagship AAA title Battlefield 4 multiplayer with intense action. As we know already, Battlefield 4 is a true next-generation experience arriving on all gaming platforms on 29th October 2013. 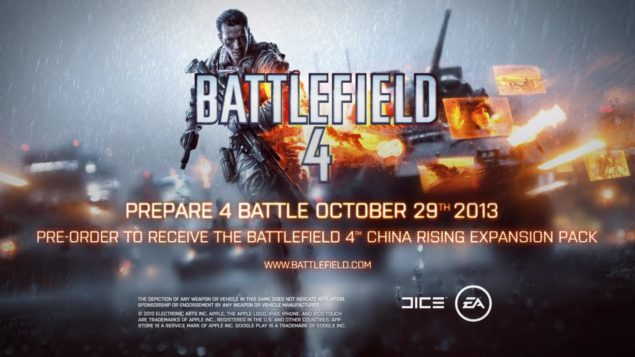 Battlefield 4, which is built upon DICE's Frostbite 3 engine features LEVOLUTION, a dynamic effect that let's players change the game they play through their actions. Destruction has always been a key part of Battlefield games and Battlefield 4 takes it to the next level with LEVOLUTION by making each map featuring effects that dynamically alter the environments on the map such as destroying a large skyscraper which would make the city streets fill up with rubble affecting player sights, breaking apart huge dams which would leak large amounts of water to deliver an amphibious combat action. These are just a a few examples of LEVOLUTION and as can be seen in the trailer, there would be several more allowing players to blow apart large antennas, falling chimneys from factories, etc.

At launch, Battlefield 4 would feature 10 distinct map packs some of which we know include Siege of Shanghai, Paracel Storm, Golmud Railway. Each map could be player with 7 different gameplay modes and more maps and modes which would be introduced later on with 5 DLC Map packs to premium users who get 2 weeks early access to the packs, 12 Battlepacks, Priority server cues and more. The DLC Packs are listed below:

This is Battlefield 4 Multiplayer - Gameplay Trailer

For our main PC audience, we already gave you a detailed look at the system requirements for Battlefield 4 which can be found below:

The Battlefield 4 PC System requirements are mentioned below:

Backed by powerful features such as Battlelog 2.0 and LEVOLUTION, Battlefield 4 is set to impress. Following are some of the features of Battlelog 2.0 which make it stand tall against other titles, full list of features can be found here:

But the most amazing thing about Battlelog 2.0 is that players would be able to fully integrate it not only with their PC’s and Console devices but also their mobile/handheld platforms allowing real-time information on your Battlefield 4 game and multiplayer progress within the palm of your hands. You can customize your loadouts and at times when you are out of home, you can check in what server’s your friends have been playing on and from your handheld device join into that server so as soon as you get back home, you are ready for some Battlefield 4 action without having to wait in Queue.

Another cool feature regarding the Battlelog 2.0 is that you can use your tablet device as a second screen for Battlefield 4 multiplayer. The Battlescreen as so DICE calls it displays a mini-map which shows you, your squad and enemy positions and is really handy incase you are sitting on quite a distance from your display. This mode is also useful and related to the Commander Mode as displayed back at the EA’s E3 showcase of Battlefield 4 MP which demonstrated the commander using a tablet device to set attack points, give orders to entire squads and deploying artillery strikes.

This is Battlefield 4 Multiplayer Screenshots: