Battlefield 4 is the EA's biggest shooter right now. The game was released last year on all gaming consoles except Wii U and it showed high graphical rates on PC. The game only came with DirectX support but AMD fans were promised that they would get a new Battlefield 4 patch that would bring Mantle support to the game. The patch was delayed but now AMD has demonstrated Battlefield 4 running on Mantle with up to 45% performance boost at CES 2014. 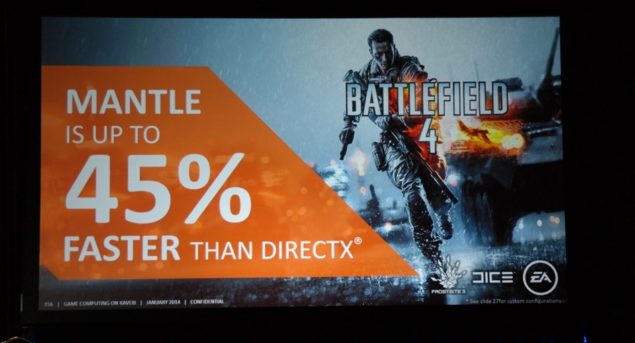 AMD and DICE were to release a Battlefield 4 update that would enable game's support for AMD's low-level graphics API called Mantle, but it did not happen and the update was delayed. A couple of screenshots were leaked prior to AMD CES 2014 presentation showing 45% Battlefield 4 performance boost with Mantle over DirectX, AMD said that the company's new API would bring 10% improvement in games' performance while running on same hardware, but these images revealed (and was later confirmed) that the performance would be far greater.

Back in December, when asked by Polygon for a comment on delaying the Battlefield 4 Mantle Patch, the chip and graphics cards manufacturer said, “After much consideration, the decision was made to delay the Mantle patch for Battlefield 4. AMD continues to support DICE on the public introduction of Mantle, and we are tremendously excited about the coming release for Battlefield 4! We are now targeting a January release and will have more information to share in the New Year.”

Reportedly, according to the representative of the company, the Battlefield 4 Mantle update was delayed because EA decided to stop working on all expansions of the game until the already present issues were resolved. Now AMD has announced that Battlefield 4 Mantle patch would be available to the users later this month offering much greater game performance.

AMD also showcased Battlefield 4 running on its new Low-level graphics API that is designed to bring the hardware capabilities of modern graphics cards more directly under the control of game developers. Battlefield 4 was claimed to be running 45% faster on Mantle than the DirectX, however, AMD revealed no performance comparison slides between DirectX and Mantle. In the gameplay video below you can see Battlefield 4 performing 45% better with Mantle.

If AMD's performance quote is accurate, then it would be a great leap in PC gaming, gamers would be able to get much great game performance with their same old AMD graphics cards. Currently, Mantle is still in its initial stages and is lined up for support only in over twenty games, which include both current and next-gen games such as Battlefield 4, Thief and Sniper Elite 3. Battlefield 4 Mantle update would be coming later this month.