The classes for Battlefield 3 Multiplayer have been detailed, while the same roles are being reused from Bad Company 2 there are a few noticeable changes now, Each class has a new ability which they didn't have before and the medic class is now an assault class. Over all the character models look awesome but these are just the US soldiers, I can't wait to see what the other character models will look like once future details come out or maybe when the final game is released. But for now head on inside to see what changes have occurred to the classes in Battlefield 3. 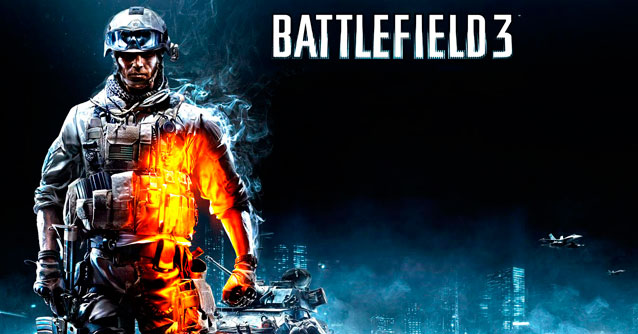 Battlefield 3 is a huge title coming this year for the PC / 360 / PS3 it offers a great multiplayer experience and a lengthy single player campaign too, but I am sure that the most important feature of this game IS the multiplayer itself over anything else. Bad Company 2 did a fantastic job in bringing tactical based game play with huge maps, dedicated server support, free map packs and much more. I am not expecting any lesser from Battlefield 3 infact I am expecting Battlefield 3 to do the impossible which is to steal the limelight from Modern Warfare 3 and maybe even be THE FPS game of 2011, EA's E3 keynote was awesome and their Battlefield 3 demo really stole the show considering how this game is turning out it's not surprising that DICE has decided to give the public a sneak peak into the upcoming classes of the game. 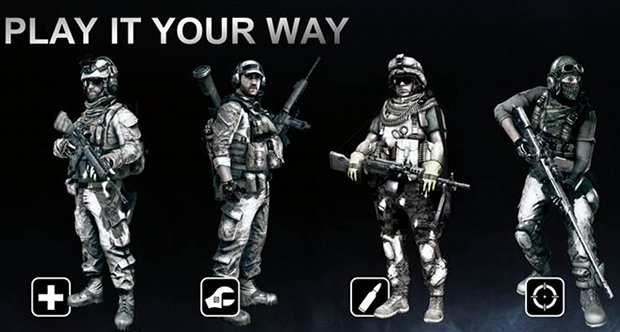 Bad news is the Medic Class is now an assult class, in Bad Company 2 the medic would start off with using a combination of Med kits and LMG to earn points to unlock the defibrillator but now it seems that they will play a more aggressive role as assault class instead.

While every other class like Recon and Engineers are more or less the same (Sorry to tell you this but there is no dedicated Medic class now) The recon class will be given more gadgets and scouting equipment so he is encouraged a more active role in the game rather than hiding on the roof of a house or in the trees using his camo, andthe engineer class will be given a similar treatment so that he can help in taking out enemy artillery.

You can see the complete details of the classes below:

Assault classes
Assault classes will assume the responsibility once held by the Medic class. This class will come with medkits and defibrillators to assist those wounded players.

Engineers Class
Engineers will be able to repair damaged equipment and damaged vehicles, the class will also be more adept to destroying mechanical things as well. This class will be equipped with the Carbine class of weapons.

The Recon class
The Recon class (some of you may recognize them as the Sniper class) will make use of new gadgets and scouting equipment. DICE wanted to make the Recon class more of a team-oriented class instead of just the "shooter on the roof" type.

Medic class
There will be no Medic class it will be replaced by Assault classes.

There is a new class called support who will help provide suppressing fire with the use of artillery and LMG's.

Below is a full detail on the Support class itself:

Support class
The Support class will be tasked with using suppressive fire as well as carry light machine guns. This class will also be able to utilize heavy artillery.
“Support has always been about heavy infantry firepower from his LMG,” said Alan Kertz, senior multiplayer designer at DICE. “It’s a role that we’ve wanted to feel different than Assault’s running and gunning.”
Two new features will be included with the Support class; Bipods and Suppressive Fire.

Suppressive Fire will be an in-game effect that only the Support class will see that will blur the screen in real time as bullets whiz by. Bipods provide “substantial increase in stability while laying down a base of fire,” and can be utilized just about anywhere. The Bipods provide better accuracy and reduce recoil.
“Supported shooting with Bipods and Suppressive Fire finally allows us to achieve an obvious difference between Assault and Support, since the heavy LMGs are not terribly mobile,” explained Kertz. “When deployed with a Bipod, they become an incredibly powerful force. Suppressive Fire forces the enemy to keep their head down and lets the Support gunner pin his enemies in place so teammates can flank.”
Battlefield 3 is out in October for the PS3, 360, and PC.